New Epstein accuser says he raped her when she was 15

‘He forcefully raped me’: New Jeffrey Epstein accuser claims she was approached by billionaire’s staff outside her high school when she was 14 and then attacked in his mansion after being made to perform massages on him

Another woman has come forward to accuse Jeffrey Epstein of sexual abuse, claiming that he ‘forcefully raped’ her when she was 15 after a member of his staff ‘recruited’ her from her Upper East Side high school.

Jennifer Araoz, now 32, was 14 when she said she was approached outside her high school by the billionaire’s staff in 2001. The school was around eight blocks from Epstein’s Upper East Side mansion which was raided this weekend.

Speaking for the first time on NBC’s TODAY on Wednesday, Araoz said that the woman who approached her told her she knew a kind man called Jeffrey Epstein who could help her and brought her to his townhouse to meet him after going to the school several times, offering to buy her soda.

The first few times she was there, the woman who had approached her was present, but eventually it was just them.

When they were alone, she said Epstein took her to a room in the house he called his ‘favorite’ which contained a massage table.

There, she said he forced her to strip down to her underwear and perform massages on him while he masturbated. He would give her $300 afterwards, she claimed.

These massages continued for several months until the fall of 2002 when, she says, he brought her onto the table and ‘forcefully raped’ her.

She ran out of the house afterwards and never went back again, she said. 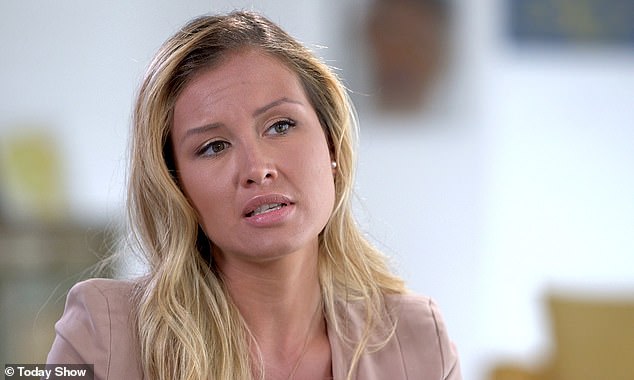 ‘He forcefully raped me knew exactly what he was doing and I don’t think cared.

‘If I wasn’t afraid to come forward sooner than maybe he wouldn’t have done it to other girls. I feel really guilty,’ she said.

Epstein’s lawyers questioned her credibility, according to NBC.

She approached them through her own attorneys last year to try to arrange an out-of-court settlement but no agreement was ever reached.

Now, she says she is considering filing a lawsuit against him but wants to know more about the other allegations against him.

Araoz was a student at the The Talent Unlimited High School when she was approached by Epstein’s assistant in 2001.

She described her as a brunette woman who was friendly to her and seemed to sense she was lost.

The teen, who grew up in Queens, was still mourning the death of her father who died of AIDS two years earlier.

She says she was vulnerable – a word used by prosecutors to describe three victims allegedly abused by Epstein between 2002 and 2005 in New York and Florida.

Araoz said that the first time she spoke to Epstein’s assistant, the woman asked her about her family and their finances.

She told her how she grew up in a family who didn’t have much.

‘I was a little bitter, I felt cheated in life,’ she said, adding the woman – who she described as a brunette in her 20s, was easy to talk to.

‘I was kind of a lost kid and she sensed it,’ she said.

The woman then brought up Epstein, describing him as a ‘kind’ and ‘wealthy’ man who lived nearby. 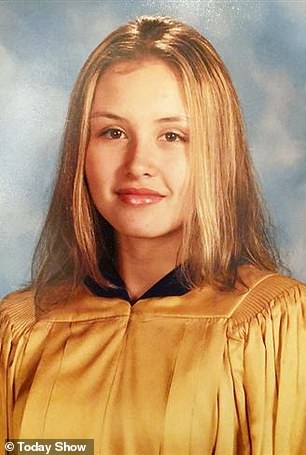 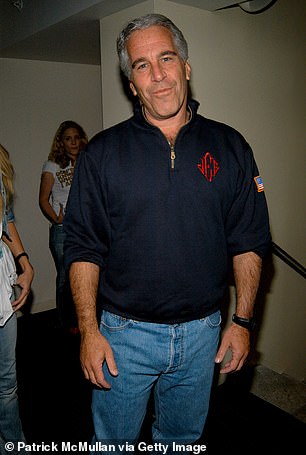 Araoz aged 14, when she says she was approached by Epstein’s staff outside her high school in New York City. She says he ‘forcefully raped’ her and ‘knew what he was doing’

‘He’s almost like a fatherly figure to her, which had meaning for me at that time because I was maybe longing for that,’ she said.

The woman showed up at her school several times she said and offered to buy her sodas on occasion.

‘She was definitely trying to get to know me,’ she said.

Araoz eventually agreed to go with her to Epstein’s opulent home which she said looked ‘like a museum’.

The first time she met him, she said he told her he had heard about her and felt bad about her father’s death. Despite being 14, she was given wine and cheese while she waited for him.

Epstein, she claims, insinuated that she was ‘very lucky to have met somebody like him’ because he said he could ‘really help’ her.

After their first meeting, she claims she left with $300 in cash. The assistant who had introduced them was given a digital camera, she said. 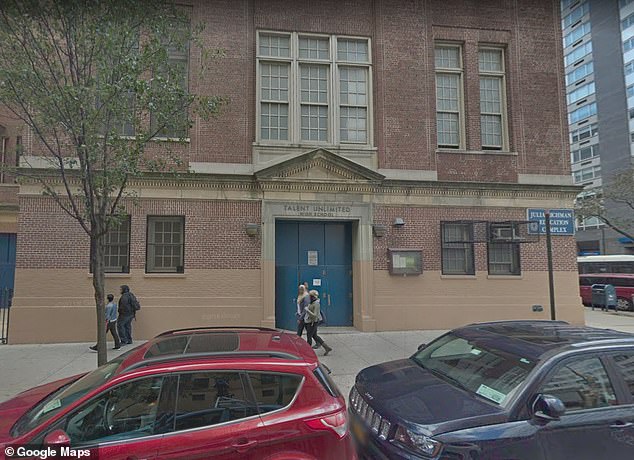 Araoz was a student at the Talent Unlimited High School on East 68th Street when she says she was approached by a brunette woman outside the building. After meeting the woman several times, she agreed to go with her to Epstein’s home, she claims 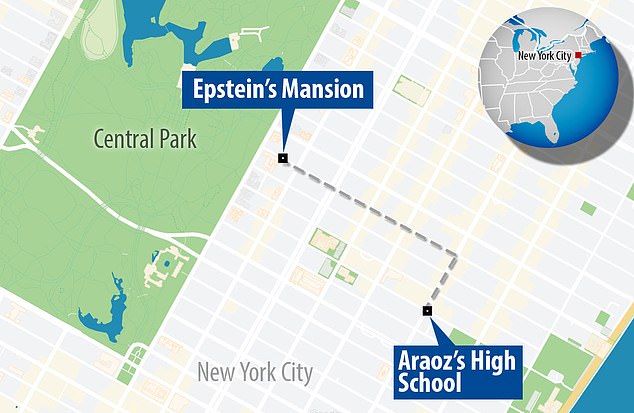 Araoz said she was  approached outside the school by a woman who mentioned Epstein, describing him as a ‘kind’ and ‘wealthy’ man who lived nearby. After the alleged rape, she said she dropped out of the school because she did not want to risk running into him or his staff 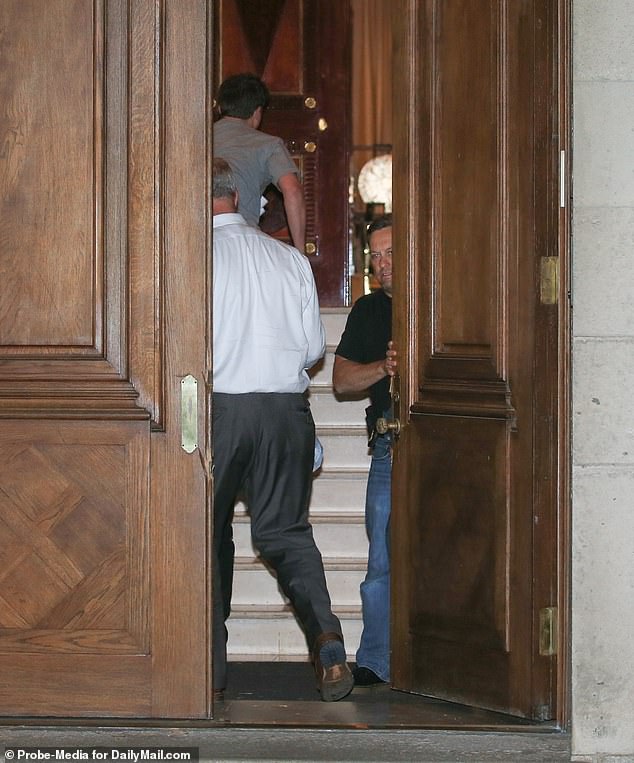 Agents are shown entering Epstein’s mansion on July 7 after his arrest. They say they found a trove of nude photographs inside, including some of young girls

Then, every time she returned, she was given the same wad of cash. At first, she said, it was an appealing arrangement because she had not been asked to do anything sexual.

‘There was nothing not to trust at that time. He was giving me $300, which was a big help for me,’ she said.

Among comments he allegedly made to her was that he would donate to AIDS charities and that she should become a model, something he would be able to facilitate because he owned an agency, she said.

After a month of supervised visits with the woman who had approached her outside her high school, she said she felt safe enough to meet with Epstein alone despite starting to feel ‘odd’ about their relationship. 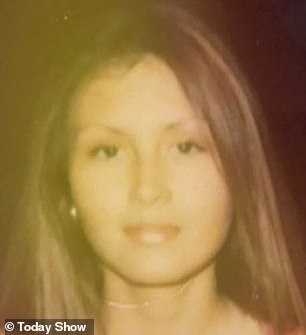 ‘I thought it was maybe a little odd because I didn’t know what he necessarily was getting out of it. But I said, “This is a genuinely really nice guy, (a) good man who wants to help me.”‘

The first time she went to the home alone, he took her downstairs in an elevator to a room he likened to the Oval Office – his ‘favorite room in the White House’, she said.

She walked past a room which contained a bathtub where there was a set of prosthetic breasts nearby, she said, and down hallways which were laden with murals and paintings.

They then walked into the massage room where there was a painting of a nude woman hanging on the wall.

Epstein told her, she claims, that she reminded him of the woman in the painting then asked if she was good at giving massages.

She agreed to give him one, she said, and stripped down to her underwear.

‘I felt almost obligated because of the money he was giving me. I didn’t know if he would get angry or if I didn’t listen what the repercussions would have been.

‘So I kind of just followed. I was so young, so I didn’t know better,’ she said.

At first, the massages went no further than her rubbing his back while in her underwear. 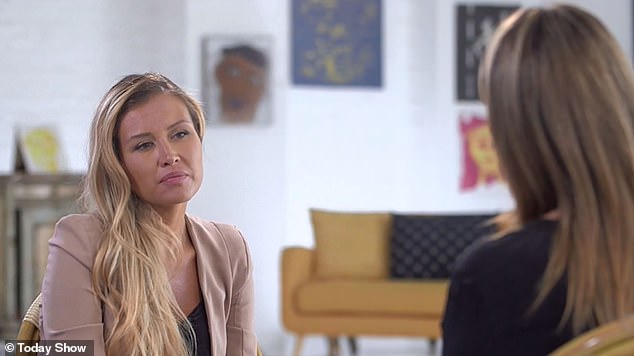 Araoz spoke out for the first time on Wednesday. Epstein is in custody awaiting a bail hearing on charges of sex trafficking and sexual assault against three unidentified victims between 2002 and 2005

Then, she said, he started ‘turning over’ and ‘playing with himself’.

‘He would also like when I would play with his nipples. He used to get turned on by that.

‘And then he would finish himself off and then that would be the end of it,’ she said.

For the next few months, she says she would be contacted by his ‘secretary’ to arrange massages.

They either called her at home or sent her a message on a beeper, she said. She would be taken to the massage room each time and would leave with $300 in cash.

‘It was just such a big help, the money. And I said, “I’m not really doing anything that wrong,”‘ she says she reasoned to herself.

During their meetings, he told her how he preferred women with smaller breasts – she claims – and promised her to jump start her career. 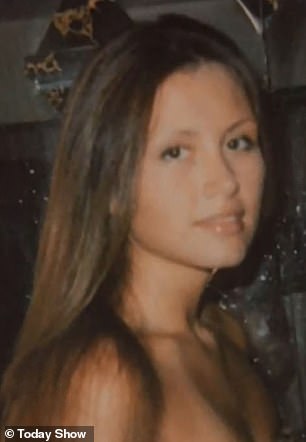 Araoz, shown as a teen, said she dropped out of school because she did not want to risk running into Epstein or his assistant

She insists that he knew how old she was because she had mentioned it in front of him and the woman who approached her but that he ‘didn’t care’.

In the fall of 2002, at the start of her sophomore year in high school, she had begun giving him the same type of massage she had given him before when he asked her: ‘Why don’t we try something a little bit different? Why don’t you do the massage on top of me?’

She said she was resistant and asked if they could ‘stick to the normal routine’ but claims he insisted on her removing her underwear for him to be able to touch her genitals.

Then, she said, he ‘brought’ her onto the table and raped her.

‘It was very aggressive, it was forceful. He was like, “It’s okay. You’re fine. You’re not doing anything wrong.”‘

She said he did not use a condom and carried on despite her pleading with him to stop.

After the alleged rape, she ran out of the house angry, she said.

She stopped going to school because she did not want to run into him or the woman who had recruited her a year earlier, and gave up on her dream of becoming an actress. 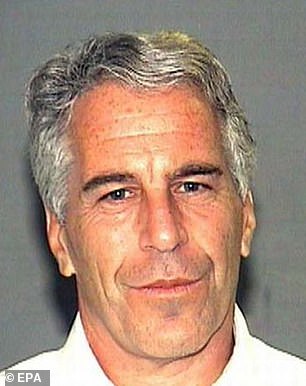 Epstein, shown in his July 8 mugshot, is in custody on charges of sex trafficking

Now, Araoz says she feels guilty for not speaking out.

‘I was so young that I was worried that somehow I would get in trouble. I was really frightened of Epstein. He knew a lot of powerful people and I didn’t know what he could do to me, and I wasn’t sure that anyone could protect me,’ she said.

‘What hurts me even more so is that if I wasn’t afraid to come forward sooner then maybe he wouldn’t have done it to other girls,’ she said.

The only people she told were a boyfriend, several years later, and her mother, both of whom confirmed to NBC that she told them at the time she had been raped by him.

Her mother says she also noticed a change in her appearance and behavior in 2002, around the time she says she was raped.

Two other friends said Araoz told them about it later.

‘He took something from me that can never be repaired, never made whole,’ she said of Epstein in her interview on Wednesday.