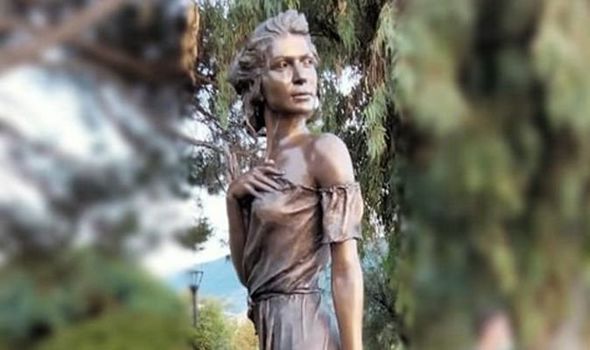 The bronze statue, unveiled near the seafront in the Italian town of Sapri, depicts a peasant woman wearing a long, sheer dress that clings to her body. The statue is sculptor Emanuele Stifano’s tribute to 19th century poem, La Spigolatrice di Sapri (The Gleaner of Sapri), written in 1857.

The sculpture was unveiled on Saturday and photos show an entourage of men, including former prime minister Giuseppe Conte, surrounding the statue.

Now, several politicians have slated Stifano’s work saying it is an “offence to women” and an example of “male chauvinism”.

Laura Boldrini, a Democratic politician, said on Twitter: “The newly inaugurated statue in Sapri and dedicated to Spigolatrice is an offence to women and to the history it should celebrate.

“But how can even institutions accept the representation of women as a sexualised body? Male chauvinism is one of the evils of Italy.”

Monica Cirinnà, senator of the Democratic Party, criticised the statue saying the woman’s depiction was a “slap in the face to history and to women who are still only sexualised bodies.

“This statue of the Gleaner says nothing of the self-determination of a woman who chose not to go to work to take sides against the oppressor.”

Another group of female politicians from the Democratic Party called for the statue to be knocked down. They said: “Once again, we have to suffer the humiliation of seeing ourselves represented in the form of a sexualised body, devoid of soul and without any connection with the social and political issues of the story.”

Emanuele Stifano defended his sculpture saying that if it were up to him, the woman would have been “completely naked…simply because I love the human body”.

In a statement he said: “I am shocked and displeased by what I am reading. When I make a sculpture, I always tend to cover the human body as little as possible, regardless of gender.

“Since it was placed on the seafront, I took advantage of the sea breeze that invests it to move the long skirt, and so highlight the body…to represent an ideal of a woman, evoke her pride, the awakening of a consciousness, all in a moment of great pathos.”