NSW reported no new local coronavirus cases in the 24 hours to 8pm on Sunday, as genome sequencing linked mystery cases in Sydney's west.

A mystery group of seven cases – a man and six of his contacts – identified in western Sydney at the weekend have been genomically linked to the region's Berala cluster. However, it is not known how the initial case caught the virus. 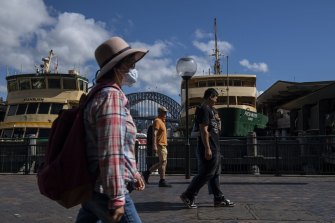 Sydney has recorded a day with no new local coronavirus cases.Credit:Louise Kennerley

NSW Health's Dr Jeremy McAnulty said "investigations and contact tracing [were] under way to establish the route of acquisition".

NSW reported two consecutive days without local cases last week, before the mystery infection was detected on Saturday. His close contacts' infections were reported on Sunday.

The numbers come as Victoria announced it would be reopening to most of Greater Sydney, allowing thousands stranded over Christmas to return to their home state.

Twenty-five Greater Sydney local government areas will move from "red" to "orange" at 6pm under Victoria's traffic light travel permit system, meaning people will be able to travel to Victoria provided they have a coronavirus test within 72 hours of arrival and self-isolate until they receive their result.

People who have been in the Blacktown, Canada Bay, Burwood, Canterbury-Bankstown, Cumberland, Inner West, Liverpool, Fairfield, Parramatta and/or Strathfield local government areas within 14 days of their arrival in Victoria are still not eligible to return.

Queensland requires declared hotspots to record 28 consecutive days without any unlinked cases before it will remove quarantine requirements for travellers.

Only 8773 tests were reported in NSW to 8pm on Sunday, compared with 12,764 in the previous reporting period.

Government and health authorities have said they want the state to record 25,000 to 30,000 daily tests to give them confidence to ease coronavirus restrictions in Greater Sydney.

"High testing rates are critical to our efforts to identify COVID-19 cases and to prevent it from spreading," NSW Health said in a statement.

"This is particularly important in areas where recent cases have attended, including Auburn, Berala, and surrounding suburbs, as well as across western and south-west Sydney."

Eight cases were recorded in returned overseas travellers in hotel quarantine during the reporting period, bringing the total number of cases in NSW since the start of the pandemic to 4885.

Earlier on Monday morning, NSW Premier Gladys Berejiklian repeated that she was considering an “incentive system” to encourage people to get the COVID-19 vaccine when it becomes available in Australia.

"For my part I’ll be rushing to the queue as soon as I’m told I can have it," she told 2GB.

"The more people that are vaccinated, the greater the likelihood that we can have a return to normality as we know it."

Ms Berejiklian said airlines had already indicated people might not be able to travel if they have not been vaccinated and that other businesses would also be able to implement their own rules.

"All workplaces and state governments will have a role in encouraging people to take [the vaccination]," she said.

"I don’t ever like to force anybody to do anything but there should be incentives in place for people to do certain things if it’s for their own safety and the safety of others and their conversations that will be had."

She also said Australia has "the strictest regulations on the planet when it comes to approving a vaccine".

"Please know nothing would get approved unless it was safe."

with David Estcourt and Lydia Lynch

Get our Coronavirus Update newsletter for the day’s crucial developments and the numbers you need to know. Sign up to The Sydney Morning Herald’s newsletter here and The Age’s here.

END_OF_DOCUMENT_TOKEN_TO_BE_REPLACED

The Daily Star’s FREE newsletter is spectacular! Sign up today for the best stories straight to your inbox A mobster boss who headed one of the most "vicious" gangs in New York has died behind bars. Gambino family boss Peter Gotti died aged 81 in jail, his lawyer confirmed. Peter