A favourite joke among the Perth media currently is that there are nearly more active Clive Palmer legal cases than COVID-19 cases in Western Australia. 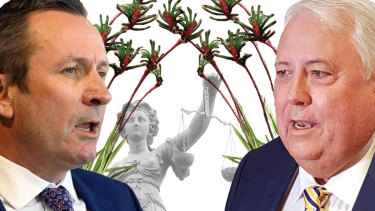 This barrage of cases in the past week could cost tens of millions of dollars to defend and prompted WA Premier Mark McGowan to instruct the state’s lawyers to have the mining magnate declared a ‘vexatious litigant’, which could see everything thrown out.

So what is a vexatious litigant and does the state have any prospect of having Mr Palmer, a man who once declared litigation as his 'hobby', ruled to be one?

From the outset, the WA’s prospects are complicated because of the number of jurisdictions Mr Palmer's cases are filed in.

On Wednesday, WA Attorney-General John Quigley told ABC Perth it would be a “very big step” to get someone across the line as 'vexatious' and, in Mr Palmer’s case, several courts would have to come to the conclusion together.

“So much of his litigation is sprinkled around the country that there would have to be lots of jurisdictions coming to that opinion,” Mr Quigley said.

WA’s own laws define vexatious proceedings as those that are an abuse of the process of courts, instituted to harass or annoy and/or have no reasonable grounds.

Melbourne Law School Professor Katy Barnett said any action taken would need to find that Mr Palmer was misusing legal actions to further an ulterior or improper purpose, that he was unreasonable or intended to harass, delay or cause detriment to the WA government.

“Courts tend to look at how many proceedings a person has started, whether their actions were reasonable in the circumstances, and whether they are just trying to reopen an old matter which has already been decided,” she said.

Professor Barnett said courts were generally reluctant to declare people vexatious litigants because it curtailed their access to the justice system.

In the High Court’s history, just four people have been declared a vexatious litigant. The last one was WA man Jerrod Conomy in 2019, after he made 24 applications to appeal a stalking conviction.

Perth lawyer John Hammond said the WA government had no prospect of success.

“It is not based just on the number of lawsuits but whether the lawsuits have merit, it is based on whether it is always the same defendant or respondent and in terms of the way the law looks at it, he doesn’t fit the criteria,” he said.

“I say that with some regret. I fully understand the government’s frustration.”

Mr Hammond said the worst part about the bombardment of cases was the resources they would chew up, "which the average person can’t afford".

After announcing his contempt of court proceedings against Mr McGowan and Mr Quigley on Wednesday, Mr Palmer said he was reluctant to take the action, but claimed he had to.

"I must respect the institution of the courts, being the only institution in this country which stands between chaos and good order and that protects and defends the Australian Constitution and the welfare of all Australians," he said.

"All Australians must be free to have access to our courts. Free from intimidation, fear or threats. Free from vitriolic abuse and violent rhetoric. Free from injury and damage should they seek to rely on the rule of law."

END_OF_DOCUMENT_TOKEN_TO_BE_REPLACED

END_OF_DOCUMENT_TOKEN_TO_BE_REPLACED
Recent Posts
We and our partners use cookies on this site to improve our service, perform analytics, personalize advertising, measure advertising performance, and remember website preferences.Ok