North Korea and Russia to join forces on ‘fake news’ 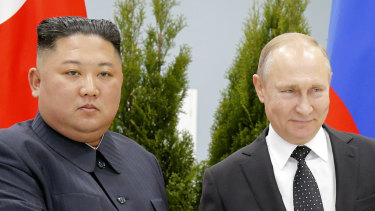 Korean Central News Agency (KCNA) and Tass news agency directors signed a cooperation agreement during a visit to Pyongyang by a Russian delegation including the head of Russia's Channel One state television.

"We increasingly often see misrepresentation of information in the news environment, and we must counter the dissemination of such fake news," said Kim Chan Gwang, the KCNA director general. "I believe that KCNA and Tass news agencies must join efforts towards this goal."

While he did not specify what "fake news" he meant, the head of North Korea's foreign ministry information department praised Tass and Channel One for "fairly and objectively" reporting the "principal positions of the leadership of the People's Republic in Korean-American relations".

Talks between the US and North Korea collapsed in Sweden on Saturday.

The KCNA propaganda-heavy coverage suggests that almost any statement that differs from the Pyongyang line would be considered fake news. An article yesterday about Korean War commemorations south of the border said that "the South Korean authorities' rhetoric about reconciliation and peace only prove that they are false trumpeting to cover up their dark intention of escalating confrontation".

Russian state media often accuse the West of hypocrisy and hostile plots. After the downing of Malaysia Airlines flight MH17 by a Russian missile in Ukraine in 2014, – which killed 27 Australians – state media deflected blame with a raft of conspiracy theories, and portrayed the Salisbury poisoning accusations as groundless "provocation".

Only Turkmenistan ranked lower than North Korea in the Reporters Without Borders 2019 press freedom index, while Russia came in at 149.

Tass said yesterday it hoped to expand its bureau in the country to include a photography desk.

Russia's President Vladimir Putin hosted North Korean leader Kim Jong-un in Vladivostok in April. Keen to be seen as a power broker in the region, Moscow has demanded that the US provide security guarantees in exchange for Pyongyang ramping down its nuclear missile programme.

END_OF_DOCUMENT_TOKEN_TO_BE_REPLACED

END_OF_DOCUMENT_TOKEN_TO_BE_REPLACED
Recent Posts
We and our partners use cookies on this site to improve our service, perform analytics, personalize advertising, measure advertising performance, and remember website preferences.Ok