One of Romania’s richest men, his wife and son, 30, are killed in Milan air crash: Billionaire was at controls of private plane  when it smashed into empty suburban office block killing eight including a young boy 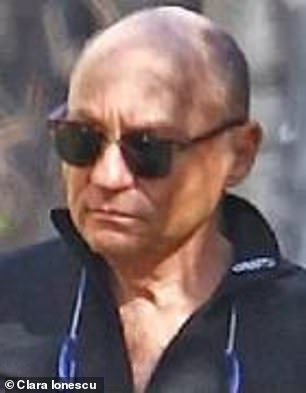 A property developer considered to be ‘one of the richest men in Romania’ has been named as one of the victims of a plane crash in Milan today.

A small, single-engine plane carrying six passengers and a crew of two crashed into a vacant two-story office building in the suburb of San Donato Milanese on Sunday afternoon, killing everyone on board including a boy.

By early evening, only two of the eight dead had been identified, since they carried documents on them, authorities said.

Those aboard were ‘all foreigners,’ Milan Prosecutor Tiziana Siciliano told reporters at the scene, including the pilot, who was Romanian.  The aircraft was registered in Romania, she added.

Italy’s RaiNews reported that one of the victims was Dan Petrescu, a major real estate developer, who the outlet described as being ‘considered one of the richest men in Romania.’

Petrescu was 68 years old and had dual Romanian and German citizenship, the outlet reported, adding that he was piloting the plane at the time of the crash.

Corriere della Serra reported that the family was heading to their villa in Olbia, Sardinia, where Petrescu’s 98-year-old mother was waiting for them. 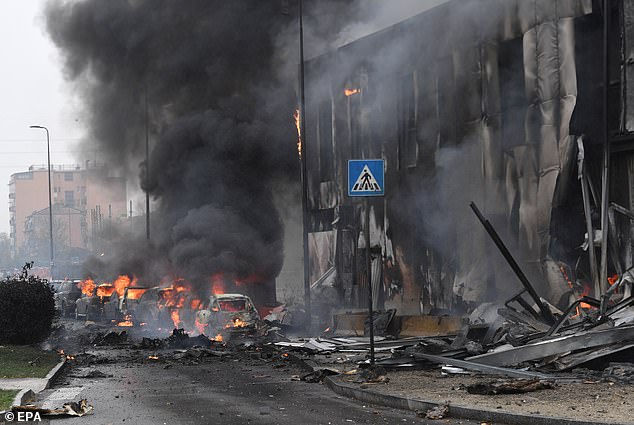 A small plane has crashed killing eight people, including six passengers and two crew members, in Milan, Italy. Pictured: Firefighters work at the building on which a small private plane crashed into the San Donato Milanese district in Milan 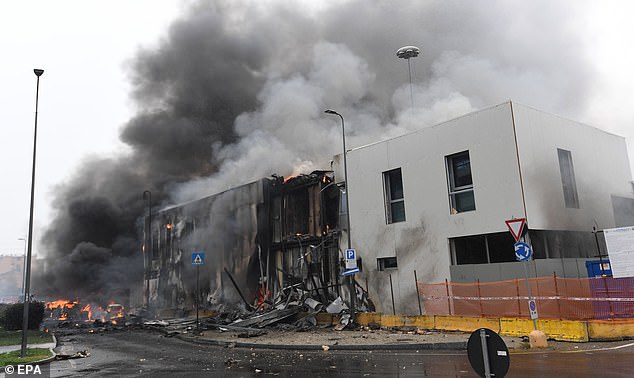 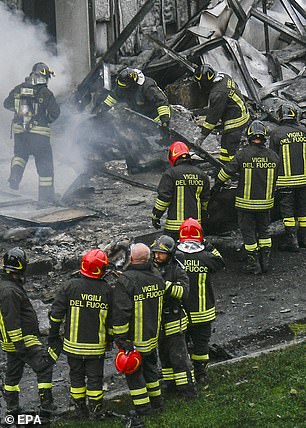 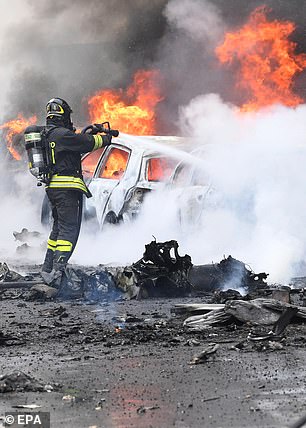 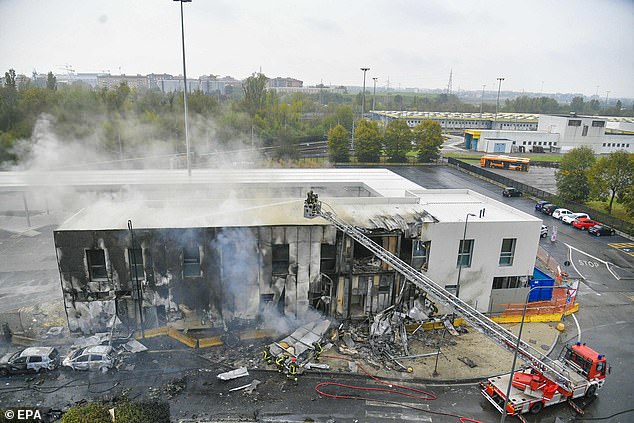 Corriere, citing Romanian media, reported that Petrescu’s son worked as a researcher in Canada and had arrived in Italy to attend the baptism of his friends’ child.

The newspaper said Petrescu bought the plane in 2015 together with Vova Cohn, a former shareholder of the Dinamo Bucharest football club.

Investigators have opened a probe into what caused the private plane to crash just 11 minutes after takeoff from Milan’s Linate Airport en route to Olbia Airport on the island of Sardinia.

A thick column of dark smoke rose from the crash site and was visible for kilometres. Several unoccupied cars parked nearby went up in flames.

Firefighters tweeted that no one else but those on board was involved in the early afternoon crash near a subway station in San Donato Milanese, a small town near Milan.

The building was undergoing renovations but, as it was Sunday, no workers were on site at the time of the crash.

Siciliano said the plane was proceeding on its flight until ‘a certain point, then an anomaly appeared on the radar screen and it plunged,’ striking the building’s roof.

Control tower officials reported the anomaly, she said, but further details were not immediately given. 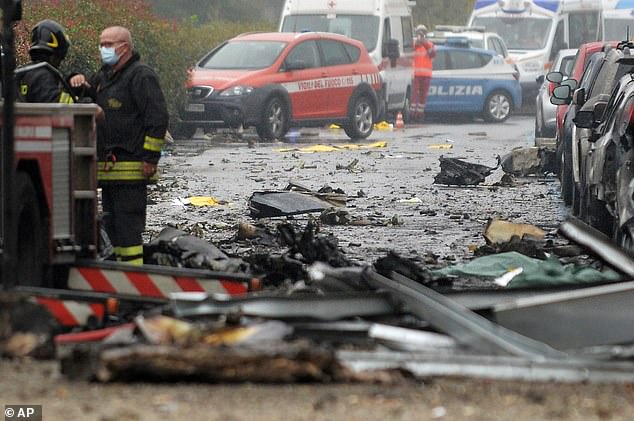 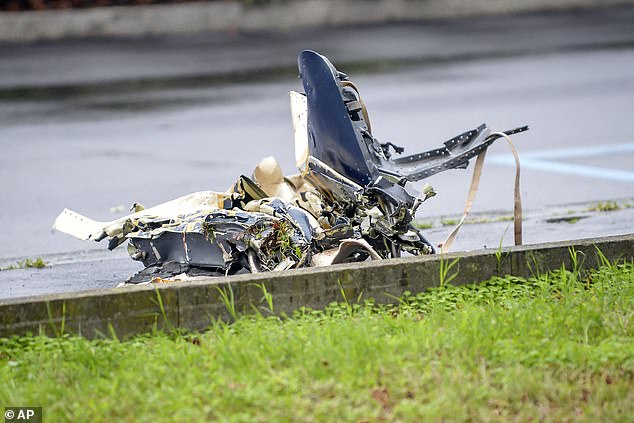 Metallic pieces lie near the crash site where the plane came down in San Donato in Milan, northern Italy, earlier today 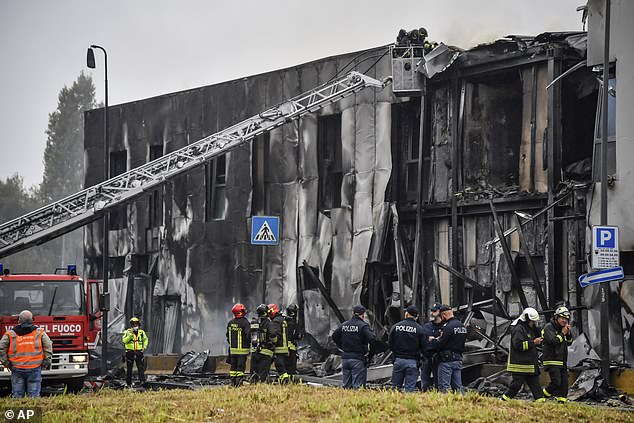 Pictured: Firefighters work on the site of a plane crash, in San Donato Milanese suburb of Milan, Italy, on Sunday afternoon 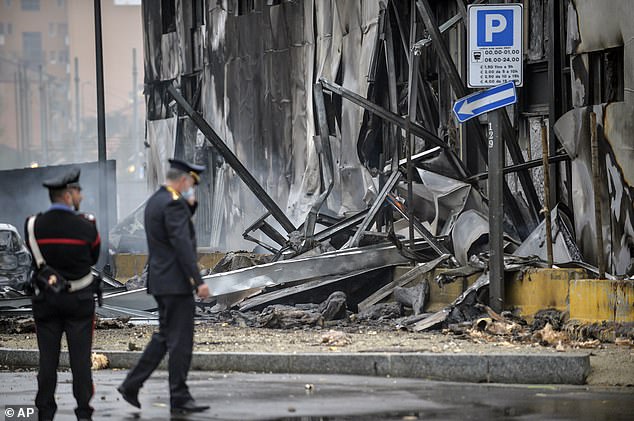 Pictured: Carabinieri officers stand on the site of a plane crash, in San Donato Milanese suburb of Milan earlier this afternoon

The prosecutor said the plane did not send out any alarm signal. It was too early to cite any possible cause for the crash, Siciliano said, adding that the flight recorder has been retrieved.

The reports said the aircraft had flown from Bucharest, Romania, to Milan on September 30 with no apparent problem.

Witnesses told local media that they heard an unusual noise, like a whistle, followed by a loud bang, then saw a fireball when they looked out of the window.

The Italian news agency ANSA quoted the national air safety agency ANSV as saying ‘the plane hit the building and started burning.’ It said the aircraft was a PC-12, a single-engine, executive-type plane.

Fire officials said earlier that the aircraft had crashed into the building’s facade. But following further inspection, the prosecutor said it was apparent that the plane had struck the roof.

Firefighters extinguished the flames at the badly charred and gutted building, which reportedly was under renovation. 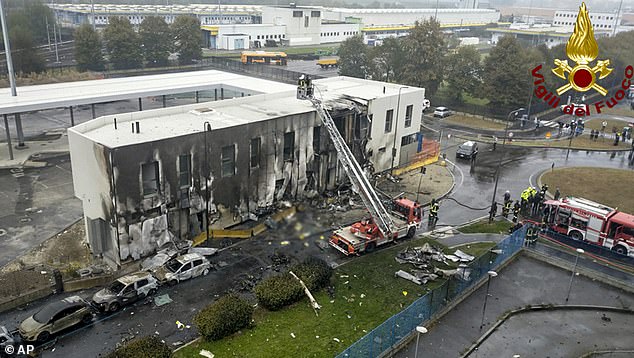 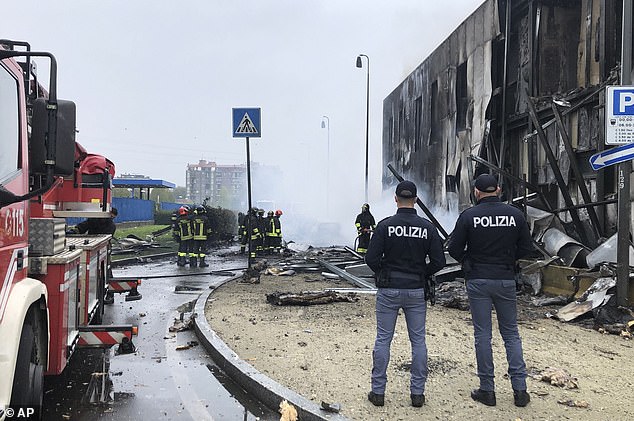 Pictured: Italian police stand by as firefighters work at the site of a plane crash, in San Donato Milanese suburb of Milan, Italy 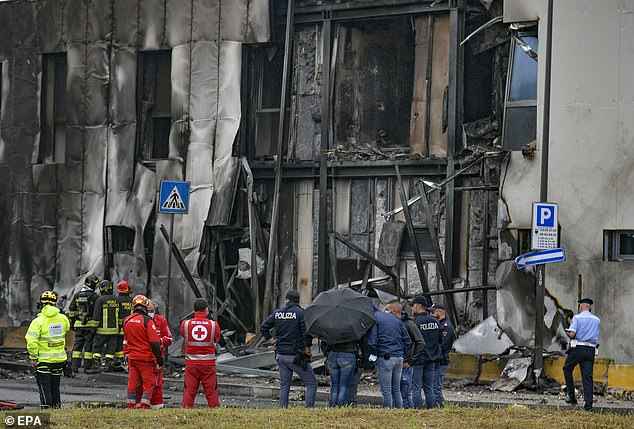 It is thought the plane was heading from Milan’s Linate airport and the Italian island of Sardinia. Pictured: the scene today 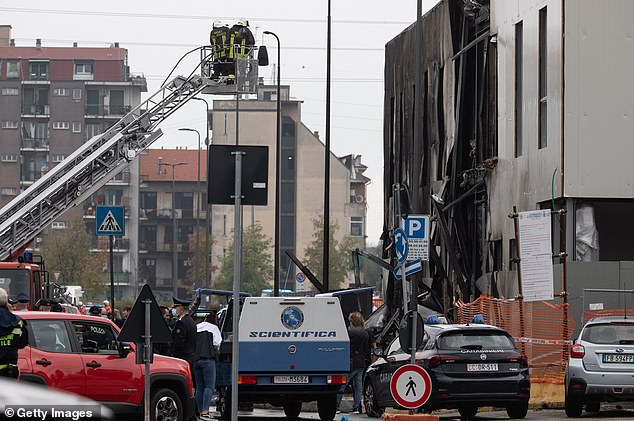 Firefighters and police forces stand next to the impact point of the plane, which took off from the nearby Milan Linate airport 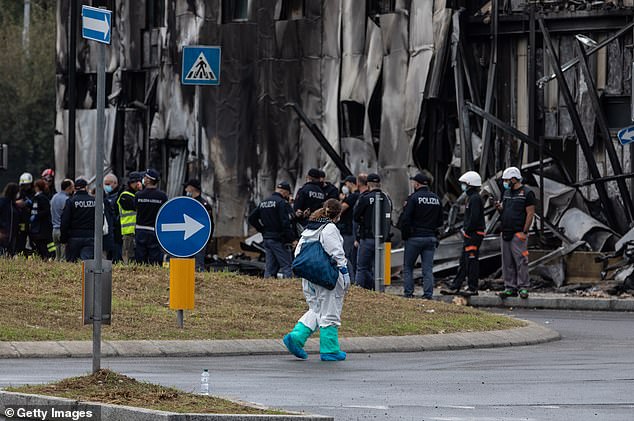