The owner of Britain’s ‘most hit home’ want to ban heavy lorries from his village after his 16th Century cottage was struck for the eight time in just a year.

Heartbroken Mark Kilbey, 57, says he lives in constant fear of trucks smashing into his grade II listed home as they take a sharp turn where his property sits.

The latest collision happened just three hours after workmen had finished repairing damage from the previous strike on the hardy cottage.

Mr Kilbey, a former detective who lives with his partner in the house in Wingham, Kent, said: ‘The builders finished at 5pm and the house was struck again at 8.30pm. It’s a new record. 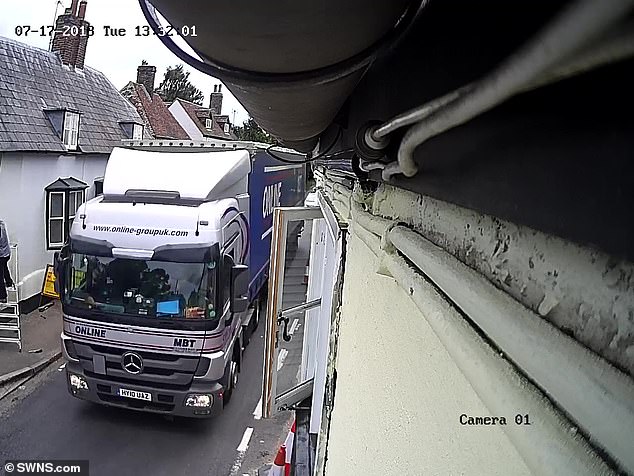 The owner of Britain’s ‘most hit home’ want to ban heavy lorries from his village after his 16th Century cottage in Wingham, Kent was struck for the eight time in just a year 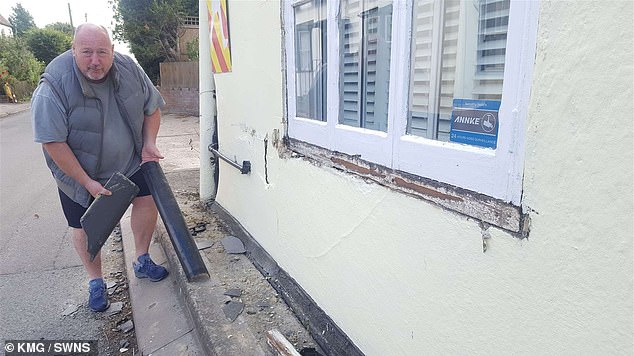 Heartbroken Mark Kilbey, 57, says he lives in constant fear of trucks smashing into his grade II listed home as they take a sharp turn where his property sits

‘I jokingly told the builders to leave the ladders at the side of the house because they’d be back in a few weeks. It turns out it was only a few hours. It took the biscuit.’

He added: ‘I bought the house in 2015 knowing it had been hit before, but I had no idea it would become this bad. I reckon it’s been hit at least 20 times.’

Insurance companies representing the lorry companies have forked out around £60,000 in house repair costs in five years, according to the former Metropolitan Police investigator.

Mr Kilbey says the only way to prevent future incidents is to force the biggest lorries to take alternative routes.

The besieged homeowner said: ‘I’m not querying the job that lorry drivers have to do, they are following their Sat Nav.

‘What I am saying is they don’t need to be turning in a road they don’t fit in. There are other routes they could use.’

He added: ‘My home has been dubbed the most-hit house in the country and I challenge anyone to find one which has suffered like mine. I expected to be living in a rural village, not an industrial park.’*

Mr Kilbey has fixed large red and yellow hazard signs to the property, despite its heritage classification. 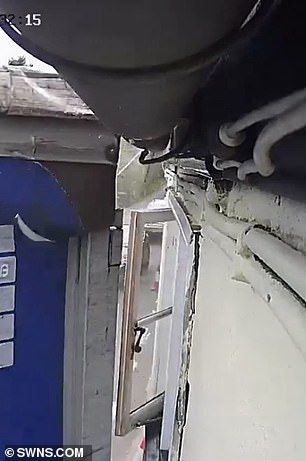 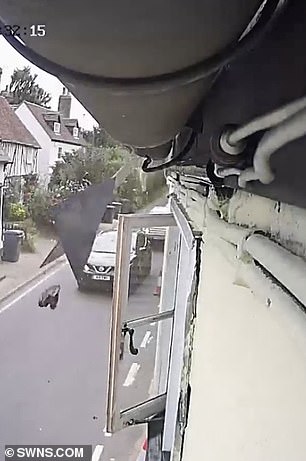 He said: ‘I’ve got nowhere with them. They just say they are monitoring the situation, but I think they just consider my property is expendable.

‘If it happened once, you would say that it was an incompetent driver, but if it happens 20 times and no action is taken you just think people don’t care.

‘The bottom line is that I don’t really matter in the eyes of those who are responsible for my safety. They are completely negligent.’

Mr Kilbey, who lives in the cottage with his partner Sally Passmore, predicts a child or elderly person will likely be killed by lorries if they are not banned from the lane. 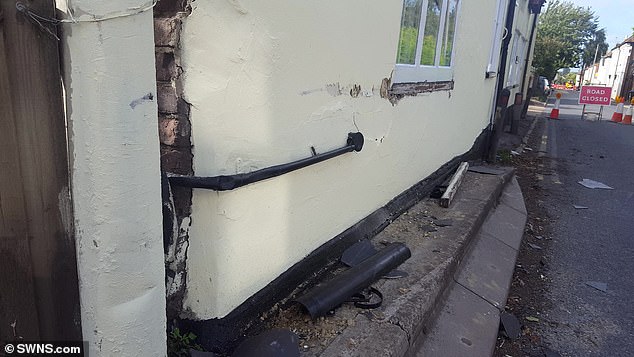 Insurance companies representing the lorry companies have forked out around £60,000 in house repair costs in five years for the property, and Mr Kilbey says drivers are ‘completely negligent’

The stricken resident said: ‘There’s a primary school behind my house. These lorries have to go up the pavement when they turn. It’s a horrible thought, but an elderly person or a child is going to be injured one of these days. It’s definitely going to happen.

‘But frankly I don’t even think that will prompt them to take action, because they fundamentally don’t care.’

Police are prosecuting the latest lorry driver to smash into the home, in addition to handing him three points and a £100-on-the spot fine on Monday.

The plagued property is sited opposite the entrance to a country road where most of the incidents occur when the bigger lorries are forced to mount the pavement as they turn right. 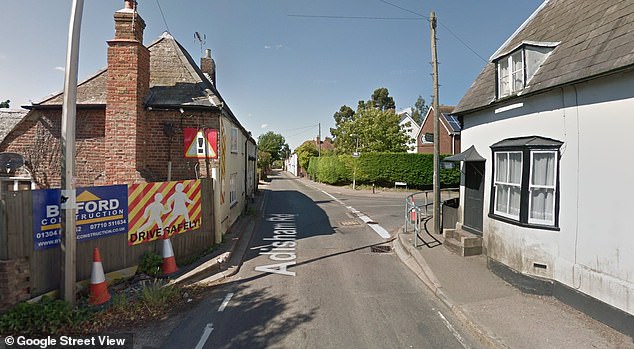 Mr Kilbey has fixed large red and yellow hazard signs to the property, despite its heritage classification 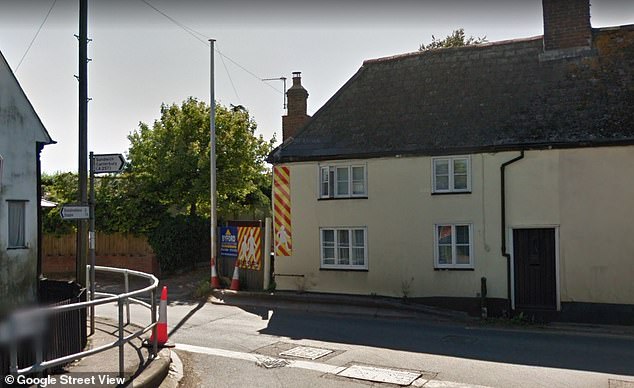 CCTV cameras are now fixed onto the side of the cottage to provide evidence to the lorry drivers’ insurance companies, who foot the £3,000-a-time fee is costs to fix damage to the property.

Footage from a previous collision in 2018 shows the rear of a large lorry as it turned, swung and whacked the building’s guttering, sending debris crashing onto the road.

Mr Kilbey said: ‘It’s not the property’s fault it’s in the wrong place now. It was in the right place in its heyday. But now life’s moved on and the 21st-century doesn’t suit where this house is.’

The former policeman, who lived in London for 40 years, moved to the rural village for a quiet lifestyle.

Mr Kilbey, who is now the director of mental health charity Take-Off, knew of the property’s tricky location before he bought it, but says he underestimated the problem

He added: ‘I didn’t know the severity of the problem when I bought it and traffic has gotten heavier in the last few years. If the council were genuinely monitoring the issue, they would know that – and act.’

A Kent County Council spokesman said: ‘We very much sympathise with Mr Kilbey but unfortunately this is difficult for KCC to resolve as a highways authority.

‘In 2018, KCC looked to identify the destinations of the offending vehicles and the HGVs involved were not just driving through the village, these are vehicles making legitimate deliveries to or collections from local businesses.

‘Whilst the majority of HGVs using this junction do so without incident, we acknowledge that the errant few are misjudging the turning and causing damage to property and distress to residents.

‘There is no possibility of altering the road layout and we have discussed with businesses about re-routing their vehicles where possible.

‘The businesses all use an informal one-way system where they enter Staple Road from the B2046 and leave via two other country lanes.’

END_OF_DOCUMENT_TOKEN_TO_BE_REPLACED

END_OF_DOCUMENT_TOKEN_TO_BE_REPLACED
Recent Posts
We and our partners use cookies on this site to improve our service, perform analytics, personalize advertising, measure advertising performance, and remember website preferences.Ok