Bereaved penguin parents embark on killer rampage: Pair of birds kill two adults and two chicks at German zoo after their own egg failed to hatch and is taken away by staff

A pair of penguins have embarked on a rampage at a German zoo, killing parents and chicks after zookeepers took their own rotten egg away.

The drama, which according to zookeepers is without precedent, took place at Dresden zoo in the capital of the eastern German state of Saxony on May 21.

Staff were at first delighted to learn that three Penguin couples were sitting on eggs, with the promise of baby penguins in the near future.

Two of the Humboldt penguin couples successfully hatched two eggs each, and began to raise the four chicks. 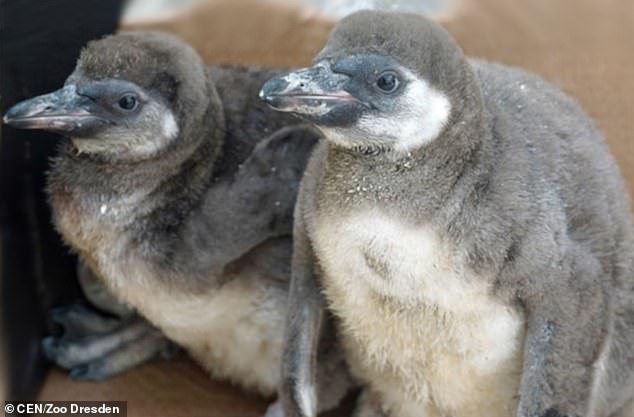 When staff at Dresden zoo removed a penguin’s couple’s egg that had not fertilized, the furious pair attacked the other penguins in the enclosure, killing two adults and two chicks (pictured: the chicks who were killed)

But the egg belonging to the third pair never hatched, and when it became clear that the egg had gone off, both the nest and the egg were removed.

But the decision infuriated the would-be parents, and when the keepers had left, they attacked another pair who had successfully hatched two chicks, driving them away from their nest and killing the two baby penguins.

Both the chicks had been until that point developing well, with one weighing 300 grams and the other weighing 500 grams.

Just four days later the two penguins struck again; this time attacking the other parents of the two remaining chicks. 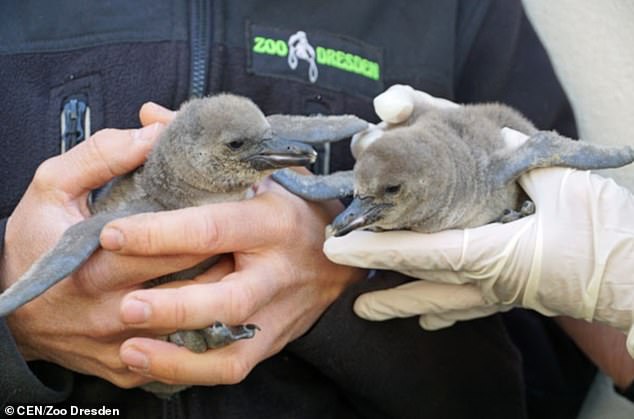 The zoo did not comment on why they had decided to leave the killer penguins with the remaining parents.

This time the two penguin parents, both older birds, tried to defend the young, and died apparently from shock at the brutal attack by fellow penguins.

Their sacrifice however kept the killer penguins away from the young long enough for keepers to intervene, and both babies, which are now orphans, have been rescued.

But the tragedy means they will now have to be raised by hand. Currently weighing just over a kilogramme each, they are expected to survive and are already eating fish. 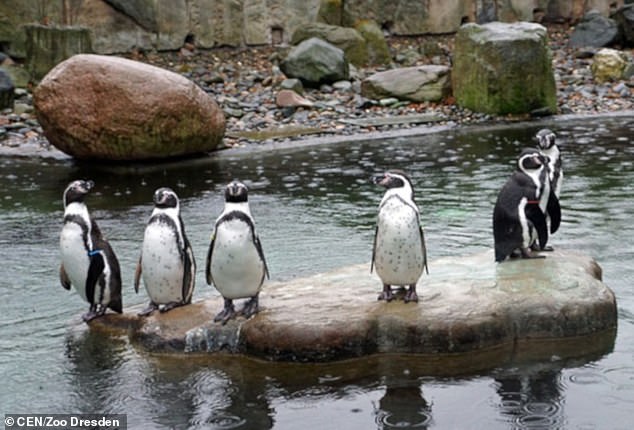 The penguin enclosure at the Dresden Zoo, where staff are said to be shocked by the killing of the other penguins in the colony by the infertile pair

Zoo boss Karl Heinz Ukena defended the decision to remove the egg from the killer penguins at the time, saying: ‘The fertilisation of the egg had not worked.

‘Only a long time after the egg should have hatched did we finally decide to move it, because it had clearly gone off and posed a health risk for the penguins.’

He added that the killing of the other penguins in the colony by the infertile pair had come as a complete shock.

He said: ‘Staff who have had decades of experience in dealing with penguins are absolutely shocked because they have never heard of anything like this taking place. 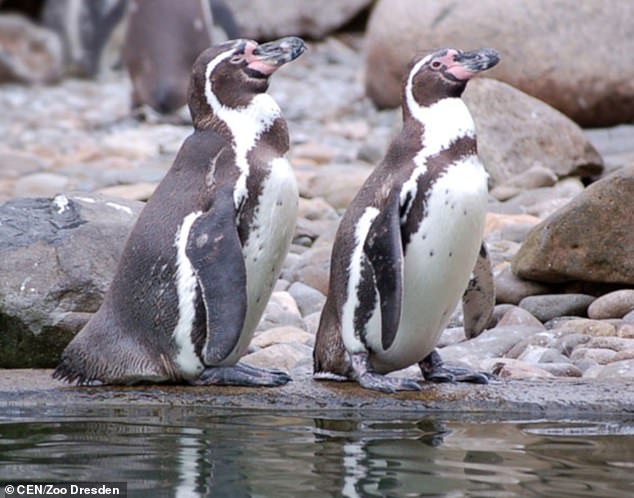 Zoo staff have decided not to segregate the pair of killer penguins that murdered fellow penguins in a rage when zoo staff took away their rotten egg (pictured: Penguins in their enclosure at Dresden Zoo)

‘In addition, in the wild there is nothing recorded that indicate penguins behave in this manner.’

The zoo added that in future, eggs that fail to hatch would not be confiscated but instead would either be left for longer or replaced with an artificial egg of the same size and colour.

The loss is a double tragedy because Humboldt penguins are a threatened species which is listed as vulnerable on the International Union for Conservation of Nature (IUCN) Red List.

Due to loss of habitat and climate change, only around 32,000 adults remain in the world.