Boozy blowouts with the Rolling Stones, countless lovers smuggled into bed, and chaos in every corner. If ever a building deserved a blue plaque for partying, it’s Peter Cook’s House of Historic Hedonism

So is the passport and driving licence, once Blu-tacked to the sitting room wall for ease of access by the late, great satirist Peter Cook. (‘Greatest invention of the 20th century, Blu-tack’, he was fond of saying.)

And the bowls of sunglasses, vast hat collections and graffiti seem unimaginable.

The word ‘oxymoron’ — which Cook would often forget — was scrawled across one wall. In the narrow hallway there was a reddish-brown blotch of a squashed insect circled and captioned ‘fly’. 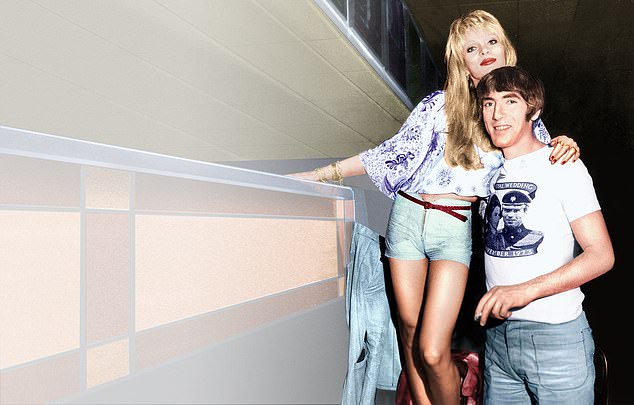 Today, this sprawling three-storey home, halfway down a mews of 18th-century coach houses, is a vision of pristine delight.

The North London property has just gone on the market for £5 million — and is next week set to be adorned with a blue plaque to honour Cook’s tenure.

But when Peter Cook lived here — from 1974 until his death from a gastrointestinal haemorrhage in 1995, aged 57 — this gothic folly saw enough louche activities to turn any prospective buyer’s ears pink.

Everyone who was anyone seems to have partied at Perrin’s Walk — the Pythons; Stephen Fry, David Gower, Dave Stewart, the Rolling Stones. And Cook’s diminutive comedy partner, Dudley Moore.

The pair would pace round the garden writing sketches, trying out jokes and, increasingly, rubbing each other up the wrong way as Moore sought Hollywood success while Cook embraced a quiet life with triple vodka and orange for breakfast.

It was at a Perrin’s Walk party that a dripping wet Cook greeted his guests by explaining he had just jumped into the koi carp pond after setting his trousers on fire while lighting candles. 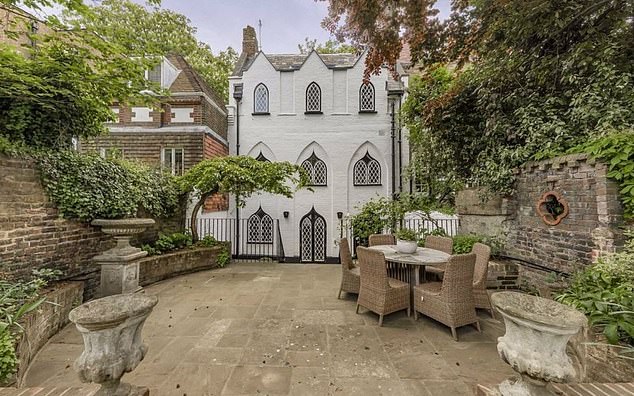 Perrins Walk is a charming private mews and is perfectly located for the Hampstead Village lifestyle, according to a recent listing 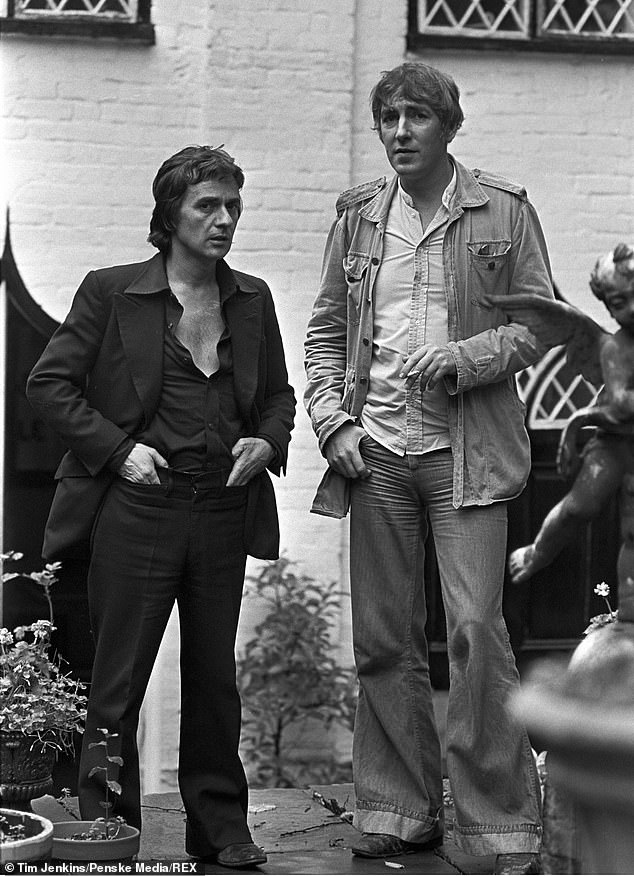 Cook’s daughters Daisy and Lucy, from his first wife Wendy, occasionally lent a hand. ‘I remember asking Keith Richards what he’d like to drink. ‘Whisky!’ he commanded,’ Daisy said. ‘As I returned with a glass, he looked at me blankly and said: ‘I meant a bottle.’

When an admiring Ronnie Wood asked his host who the waitress was, Cook sharply responded: ‘That’s my daughter — hands off!’

Cook himself welcomed a steady stream of women. Indeed, it was here, hidden in a suitcase upstairs in the master bedroom, that second wife Judy Huxtable spied on her husband, trying to catch him in flagrante.

If she’d been pushed to the edge, it was no surprise. For Cook had a voracious appetite for women and was not the sort to let a little detail like wives — three of them, to be precise — get in the way of a bit of extracurricular fun. 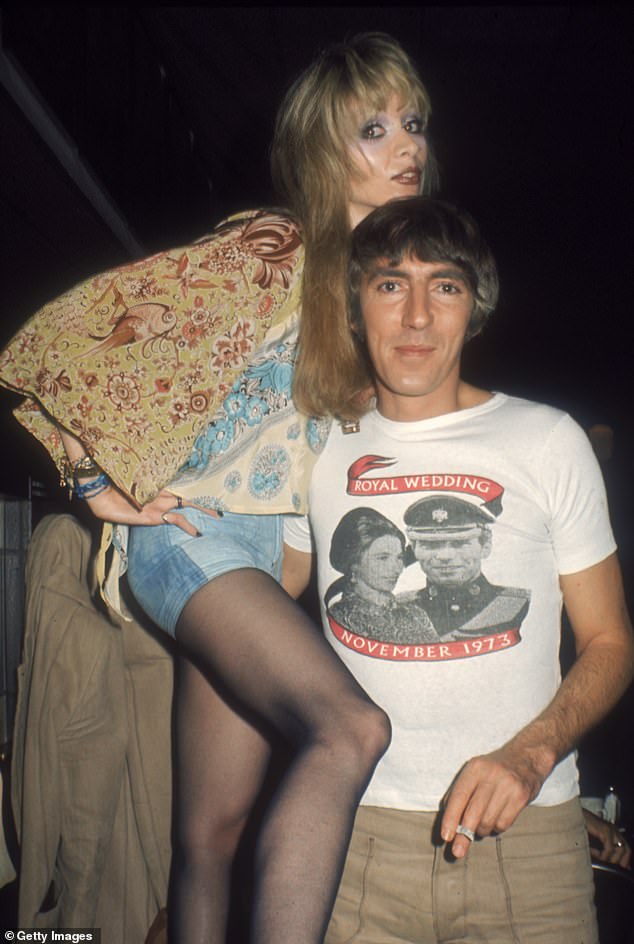 Peter Cook and his wife Judy Huxtable. Cooked lived in the party house from 1974 until his death from a gastrointestinal haemorrhage in 1995, aged 57 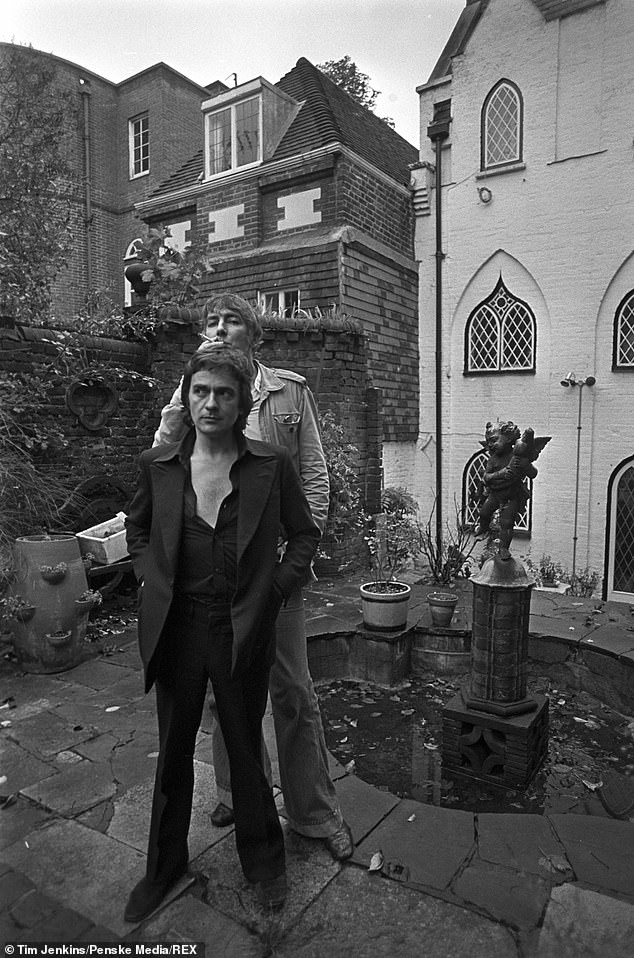 Everyone who was anyone seems to have partied at Perrin’s Walk — the Pythons; Stephen Fry, David Gower, Dave Stewart, the Rolling Stones. And Cook’s diminutive comedy partner, Dudley Moore (pictured together)

Over the years, he bedded a vast array of beauties including President J.F. Kennedy’s wife, Jackie, and her sister, Lee Radziwill.

When famous women such as Germaine Greer visited, he would flirt furiously. He also whisked Hollywood actress Raquel Welch and Bond Girl Ursula Andress out for the evening, leaving poor old Judy shell-shocked, at home.

Peter Cook, the son of an economics adviser to the government, was brilliant, funny and original.

He was at Cambridge at the same time as future Tory grandees Michael Howard, Leon Brittan and Kenneth Clarke and knew them all vaguely. 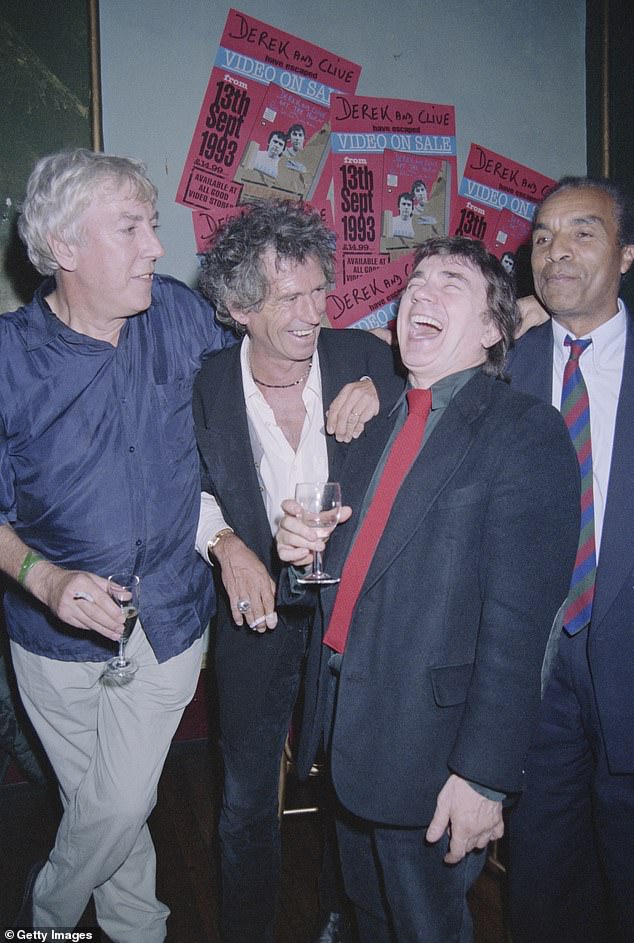 British comedians Peter Cook (1937 – 1995) and Dudley Moore (1935 – 2002) with guitarist Keith Richards and singer-songwriter Kenny Lynch at the release party for the uncut version of ‘Derek and Clive Get the Horn’, UK, 6th September 1993

Yet he and Dudley Moore were also deeply ambitious. For two decades, everything they did shone. Their sketch revue, Beyond The Fringe, with Alan Bennett and Jonathan Miller, was a hit on both sides of the Atlantic. Cook and Moore then cemented their partnership with the BBC TV series Not Only . . . But Also.

They were superstars who slept with endless women and, in Cook’s case, drank far too much.

They finally went their separate ways after a world tour in 1974. Moore was drawn to the Hollywood lights, while Cook headed back to Hampstead where two years’ mail awaited. He refused to open any of it.

In fact, he never opened any mail ever again. Instead, he focused on a life of shambolic indolence punctuated by lavish parties. With the royalties pouring in from 20 years of performances, he didn’t need to work — and that was fine by him. He was, he once said, ‘born to be on holiday’. 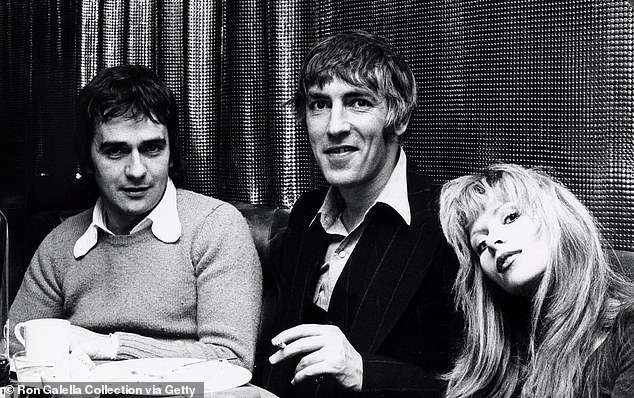 He certainly felt like that when he became friends with Victor Lownes, head of the British division of the Playboy Club, and discovered Bunny girls and a whole new level of ‘sexual goings on’.

It marked the end of his marriage to Judy. But he quickly started a relationship with Lin Chong, who worked as a secretary for Lownes and lived just 200 yards from Cook. She took one look at the state of his house and decided they should be a ‘two-home’ couple. In turn, he promised to limit his lovers to his two favourite girlfriends. Somehow they made it work.

Cook adored his home and spent a lot of time in his sitting room, reading every newspaper, chatting with his neighbour, George Weiss, who recorded hundred of hours of their meandering conversations.

At night, he’d call radio stations, putting on different personas. For two years, for example, he managed to fool thousands of listeners by calling a phone-in show pretending to be a Norwegian fisherman called Sven who was pining for his fish.

But there were terrible lows. In 1986 he was given a car for his birthday and promptly crashed it into a police car while over the limit. The following year, he ended up in a newspaper kiss-and-tell story by a former girlfriend, alleging group sex at Weiss’s house. 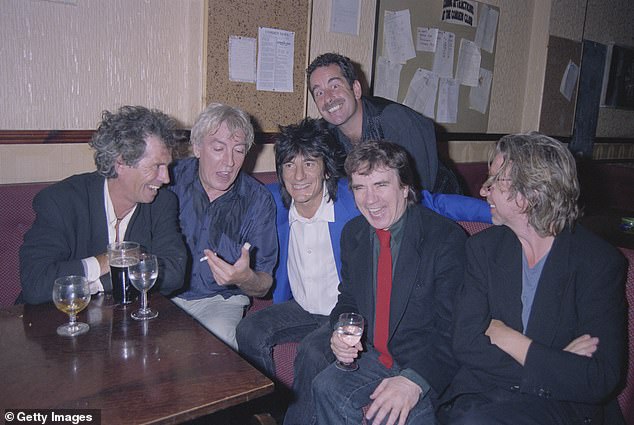 Meanwhile, his daily drinking escalated to three bottles of wine, a bottle of vodka and numerous glasses of strong lager a day.

No one seemed to mind, because the drunker he got, the funnier he became. Of course, his health suffered.

Many people said he’d failed to fulfil his potential. But he didn’t care. For Cook was utterly uninterested in projecting the ‘right’ image, claiming that he lost all ambition by the age of 24.

‘I might have some regrets but I can’t remember what they are,’ he famously commented.

After he died, Lin finally moved into Perrin’s Walk — and couldn’t bear to change a thing. Not even the graffiti or piles of stuff everywhere. In fact, according to her brother, Chiew Chong, Lin, who died in 2016, added to it.

‘Peter and Lin were both hoarders,’ he said.

This week, the Heath & Hampstead Society will adorn the house with a commemorative plaque.

It is a nice gesture, but, following a refurbishment project that took more than two years, it is almost impossible to marry this sanitised substitute with Cook’s louche party palace.