The relationship between Defence Minister Peter Dutton and the military top brass has frayed badly over the fallout of the Brereton war crimes inquiry, with armed forces chief Angus Campbell now described as a lame duck by senior politicians and former military generals.

Serving and former senior military officials have privately lashed what they regard as Mr Dutton’s undermining of efforts by special forces command and the military top brass to reform the SAS in the wake of the Brereton inquiry. 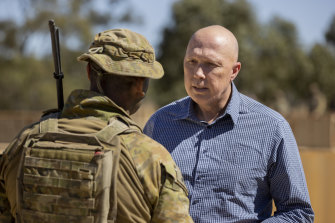 Military insiders, who requested anonymity because they are not authorised to speak publicly, said Mr Dutton had ditched or challenged a number of General Campbell’s reforms – including the military chief’s plan to remove a unit-wide citation for meritorious service in Afghanistan and his reform of special forces recruitment. These decisions had left General Campbell increasingly isolated and powerless, the sources said.

Efforts by the defence hierarchy to engage more with the Australian public via the media have also been scotched by Mr Dutton’s office, which is exercising final say over important defence announcements, the insiders say.

But Mr Dutton is unapologetic, saying in response to questions that, as Defence Minister, he has the right to overturn General Campbell’s decisions because “the buck stops with me”.

Seven former and serving high-ranking officers and officials, including those who have had recent dealings with Angus Campbell or are considered close to the defence chief, have told The Age and The Sydney Morning Herald that relations between the military top brass and Mr Dutton were at an “unprecedented” low.

“If there is a decision I disagree with and I believe it’s in the national interest to change that decision … I will do so.”

The military hierarchy is continuing behind closed doors to try to push through General Campbell’s curtailed war-crimes reform agenda, including sidelining senior officers and soldiers associated with the alleged war crimes scandal in Afghanistan and standing firm on the decision to disband SAS 2 squadron, a move that was hurriedly postponed earlier this month.

This masthead has confirmed that the decision by General Campbell to remove the SAS 2 squadron from the order of battle was based partly on a classified portion of the Brereton inquiry report, read by a small number of top military officials, which found former soldiers from the squadron had contributed to “possibly the most disgraceful episode in Australian military history” by allegedly executing multiple Afghan people during a single deployment.

A serving senior officer said Mr Dutton’s interventions had been “highly destructive of the chain of command” and showed the Defence Minister had “no faith” in General Campbell’s reform package.

A former defence service branch chief said Mr Dutton’s undermining of General Campbell was “breathtaking”. “The process is doing even more to damage the leadership, of a level I can’t recall,” the ex-general said.

“This [ministerial intervention] might be legal but it stretches or contravenes the civil-control-of-the-military conventions.”

Another retired senior officer blamed the federal government’s sensitivity about voter or veterans’ community backlash for Mr Dutton’s actions. He questioned if General Campbell had been “silenced”, adding, “I am told it is Dutton who wants to do all the talking.”

Another serving senior officer said Chief of Defence and the Chief of Army “now have no credibility – that is what Dutton has done to them”.

In a rare public statement, General Campbell addressed the controversy by saying he had “worked for a number of ministers” and all, including Mr Dutton, “treated me professionally, and with courtesy and respect”. General Campbell’s statement did not address the issue of his reforms being ditched.

Mr Dutton said: “I won’t always agree with every decision General Campbell makes. If there is a decision I disagree with and I believe it’s in the national interest to change that decision, and where I have the power to do so, I will do so. 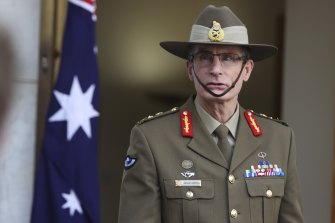 “That doesn’t undermine General Campbell, it means I’m doing the job I’m paid to do. And I am held to account through the Parliament, as it should be,” he said. He also expressed “total confidence in General Campbell and in his capacity to lead reform post-Brereton”.

However, the head of the Australian Defence Association, Neil James, who is also considered in military circles to be close to General Campbell, disputed Mr Dutton’s assertion that it was appropriate for the defence minister to overturn decisions made by the defence force chief.

“The ADA disagrees with the minister overriding several Chief of Defence Force command decisions designed to preserve the professional and moral accountability of ADF units and ADF personnel, such as the revocation of meritorious unit citations and the institution of joint-selection training for SF units. This [ministerial intervention] might be legal but it stretches or contravenes the civil-control-of-the-military conventions,” Mr James said.

“The job of ministers is … not to hamper him [General Campbell] by overriding command decisions that cut to the quick of the serious lapses in military professionalism that led to systemic war crimes.”

Mr Hastie, a former SAS captain and Afghanistan veteran, was the first prominent political voice to urge the public and military to support the Brereton inquiry, which in November referred 19 former SAS soldiers to the federal police for the alleged involvement in the execution of up to 39 Afghans.

Mr Hastie has also stood against the claim in sections of the tabloid media and veterans community that war crimes and prisoner executions were acceptable, arguing instead that perpetrators must be held to account via the legal system.

But Mr Hastie has also played a key role in overturning the recommendation from former special forces commander Adam Findlay to change the way special forces soldiers are recruited and is seen by the military top brass as more influential than they are.

Mr Findlay recommended a new recruitment process which would have put the second branch of the special forces, the Commandos, on an equal footing as the SAS in order to stamp out what Justice Brereton identified as a poisonous culture of elitism and competitiveness in special forces ranks.

But Mr Hastie has publicly argued that the SAS should retain its unique character, albeit with greater oversight, and scrapped the recruitment reform while adding an additional layer of SAS oversight by giving a more senior officer responsible for the elite unit.

Defenders of Mr Dutton’s approach, including senior politicians, have accused General Campbell of failing to assert himself by consistently making the case for his reform package. General Campbell has been silent since his November press conference to announce the Brereton inquiry’s shocking findings and sweeping reforms.

Mr Dutton’s supporters, also speaking anonymously, say General Campbell has failed to display “moral leadership” by not penalising the most senior commanders in charge of the special forces during the most disgraceful period in its history.

A senior military observer has also attacked General Campbell and army chief Rick Burr for the army’s botched recent attempted sacking of relatively junior SAS soldiers. In his war crimes report in November, Justice Brereton cautioned against sacking war-crimes accused, saying it may be preferable to allow the federal police to complete still-ongoing inquiries into the men.

The AFP, backed by the Office of Special Investigations, is investigating 19 former SAS soldiers based on Justice Brereton’s detailed findings about their alleged conduct.

Despite Justice Brereton’s caution, the army still moved to sack some of the 19 men referred to the AFP, albeit in a manner that was procedurally flawed.