Britain’s most senior naval officer last night complained that the British Government had insulted him in a row over intelligence and security.

Admiral Lord West of Spithead, 72, a decorated Falklands veteran, former First Sea Lord and a Security Minister under Gordon Brown, was denounced on the record by the Foreign Office for engaging in ‘disinformation and propaganda’ and for helping to distract attention from the war crimes of the Syrian dictator Bashar al-Assad.

Lord West believes there are serious doubts about an investigation into the use of poison gas by Syria in Douma in 2018, and that credible complaints of censorship, made by whistleblowers, have been wrongly ignored.

The unprecedented high-level slanging match is the latest and most explosive episode in this simmering scandal over poison gas and censored intelligence first exposed by The Mail on Sunday. The Admiral’s supposed misdeed was signing an international ‘Statement of Concern’ over an alleged distortion of intelligence by the UN’s chemical weapons watchdog, the Organisation for the Prohibition of Chemical Weapons (OPCW). 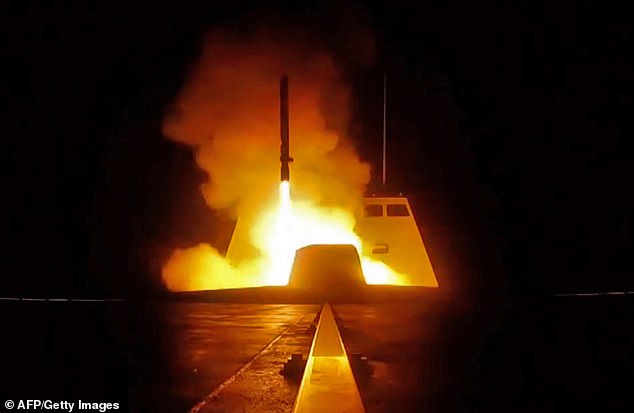 Lord West, the last to leave his ship after it was sunk by bombing in the Falklands, is still on the Navy’s Active List and maintains a close interest in intelligence and security matters. He hit back hard at the Foreign Office statement, saying: ‘It is an insult to accuse those who have concerns about the report as having a desire to whitewash the Assad regime.’

He protested that he was most definitely not an apologist for the Damascus despot: ‘I am on record on the floor of the House of Lords as having called Assad a “loathsome man” and clearly his regime has used chemical weapons at various times but that does not mean we should accept everything the OPCW says as true when there is reason for doubt.’

The Admiral is one of a number of distinguished figures demanding a proper inquiry into complaints by experienced OPCW inspectors that a report on an alleged gas attack in Syria in April 2018 was censored to give a false outcome.

The row is highly sensitive because Britain, France and the US bombed Syria after the attack, without waiting for impartial evidence or proof that Assad was to blame. They could face war crimes charges if the bombing turned out not to have been justified. It is deeply inconvenient for the Government that a figure as senior and unimpeachable as Lord West should have broken ranks and questioned the official version.

Lord West told The Mail on Sunday last night: ‘It is crucially important that organisations like the OPCW are squeaky clean. Intelligence has to be pure. You should not try to warp the intelligence to suit you. That is very, very dangerous and wrong.’

He fears there may have been pressure on the OPCW to come up with a particular result. ‘Assad is horrible, but the people we are dealing with in Syria are horrible. What sort of regime will they create if we get regime change? There are no good guys in this at all.’ 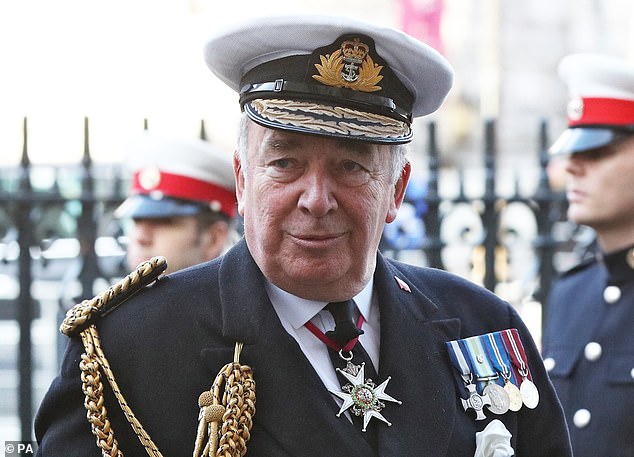 Hitting back: Admiral Lord West pictured arriving for a service of thanksgiving for the life and work of Sir Donald Gosling at Westminster Abbey in London

Lord West said he had met a brick wall when he had repeatedly complained about what seemed to be manipulation at some level.

He added: ‘It does seem to me that there is enough evidence to show that the work the OPCW did on Douma was possibly flawed. The whistleblowers – a term I hate, but how else can they be described? – have been ignored.’ And he made it clear he was prepared to undergo bombardment in a good cause. ‘I know I will get flak, but I have had flak before.’ Describing the Foreign Office denunciation as ‘an outrageous allegation’ he insisted: ‘There are very reasonable concerns about what is going on.’

The ‘Statement of Concern’ signed by Lord West was issued in New York by the Courage Foundation, a body dedicated to supporting whistleblowers anxious to tell the truth against official pressure.

It says: ‘OPCW management now stands accused of accepting unsubstantiated or possibly manipulated findings with the most serious geo-political and security implications. Calls by some members of the Executive Council of the OPCW to allow all inspectors to be heard were blocked.’ It adds: ‘To date, unfortunately, the OPCW senior management has failed to adequately respond to the allegations against it and, despite making statements to the contrary, we understand has never properly allowed the views or concerns of the members of the investigation team to be heard, or even met with most of them.

‘It has, instead, side-stepped the issue by launching an investigation into a leaked document related to the Douma case and by publicly condemning its most experienced inspectors for speaking out.’ 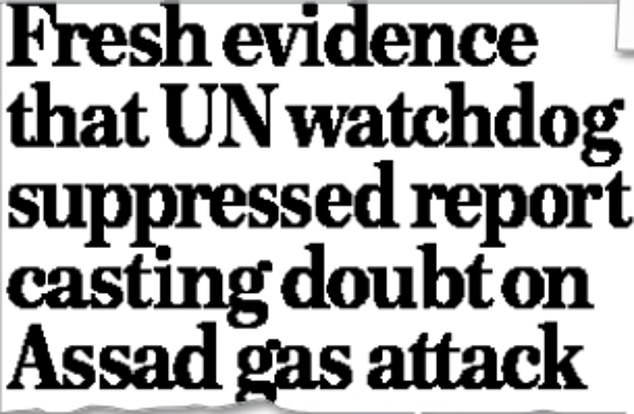 Shining a light: Some of Peter Hitchens’ other reports in the MoS on the 2018 gas attack

They call for a new and impartial inquiry into the dissenting inspectors’ allegations, urging the setting up of ‘a transparent and neutral forum in which the concerns of all the investigators can be heard as well as ensuring that a fully objective and scientific investigation is completed’.

The Foreign Office statement read: ‘The OPCW’s fact-finding mission produced an extremely thorough and clearly evidenced report on the incident in Douma on April 7, 2018.

‘We are confident in the report’s conclusion that a toxic chemical, likely chlorine, was used as a weapon and we maintain full confidence in the OPCW. Those who choose to attack the OPCW do so to draw attention from the Assad regime’s repeated and unrepentant use of chemical weapons; and to deflect questions on their own failures to abide by the Convention. It is disinformation and propaganda.’

The MoS alerted the Foreign Office to the fact that it was attacking a decorated officer, Privy Counsellor and former Minister, but it made no response.

The OPCW’s headquarters in The Hague did not respond to requests for comment.