Piers Morgan has slammed Alex Beresford for launching a ‘premeditated attack’ during their on-air Meghan Markle row that cost him his job at Good Morning Britain (GMB) in his first TV interview since he quit the show.

The 56-year-old journalist caused a social media firestorm last month after he said he ‘didn’t believe a word’ of what the duchess said during her extraordinary interview with US chat-show legend Oprah Winfrey.

It led to an explosive on-air clash with GMB weatherman Beresford, who accused Morgan of ‘trashing’ the Suits actress before he stormed off set. Later that day, the MailOnline columnist quit the ITV breakfast show.

Sitting down with Fox News host Tucker Carlson on Monday to tell ‘MY truth’ about the controversy surrounding his criticism of the Sussexes, Morgan said Beresford’s comments were part of a ‘premeditated attack’.

During his hour-long interview with the Tucker Carlson Today programme on the Fox Nation streaming service, Morgan hit out at Beresford, calling the 40-year-old ‘the stand-in weather guy’ and ‘not a journalist’.

He also revealed he was ‘disappointed’ by his co-host Susanna Reid’s apology after he stormed off set – but said he believed Reid may have acted ‘in the grip of fear’ of a ‘huge Twitter pile-on’ if she had defended him.

Morgan even poured cold water on allegations that Meghan received racist coverage in the British Press, saying: ‘I never saw that, I don’t believe that’ as he pointed to the media’s positive coverage of the Royal wedding in 2018.

Instead, he accused the duke and duchess of ‘complete hypocrisy’ over their interview with Oprah and said he has the ‘universal support’ of the British public.

The duchess said she was ignored when raising concerns about her mental health and that racist comments had been made before the birth of her son, Archie. 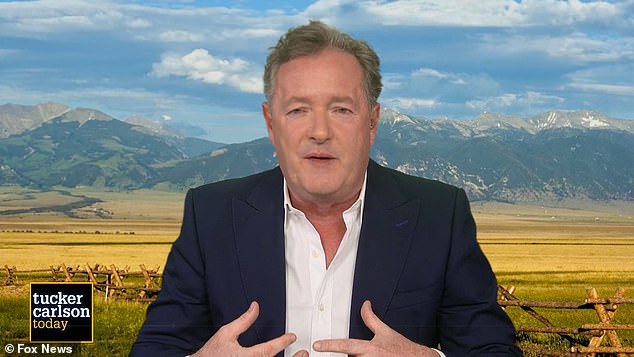 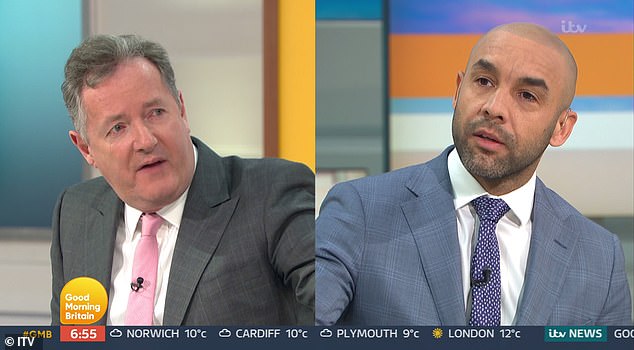 The 56-year-old sensationally quit the ITV breakfast show last month, in the wake of the Duke and Duchess of Sussex’s bombshell interview with Oprah Winfrey. Before his departure from the show, Morgan clashed on air with GMB weatherman Beresford 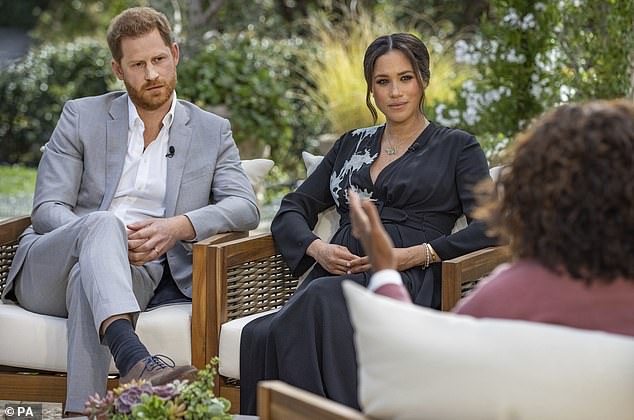 Speaking to Tucker, he said of Beresford: ‘He is the stand-in weather guy, he’s not a journalist, he’s someone I’ve helped in his career like he has asked me to.

‘He sent me a private message in which he expressed some concern about what he felt I wasn’t really understanding about where Meghan Markle was coming from as a bi-racial woman. He is himself a bi-racial man so he wanted to explain so I said come on air, let’s have the conversation.

‘But the moment he came on air, he came with a pretty premeditated attack on me on a pretty personal level and frankly I just wasn’t going to have it.

‘I walked off… I was quite angry in the moment, he claimed that I have a personal vendetta against Meghan Markle, which I don’t.’ 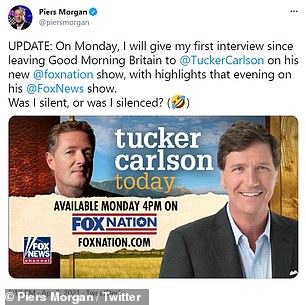 In another update shared on Friday evening, Piers poked fun at Meghan, 39, as he referenced the moment when Oprah, 67, asked whether she was ‘silent or silenced?’ to which the wife of Prince Harry, 36, accused the Royal establishment of ‘silencing’ her

During the GMB clash, Beresford responded to Morgan’s claims that he used to talk to Meghan and she ‘dropped him’ once she started dating Prince Harry.

He said: ‘I understand that you don’t like Meghan Markle, you’ve made it so clear a number of times on this programme, and I understand you’ve got a personal relationship with Meghan Markle and she cut you off.’

Beresford told Morgan: ‘She’s entitled to cut you off if she wants to’ – prompting Morgan to then storm off the GMB set.

Morgan was also asked by Tucker how he felt the day after he stormed off set, when his co-host Reid apologised for his behaviour.

‘It seems like you have affection for her,’ Tuckers said.

Morgan replied: ‘I was disappointed, but she might have done it in the grip of fear, that if she spoke too highly in favour of me, the same thing might happen to her.

‘There would be a huge Twitter pile-on. By an orchestrated mob.’

The former editor of the Daily Mirror also said he doubted that Meghan had been subjected to racist coverage by the British Press.

Morgan told Tucker: ‘Contrary to what many Americans have been led to believe, the press coverage of these two right up to the wedding was completely over-the-top euphoric. Everyone in Britain was thrilled that finally we were having a non-white bride in the royal family, it hadn’t happened.

‘We were all very happy about this. I wrote about how wonderful it was on the wedding day. This narrative from the start that she was was bombarded with horrible, hateful, racist press coverage is another disingenuous load of nonsense fuelled by the Oprah Winfrey show where they flashed up a series of headlines, many of which had been deliberately cut to create a misconstrued impression, and many were actually American tabloids not British.

‘But no, this narrative had to be believed, that Meghan Markle was targeted for her skin color by the beastly British tabloids.

‘I never saw that, I don’t believe that, I’m a former British tabloid editor myself and I would know if there was racist coverage in the British papers and there wasn’t.

‘There may have been on social media because that’s a cesspit, we know that, but I didn’t see it in the mainstream British Press.’

In his bombshell interview, Morgan stood by his comments, accusing Meghan and Harry of the ‘most extraordinarily disingenuous smear, hit job’ on the royal family.

And he said he has the backing of the public. Morgan said: ‘Old, young, black, white, it didn’t matter. They’ve been coming up to me in their droves all day every day.’

Morgan said people either agree with his comments on Meghan or defended his right to free speech. ‘The British people have seen through this,’ he told the Tucker Carlson Today programme on the Fox Nation streaming service.

Morgan said he has had a ‘lot’ of job offers since leaving Good Morning Britain and explored the circumstances surrounding his departure.

He admitted that he should not have walked off the set during his row with Beresford, but said he ‘didn’t particularly like’ Reid’s apology for him.

However, Morgan went on: ‘I honestly think she was in the grip of fear. I think she was fearful that if she went too far in saying nice things about me, the same thing might happen to her, that there would be a huge Twitter pile on.’

In his hour-long interview, Morgan described Meghan, who rose to fame starring in TV drama Suits, as the ‘delusional duchess who is on the make’.

Criticising the couple for their commercial deals with the likes of Spotify and Netflix, Morgan said, ‘they’re not making all this money through talent – Meghan was an OK actress on a show not many people watched’.

And of Harry, Morgan praised his work in the Armed Forces, before adding: ‘What’s happened to that guy? That he’s turned into this whiny brat in his mid-30s complaining his dad isn’t still financing everything he does.’

Asked by Carlson what the future holds for the duke, 36, and duchess, 39, Morgan said: ‘She has a track record of ditching everyone and everything when they cease to be of use to her so my advice to Harry is make sure you remain of use.

‘And his primary use, it seems to me, is he has a royal title and she has been ruthlessly exploiting that title to the tune of hundreds of millions of dollars.’

He accused the couple of telling ‘so many ridiculous whoppers’ in their March interview with Winfrey and dismissed claims he was racist for not believing them.

He said the interview was ‘tacky, tasteless, disingenuous, and I’m afraid, I believe, in some cases, downright lying on a global scale’.

And Morgan used his appearance on Carlson’s show to rail against what he described as the ‘woke mob’ and urged the public to ‘stand up and say ‘no”.

He pointed to Sharon Osbourne’s recent departure from a US chat show as an example of so-called cancel culture.

Osbourne left The Talk after defending Morgan against allegations of racism over his comments on Meghan.