Poets' Corner in Westminster Abbey will be used for Covid vaccinations

It’s the final resting place of some of Britain’s greatest writers, including Charles Dickens, Jane Austen and Lord Tennyson.

But from tomorrow, Poets’ Corner in Westminster Abbey will be more than just a monument to literature when it is converted to a Covid vaccination centre.

As the mammoth roll-out continues to deliver on its great expectations, doctors and nurses will begin administering jabs from the historical site on Wednesday.

Sir Simon Stevens, chief executive of the health service, confirmed today that the Abbey would be used as a vaccine centre and Poets’ Corner its clinic.

There are now more than 1,600 vaccination sites across the country and almost 23million people have had at least one dose of a coronavirus jab. 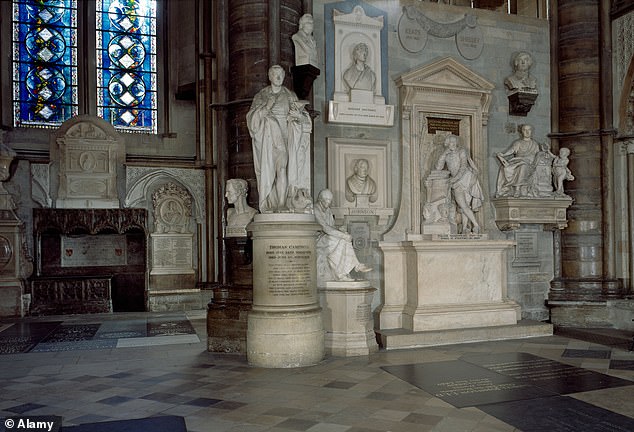 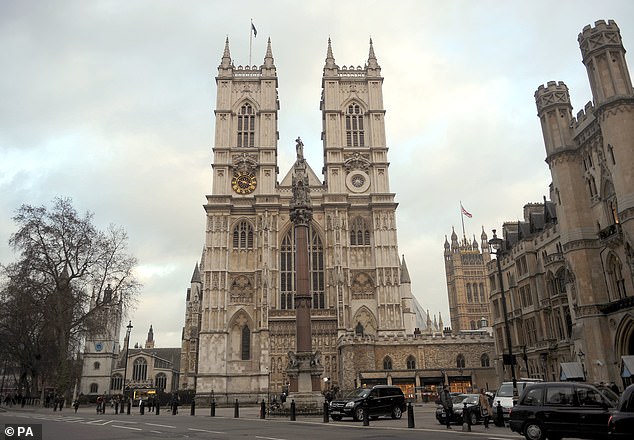 Westminster Abbey will serve as a vaccination centre for people living nearby, in the centre of London 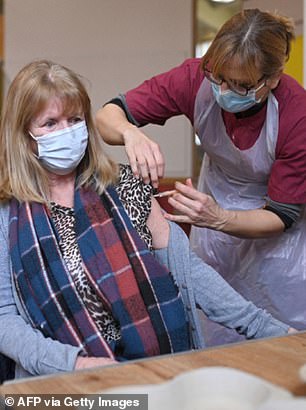 A network of more than 1,600 vaccination sites across the country has helped a total of 24million people (Pictured: A woman being immunised at a church in Sheffield)

Sir Simon told Parliament’s health committee about the new centre while he was praising the vaccination programme today.

He said: ‘This is a huge community mobilisation across the country and that speaks to the fact that part of the success with uptake here is that this is not just a medical exercise, this is also reaching in communities with community leaders and engaging people.

‘Whether that’s in mosques or sports halls or rugby clubs or today, I’m pleased to say, Westminster Abbey where patients will now be vaccinated in Poets’ Corner.’

Poets’ Corner has been the tomb of some of the UK’s most famous authors and poets for hundreds of years, starting with Geoffrey Chaucer in 1400.

EU embroiled in fresh vaccine row – this time with Russia

The EU has embroiled itself in yet another row with a vaccine-maker – this time in Russia – after a senior official at the bloc’s medical regulator warned using its Sputnik V jab is ‘like playing Russian roulette’.

Christa Wirthumer-Hoche, an Austrian doctor and head of the European Medicines Agency’s board, made the remark on Monday as she urged member states to wait for the EU’s sign-off on the Sputnik V jab before rolling it out.

But her remark caused fury at The Gamaleya Center, which makes the Sputnik jab, which demanded an apology – saying she has no right to undermine confidence in their jab, and that her remarks cast doubt on the EMA’s impartiality.

It comes just weeks after the EU got into a bitter spat with British-Swedish vaccine maker AstraZeneca – accusing the company of shipping doses meant for the continent to the UK, meaning their vaccine orders fell short.

Classic writers including Charles Dickens, Jane Austen, Charlotte and Emily Brontë, Rudyard Kipling, Lord Tennyson and Robert Burns are all either buried or commemorated there.

And more recently, the poets Ted Hughes and Philip Larkin, and C.S. Lewis, author of The Lion, the Witch and the Wardrobe, have been buried there.

It will now be used as a vaccination clinic for people to get immunised against Covid-19.

There are 1,655 vaccination centres across England, the majority of them in GP practices.

But the NHS is also using hospitals and large venues as ‘hubs’ where they can ferry huge numbers of people in and out in a day.

And medics have also taken over smaller community facilities, including churches and village halls, to help them make jabs accessible to everyone.

The new clinic comes as the NHS plans to boost vaccine uptake by sending people text messages and reminders, and has opened the rollout to all people aged 55 and over.

Texts will now be sent to almost half a million people so they can reserve an appointment at a vaccination centre or pharmacy.

Reminders will then be sent every two to three weeks to encourage people to get their vaccine if they have not taken up the offer.

If the move proves successful, younger people can expect to receive texts ahead of official NHS letters landing on doormats.

Some GP-led and hospital vaccination services are already using text messages to invite people for a vaccine.

Anyone who prefers not to travel to a vaccination centre or pharmacy-led site can choose to wait to be invited by their GP.

NHS national medical director Professor Stephen Powis said: ‘The NHS vaccination programme, the biggest in health service history, continues to go from strength to strength and we are now building on that momentum by trialling a quick and easy service that will hopefully make it more convenient for people to book their life-saving jab.

‘I had my vaccine this week – it was simple, quick and painless – and I would encourage others who have not yet taken up the offer to come forward and receive the jab.’

The new text message will be sent using the Government’s secure Notify service and will show as being sent from ‘NHSvaccine’.

Dr Nikki Kanani, GP and NHS medical director for primary care, said: ‘We know that some people are rightly worried about scams going around, but if the message comes from ‘NHSvaccine’ and links to the NHS.uk website you can be sure that it’s the right invite.

‘For any messages you might get about the vaccine, always remember that the NHS will never ask you for your bank account or card details, your PIN or banking password.

‘The NHS will also never arrive unannounced at your home to administer the vaccine, or ask you to prove your identity by sending copies of personal documents such as your passport, driving licence, bills or pay slips.’