Police responded to ‘specific threats’ against politicians over weekend

The chief of the Australian Federal Police has revealed officers responded to specific threats against politicians over the weekend as the government reviews safety protocols for elected representatives in the face of rising extremism.

Law enforcement and intelligence agencies say the environment has become more dangerous amid growing concern about threats to federal and state politicians – much of it associated with anti-lockdown and anti-vaccine protesters. 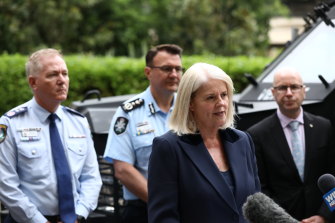 Australian Federal Police Commissioner Reece Kershaw said authorities had observed what had occurred overseas in the US and Britain, including the killing of MP Sir David Amess in an incident allegedly motivated by religious and ideological extremism.

“So we take it very seriously, the security of MPs,” Mr Kershaw said on Monday. “And even on the weekend, we had to mobilise a number of resources based on specific threats against different members of Parliament.

“We know that the environment has changed rapidly due to a number of factors and … we will be making sure we can do as much as we can to keep our parliamentarians safe.”

Mr Kershaw said the protection of federal MPs was based on threat assessments informed by the Australian Security Intelligence Organisation, and he was working with Home Affairs Minister Karen Andrews on a review of safety arrangements.

Mrs Andrews said the government was “very aware” there were people in Australia who wished to harm politicians.

She said the threats of violence against state premiers and other politicians were “absolutely unacceptable”.

A gallows was taken to an anti-government rally in Melbourne last week and attendees engaged in violent rhetoric towards Victorian Premier Daniel Andrews.

Western Australian Premier Mark McGowan, his family and his staff have also faced threats from people opposed to COVID-19 vaccinations.

“I hold the Prime Minister responsible for failing to call out, unequivocally, the violent and extreme comments that are made, the taking of gallows, the threatening of Labor MPs and premiers and independents, the fact that so many MPs have to have security at the moment,” Mr Albanese told ABC radio on Monday.

Mr Morrison last week said the protesters who brought a gallows and nooses to the Victorian Parliament were “appalling”.

He reiterated his view that Liberal MPs should not have attended the protests, at which people chanted “kill Dan Andrews”.

“I couldn’t have been clearer about denunciating the violence and threats and intimidation,” Mr Morrison said.

Mrs Andrews said violence was not an acceptable way of disagreeing with others in Australia.

“The threats to state premiers, to other parliamentarians, are absolutely unacceptable and the federal government has been unequivocal in terms of its decrying and calling out the fact that this is not acceptable, and we will continue to do so,” she said.