THIS is the powerful moment an Afghan woman bravely stared down the barrel of a Taliban militant's gun as chaos erupted on the streets of Kabul.

The image, which was posted online, came amid a female-led protest in the capital on Tuesday as the terror group continues to brutally clamp down on their freedoms. 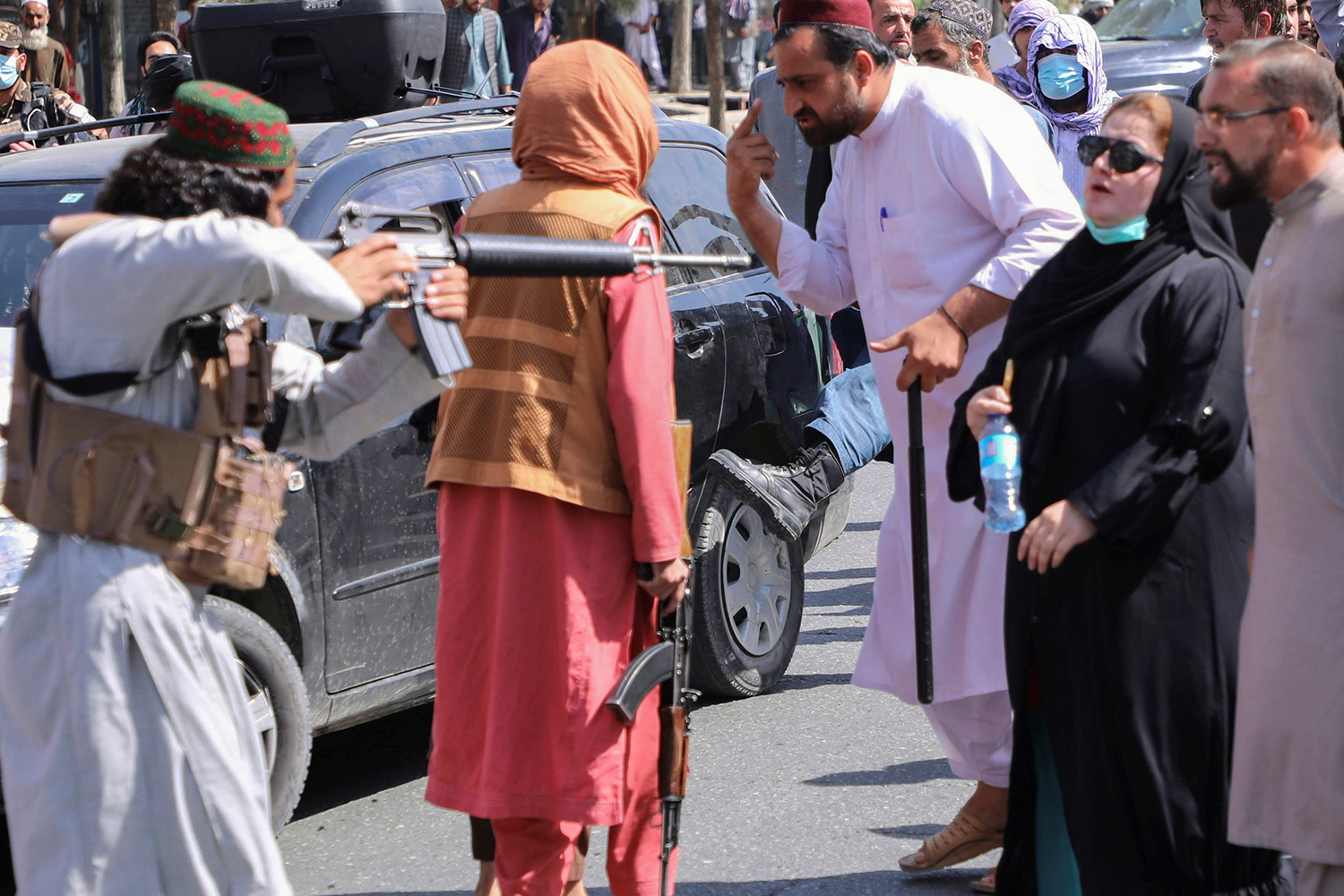 The Sun previously reported that the heavily armed extremists opened firewith machine guns in order to break up the march.

At the time, protesters – many of whom were women – were reportedly chanting for "freedom" as hundreds of people flooded the streets waving placards and the former flag of Afghanistan.

Taliban forces have continued to face opposition after surging back to power – even as the group claimed to have crushed the final pocket of resistance in the Panjshir Valley.

Chaos erupted as the protesters chanted slogans such as "Long live the resistance" and also took aim at neighbouring Pakistan, who some Afghans have accused of aiding the Taliban.

But, as people started to scurry to safety, clips soon emerged showing Taliban fighters armed with canes striking women who were taking part in a protest near a university .

It came just one day after the institutions reopened with segregated classes.

And other footage showed a group of women in an underground car park, with Aamaj News Agency reporting they had been rounded up like cattle to stop them rejoining the march.

Other reports state the Taliban fighters also appeared to be taking pictures of female activists – sparking fears they may be compiling dossiers of people they consider troublemakers.

"The Islamic government is shooting at our poor people," one panic-stricken woman on the street says over sounds of gunfire in an Iranian television news video clip posted on Twitter.

"These people (Taliban) are very unjust, and they are not human at all." 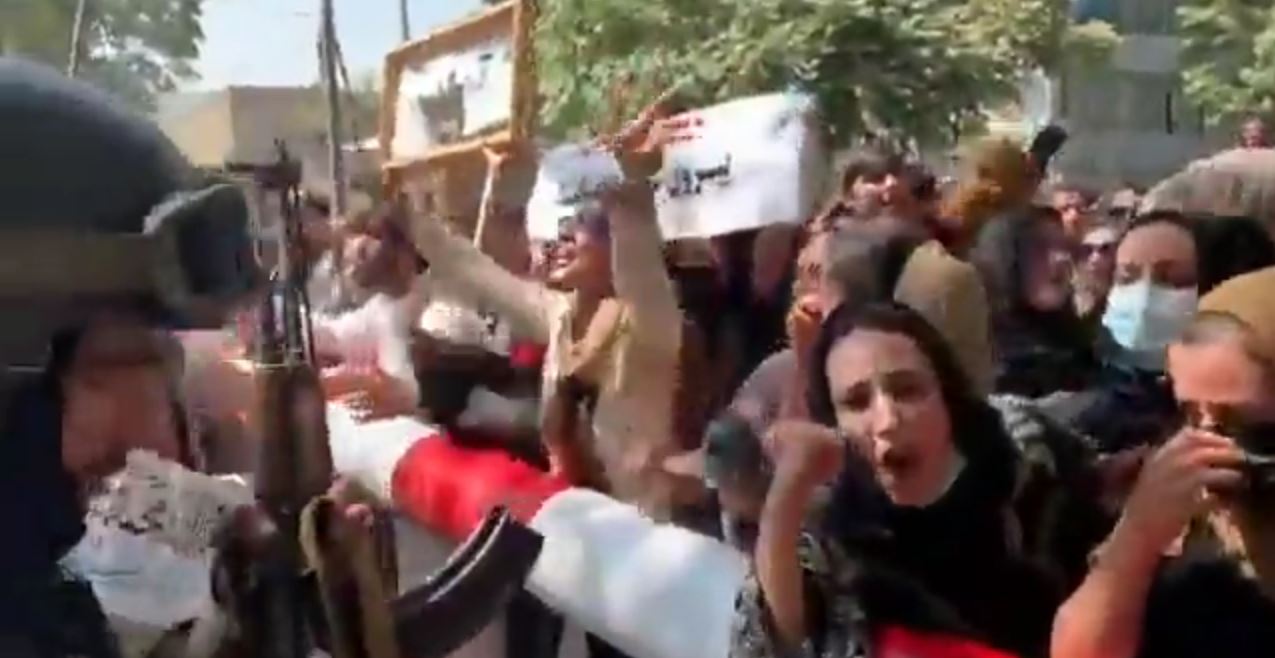 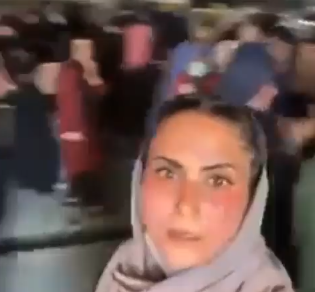 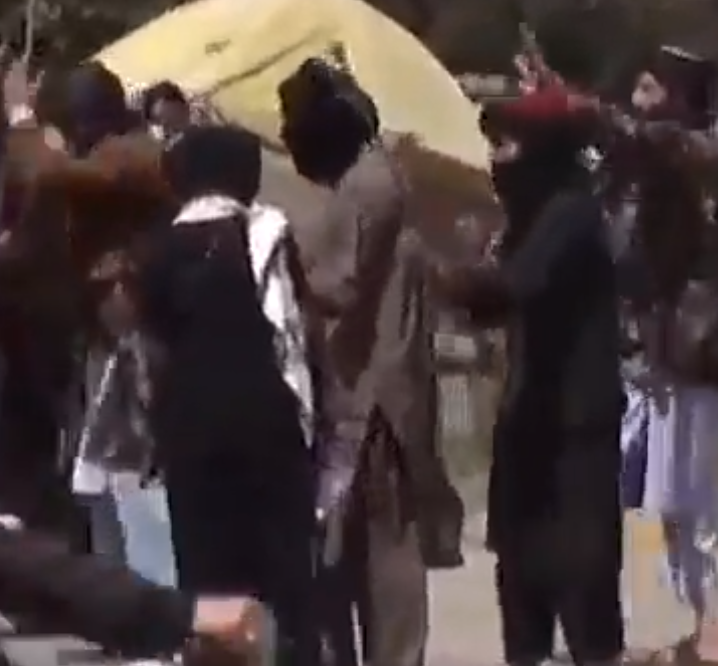 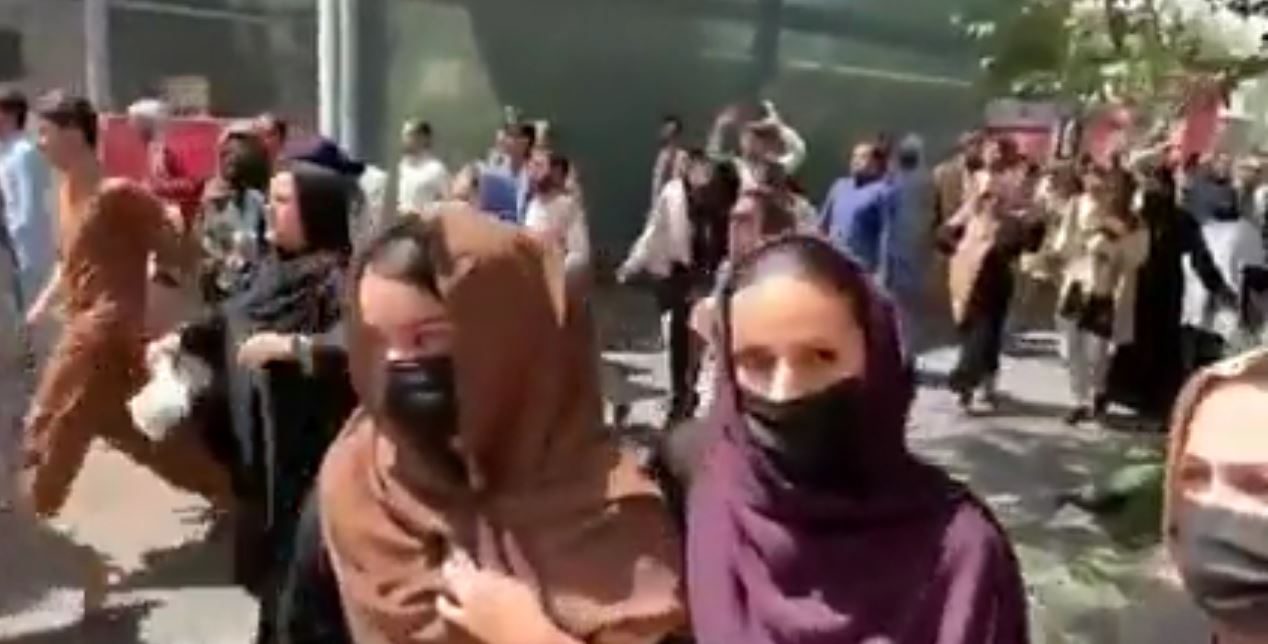 It comes as women now live in fear for the future under the new rule after the brutal, oppressive and sexist laws enacted by the group in the 90s.

New rules have already been imposed meaning women in some circumstances have stay in "waiting rooms" until men have left the building.

And they have also been advised they should wear an abaya robe and niqab covering most of the face.

And it has been reported the Taliban executed a pregnant female police officer in front of her kids because she took down one of their flags.

Women already face being whitewashed from public life – with shop fronts featuring female faces being painted over and female newscasters being replaced on TV.

The brutes have already reportedly burnt to death a woman they said served below-par cooking to its members. 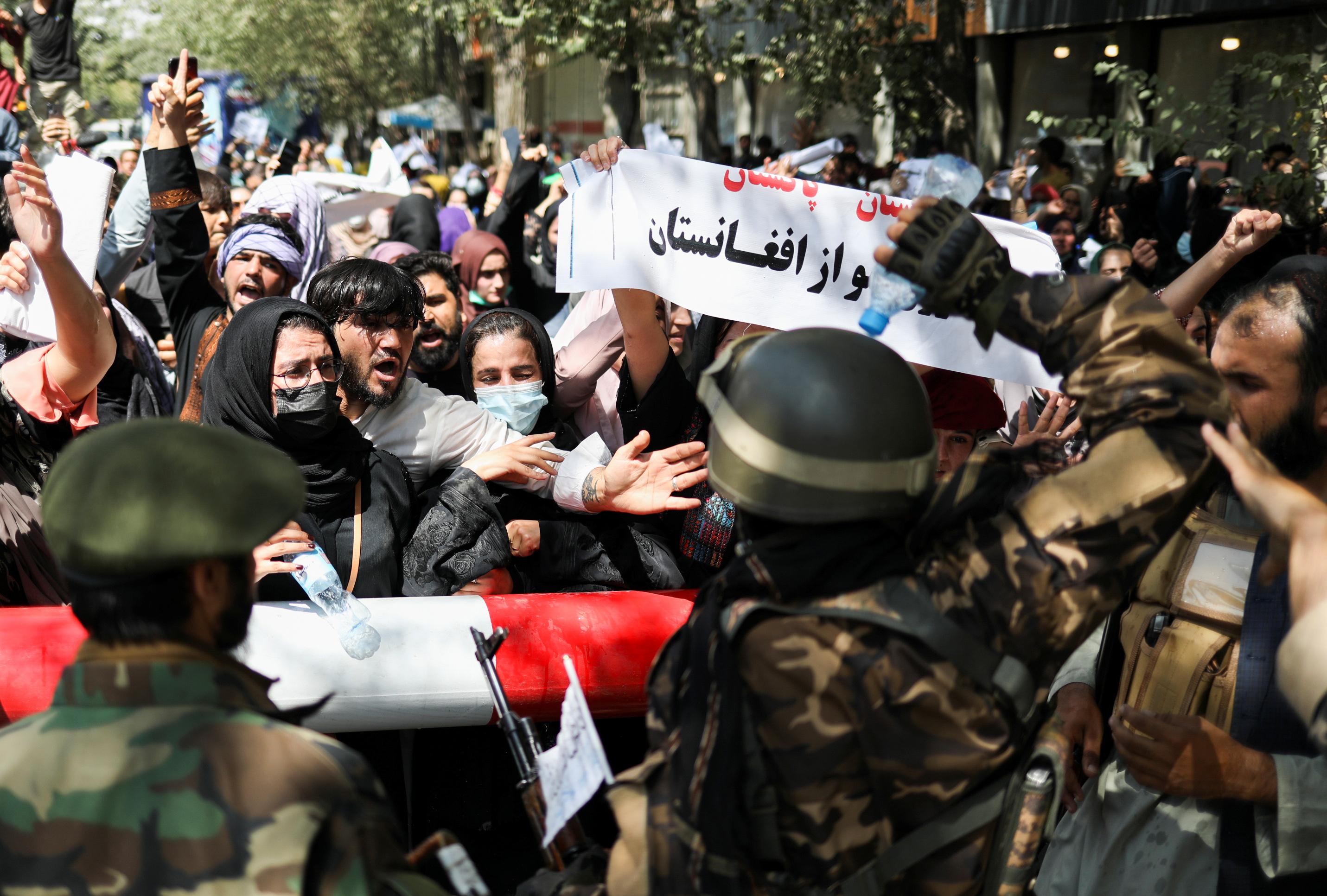 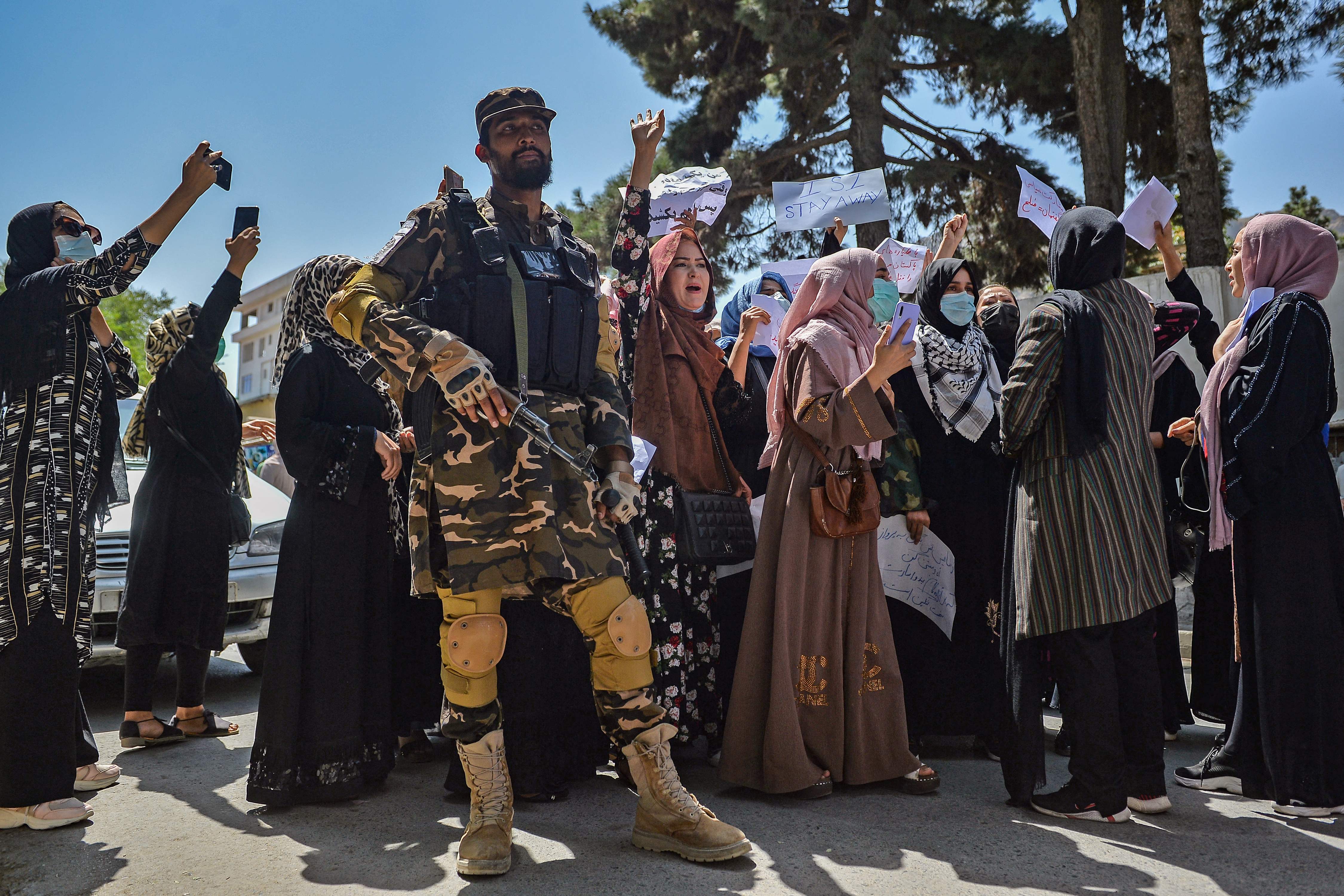 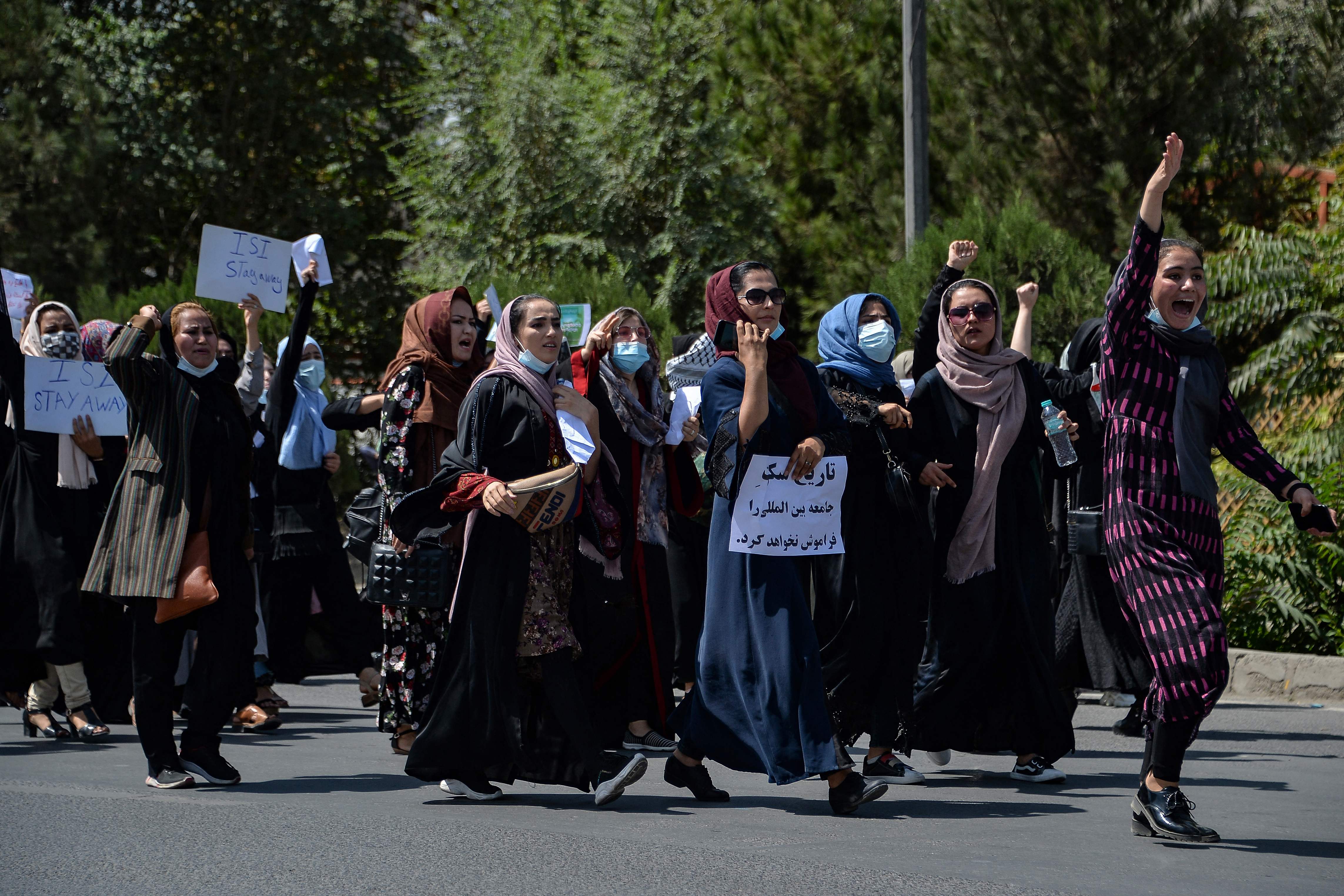 Taliban squads have been going door to door in Afghanistan kidnapping children as young as 12 to use as child brides and sex slaves since they swept back to power in Afghanistan.

British, American and other allied forces defeated the Taliban in 2001 after they allegedly harboured al-Qaeda terrorists who plotted the World Trade Centre attacks on 9/11.

Western nations have spent 20 years trying to rebuild Afghanistan as a new democratic government was installed and brutal laws enacted by the Taliban were ended.

However, the occupation was under constant attack from terrorist forces – and US President Joe Biden had declared his desire to end so-called "forever wars".

Some 20 years of work was undone in a matter of weeks as the Taliban surged back to power – sometimes unopposed – and recaptured Kabul as Western forces boarded evacuation planes.

Biden in particular is facing heavy criticism over the botched handling of the withdrawal in what is being described as one of the biggest foreign policy disasters since the Vietnam War.