Pregnant woman, 28, throws a bowl of scalding soup at an 11-month-old girl at a restaurant because ‘the baby is too noisy’

A pregnant woman in China has been caught on camera tossing a bowl of scalding soup at a ‘noisy’ baby in a restaurant.

The mother-to-be, identified as 28-year-old Ren, was angry at the fact that the 11-month-old girl had been hitting the table with a spoon, said police.

The child sustained burns on her back and buttocks. The culprit avoided a 15-day detention because the Chinese law prevents pregnant women from being punished. 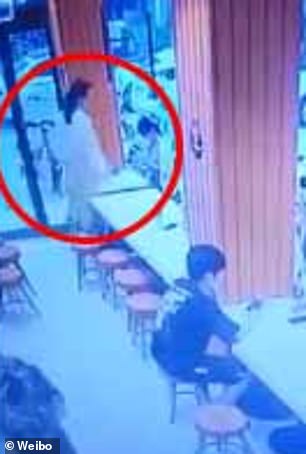 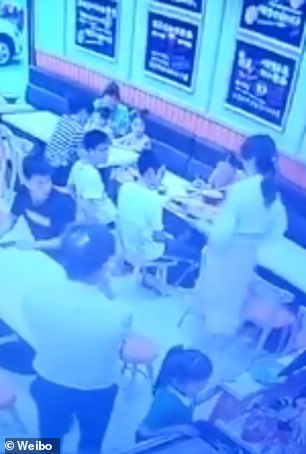 Ren (left, circled), 28, walks into the restaurant after having a row with the baby’s mother. She takes up a bowl of hot soup from a table (right) and moves towards the 11-month-old victim

The incident took place yesterday evening in the city of Xiangcheng in central China’s Henan Province.

Police said Ren had a row the baby’s mother, Yang, shortly before the incident due to the sound the baby had made.

Ren’s husband persuaded her to leave the restaurant.

However, Ren returned to the diner about 10 minutes later to retaliate on the infant, police said in a statement today.

A worker at the restaurant told Chinese news outlet Btime.com that the attacker was about six months pregnant.

The worker said the woman had been in a bad mood due to a previous quarrel with her husband. 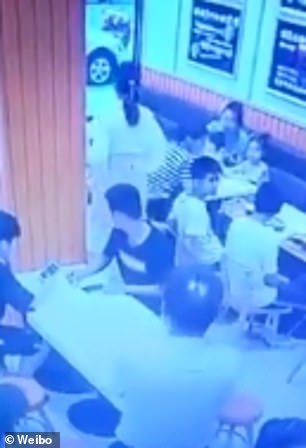 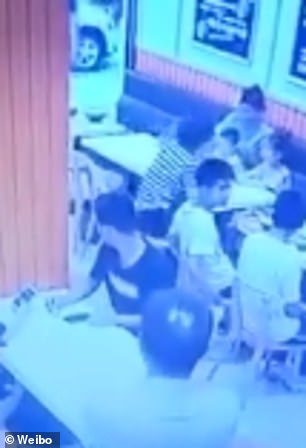 The pregnant woman walks up to the baby and her family before tossing the extremely hot liquid at the little girl (left). The incident has left burns on the baby’s back and buttocks

Surveillance footage circulating on social media shows Ren taking up a bowl of food, walking up to the baby and her family before throwing the liquid content at the little child.

Both parties were eating at a restaurant specialising in Chinese dish called ‘malatang’, which is hot and spicy broth with meat and vegetables.

The Xiangccheng police issued a 15-day detention and 500 yuan (£56) fine to Ren. But they said they couldn’t take her into custody because she is pregnant.

The Chinese criminal law prevents women from being detained or jailed if they are pregnant or nursing their babies.

Ren has paid the medical bills for her victim, according to police.

The police are still assessing the seriousness of the injuries of the baby and her mother as they carry out further investigation.