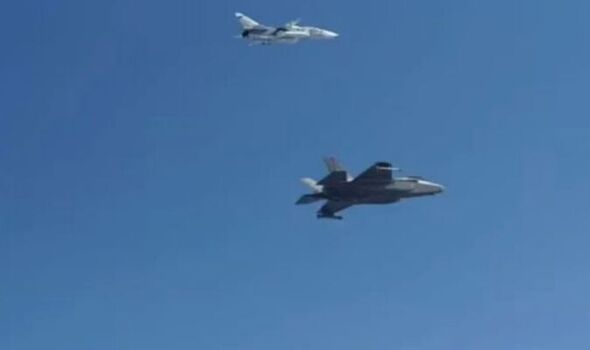 The Russian aircraft were spotted off the coast of Finnmark in the north of Norway by two F-35 fighter planes on Thursday, May 26.

The Kremlin planes, a Mikoyan MiG-31 ‘Foxhound’ and Sukhoi Su-24 ‘Fencer’ retreated east after they were intercepted by Norway’s jets.

“CRC (Control and Reporting Centre) Sørreisa (in Finnmark) reported the aircraft, and NATO ordered our F-35s on their wings.

“The Russian aircraft flew to the Norwegian Sea before returning east. F-35 is on permanent readiness for Norway and #NATO. #WeAreNATO #f35”

The jets were intercepted outside Finnmark, in Norway’s far north, but were never in official Norwegian airspace.

Asked if the incursions were a threat to Norway, she said: “I do not want to say that, because we are used to it happening, and there is nothing illegal in it.

“We pay close attention to all activity in our local areas.”

It comes amid rising tensions between Russia and Finland since the country formally applied to join NATO in the wake of Vladimir Putin’s invasion of Ukraine on February.

Finland and Sweden simultaneously submitted their applications for the military alliance earlier this month, marking a historic geopolitical shift in response to Russia’s aggression.

The two nations had long been partners of NATO but were prompted to seek formal membership by the conflict in Ukraine, which has passed its third month.

The expansion marks a significant step back for President Putin, who justified the invasion by saying he wanted to prevent the alliance from expanding further east.

When the two countries first announced their intention to join the alliance they were met with an outraged reaction from the Kremlin, with the Russian Foreign Ministry warning that move would threaten to upend the “stability and security of Northern Europe”.

However, Putin said this week the proposed NATO enlargement posed “no direct threat for Russia” and that he had “no problems” with either Finland or Sweden.

In response to the move, President Putin said the proposed NATO enlargement posed “no direct threat for Russia” and that he had “no problems” with either Finland or Sweden.

However, he warned that the Kremlin would respond if the alliance installed military bases or equipment in either country.

Speaking on Monday, May 16, when Sweden formally announced its membership application, Putin warned that “expanding military infrastructure on to this territory would provoke a response from us [ . . .] based on the threats they create for us”.