For the 14th time, Spain’s Rafael Nadal is the French Open champion.

The King of Clay defeated Norway’s Casper Ruud in straight sets, nailing down a dominating 6-3, 6-3, 6-0 win in just two hours and 18 minutes.

It wasn’t the most suspenseful match ever played. It was Ruud’s first Grand Slam final, and he was facing a Roland Garros legend. He put up a good fight, but Nadal just demolished him, showing he still had the juice to neutralize any advantage Ruud might have had. Even at 36, and dealing with a degenerative foot condition, he still played like someone 10 years younger.

Just when you think you’ve got him 🤯#RolandGarros | @RafaelNadalpic.twitter.com/M5IMpVHPuX

Nowhere on the court is safe 💪#RolandGarros | @RafaelNadalpic.twitter.com/jqClIqFn12

Ruud did have a genuine shot to make this a competitive contest. After an unsettled first set, Ruud started the second set by coming back from 30-0 to win the first game. Suddenly he had a 3-1 lead, and it looked like Ruud was starting to figure out how to challenge Nadal and give himself a chance.

Unfortunately, that’s when Ruud’s game completely collapsed. After going up 3-1, Ruud didn’t win another game in the entire match. Nadal won the final 11 games, and by the end it looked like Ruud had mentally accepted his fate. When Rafa’s on point, there’s nothing you can do.

Nadal had kind words to say about Ruud, Norway’s first Grand Slam finalist, during his victory remarks. Ruud attends Nadal’s tennis academy in Spain, and Nadal knows his family well (despite having never played Ruud competitively). Nadal knows the next generation of tennis stars is already here, and he’s been unfailingly respectful of younger players during this tournament (and through the years as well).

“Casper, it’s a real pleasure to play with you a final here at Roland Garros. I want to congratulate you for an amazing career you are having & especially these 2 weeks are a very important step forward, so I am very, very happy for you … You are doing great, you are great!” pic.twitter.com/K5zVPfakVJ

Nadal’s foot was worse than anyone knew

While Nadal’s rib injury cost him time over the past few months, his foot — he suffers from a degenerative foot condition that causes him a lot of pain — ended up being the biggest concern. Every commentator voiced concern that when matches go long, Nadal’s foot becomes a bigger issue. But it was worse than anyone knew.

Following his victory at Philippe Chatrier on Sunday, Nadal revealed that after his second round win over Corentin Moutet, his foot was in so much pain that he couldn’t walk.

Nadal on French TV said that his worst moment of the tournament was after the match against Moutet as he just couldn’t walk anymore. Said he had to have his foot anesthetized to be able to keep going, thanked the doc form the Spanish federation.

The only reason Nadal kept playing was the injection he got for his foot.

Rafael Nadal explaining on Eurosport that he played with “no feeling in the foot and an injection on the nerve, so the foot was asleep” #RolandGarros

So if you’re keeping score, Nadal played Botic van de Zandschulp, Felix Auger-Aliassime, Novak Djokovic, Alexander Zverev, and Ruud with one foot asleep. That alone is phenomenal, but doing that clearly took its toll on Nadal. In an interview with NBC’s Maria Taylor after his win, Nadal said that it’s been a difficult few weeks, and he simply can’t keep playing this way.

Is there a chance you play the French Open again? “I don’t know. … I would love to keep coming, but at the same time we need to find a solution … because I can’t keep going the way that I am doing,” https://t.co/Zom77kmXmE

At this point in Nadal’s career, everything feels precious. Every set, every game, every point could be part of his last, glorious go-round at Roland Garros or even Grand Slams in general. And if this is his last time on the red clay in Paris, this tournament had everything a tennis fan (and a Rafa fan) could want. A dramatic, historic storyline. Several comebacks from the brink of elimination. Two rivals facing off. The emotions of playing against your former coach’s new student, and witnessing an opponent’s match-ending injury. The aging star making one last stab at glory.

He did it all, and got it all done. Nadal is at the top of men’s tennis once again, winning his 22nd Grand Slam championship, the most in history and two more than Novak Djokovic and Roger Federer.

Nadal’s name will live on at Roland Garros

Commentators have said over the past two weeks that Nadal is the underrated member of the Big 3. But never has that felt less true. He came into Roland Garros with one Grand Slam under his belt, and didn’t look like a guy who had only recently recovered from a fractured rib. He outlasted a young upstart coached by his former coach and also outlasted his chief rival, Novak Djokovic, to make it into the semifinals. And we were constantly faced with his incredible stats at Roland Garros.

Only four men have taken a set off of Rafa in a #RolandGarros final:

But beyond all of that, you couldn’t go more than a few matches without hearing Nadal’s name invoked as an idol. Ruud idolized him growing up. Newly-crowned women’s champion Iga Swiatek did too, and so did Spain’s young tennis phenom, Carlos Alcaraz. Corentin Moutet, who lost to Nadal in the early rounds, loved Rafa so much that he wore his sleeveless French Open t-shirt to bed when he was young. Many players train at Nadal’s tennis academy in Spain. And others say they’ve modeled their game after his. Felix Auger-Aliassime, who gave Nadal one of his most serious challenges this tournament, hired Nadal’s uncle and former coach, Toni, to be his coach.

The French Open has been played since 1891, but Nadal’s name tattooed into the tournament’s DNA. It doesn’t matter if he’s underrated as a member of the Big 3, or if his record of 22 Grand Slam wins is beaten. At Roland Garros, no one has ever been as good as he is, and it’s probably safe to say that no one ever will be again. He will be discussed at every French Open until the tournament is no longer played. He’s the King of Clay, but at Roland Garros, he’s a god. He’s so good that he’s been immortalized in a statue at the Roland Garros complex while he’s still active and winning French Opens.

No matter what happens next, whether he keeps playing or retires or finds some different path, Nadal will always be the GOAT at Roland Garros. 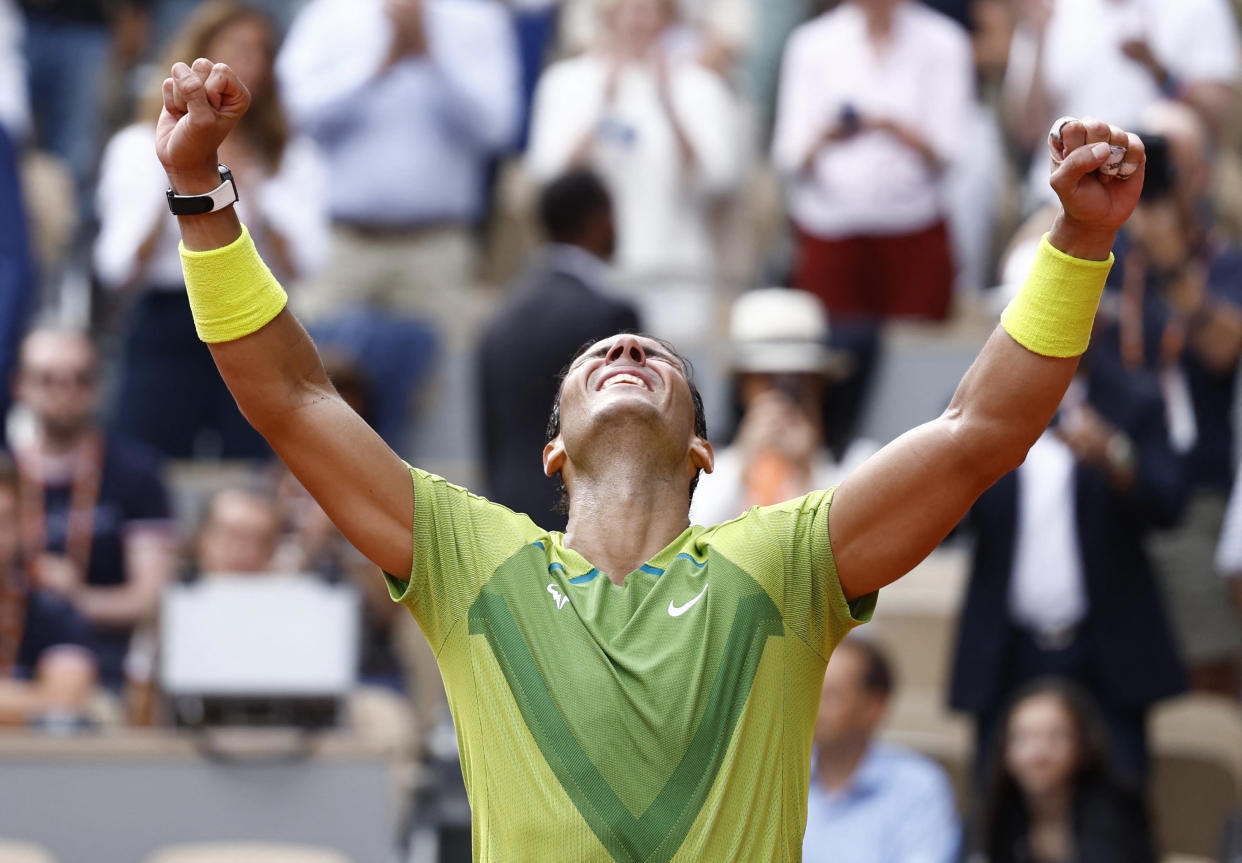