Home » World News » Ramshackle cowshed exposed to the elements is up for sale for £150,000

Ramshackle cowshed exposed to the elements is up for sale for £150,000

Now that’s a rustic property! Ramshackle cowshed which is completely exposed to the elements is up for sale for £150,000 due to permission to convert

A dilapidated cow shed without front walls is on the market for £150,000 after planners granted permission to transform it into a two-bedroom cottage close to a trendy resort.

The ramshackle barn has just one side wall and is on the edge of a farm in Chapel Amble, Cornwall, just five miles from Rock and is also a short drive from Polzeath surfing beach.

Despite its appearance, the property is structurally sound – but it will cost the new owner at least £100,000 to convert it to plan. 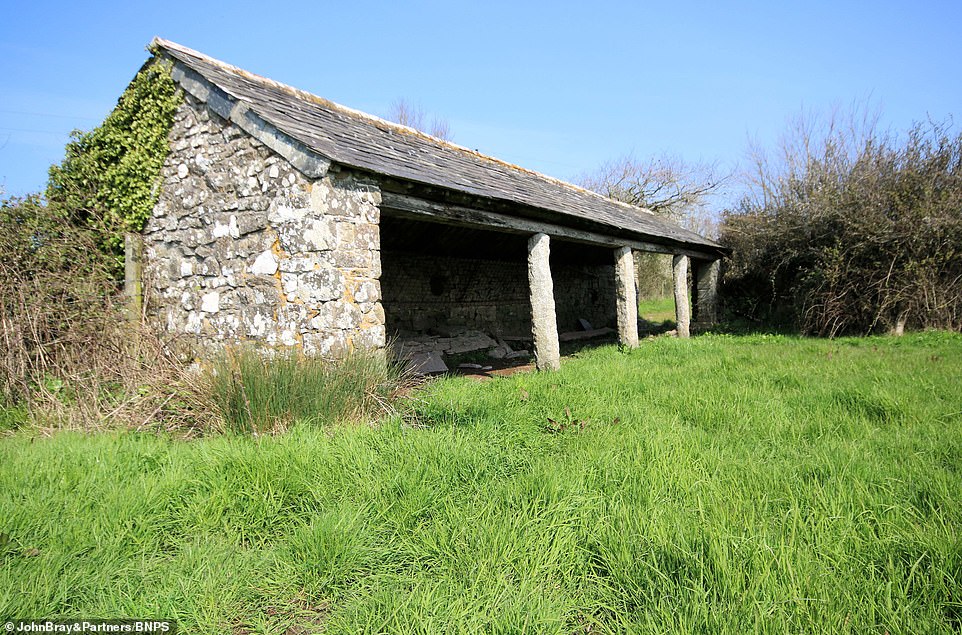 This barn close to the Cornish coast is on the market for £150,000 – despite having no front walls and just one on its side – because it is near a trendy surfing beach and resort as well as having permission to be converted into a two-bedroom house. But it will cost any buyer another £100,000 to realise the plans

This is how the ramshackle property in the village of Chapel Amble would look according to the plans that have been approved. It is close to the Rock resort as well as Polzeath surfing beach and offers a perfect location for anybody who wants to build a holiday home near the seaside

These projections have been approved, meaning that a cow shed that currently has just two walls could be transformed by a cash injection from a buyer with the dedication to develop it into a getaway home 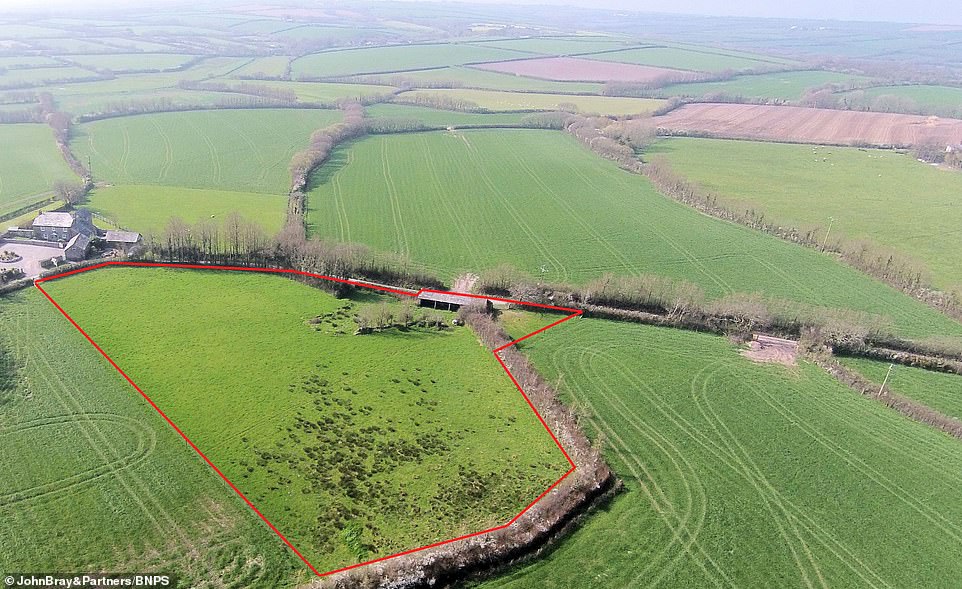 The red boundary above shows the land which comes with the £150,000 property. Despite looking like a rundown building, the cow shed has a sound structure that means the right buyer could develop it into a two-bedroom home with an open-plan living and kitchen area 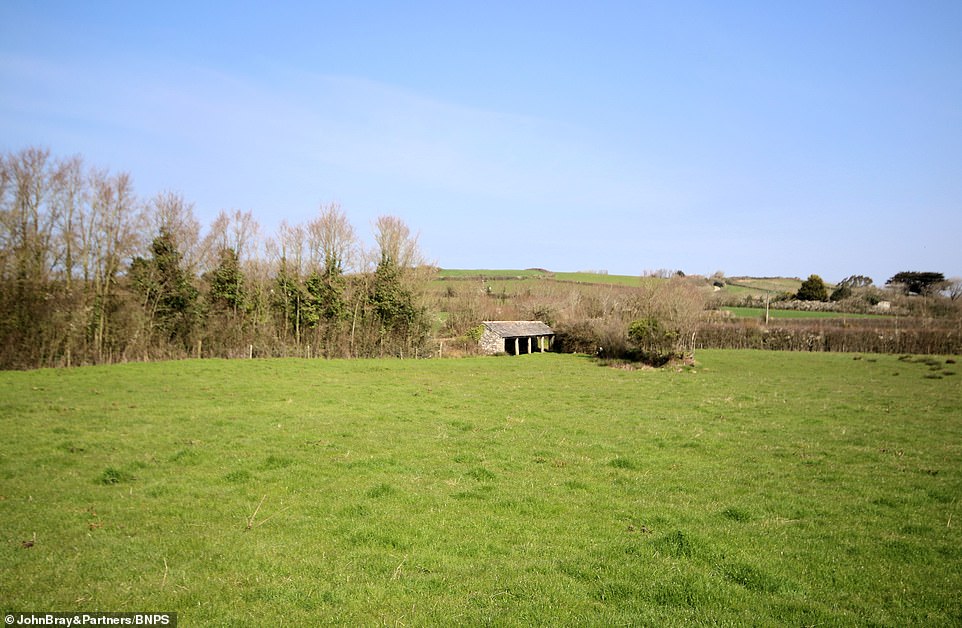 The cow shed (pictured) sits on the edge of a Cornish farm and has planning permission to be developed into a two-bedroom home close to the coast. If followed, the plans would mean an open plan dining area, kitchen and living room in a one-storey holiday home close to a prestigious surfing beach

Because of this, the project is likely to appeal to somebody wanting a holiday home by the Cornish coast or somebody looking to retire rather than a first time buyer.

The planning permission allows for a small side extension that will house one of the two bedrooms. Once converted the property will have an open plan living, kitchen and dining area and one bathroom.

‘What is currently there is an old cowshed that hasn’t been used for a long time and now looks a bit sorry for itself and needs some TLC. 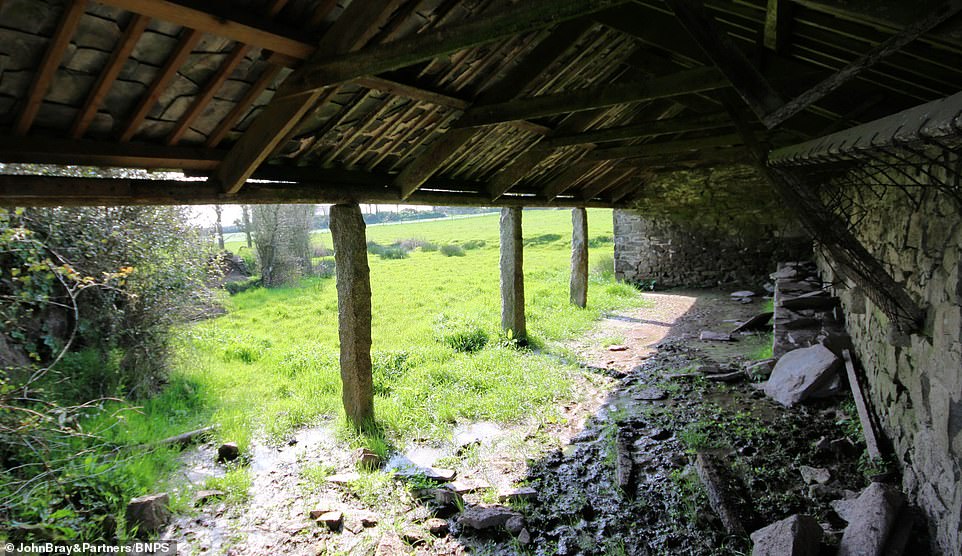 This is how the cow shed currently looks from the inside. Though it has no front wall, planners say it can be transformed into a two-bedroom holiday home. It would require a buyer to pump £100,000 into the renovation after purchasing the dilapidated cow shed for £150,000 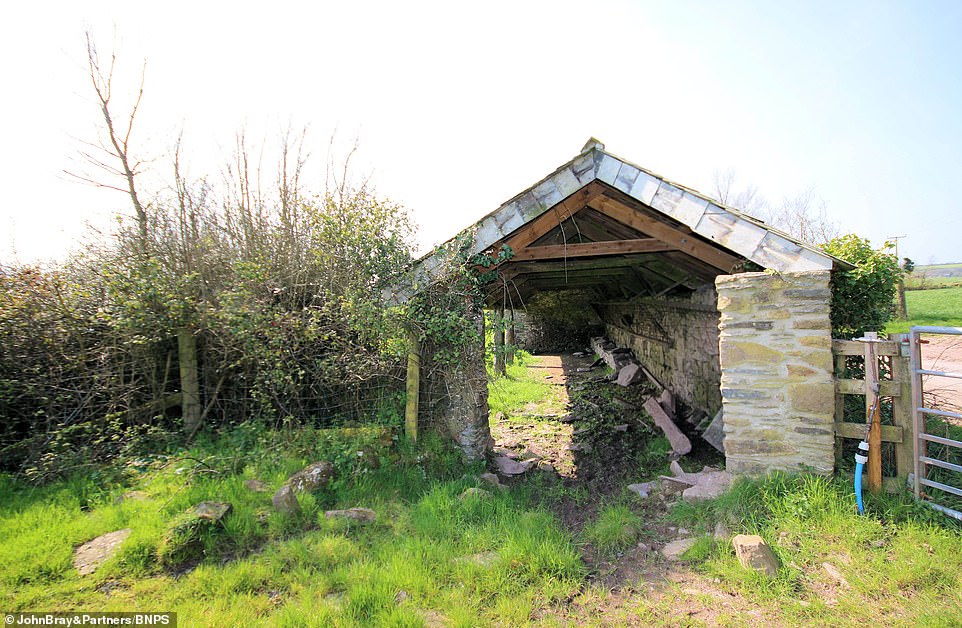 ‘But now that planning permission has been secured it can be turned a handsome two bedroom barn conversion with 1.8 acres of land.

‘If it is to be a permanent home then it is more likely it will be sold to someone looking to retire to the area rather than a first time buyer.

‘While the price of £150,000 might look affordable on paper, the reality is that it will cost a lot of money to do the work. But it could quite easily sell to someone wanting a second home in the area.

‘The property is on edge of a field but it does have its own access along a quiet lane but services like drainage and gas will need to be installed.’