Rio de Janeiro’s outgoing Mayor Marcelo Crivella was arrested Tuesday in connection with an alleged kickbacks scheme which pulled in at least $9.7million, yet another show of political turmoil in Brazil’s postcard city.

Seized materials, phone data, financial intelligence reports and testimony from collaborators ‘revealed the existence of a well-structured and complex criminal organization led by Crivella and that acted within City Hall since 2017,’ according to a statement from Rio’s public prosecutors’ office.

The evangelical bishop turned politician is scheduled to leave office on January 1 after losing a reelection bid in a landslide to his predecessor, Eduardo Paes. The defeat came in spite of backing from President Jair Bolsonaro, who draws wide support from evangelical congregations.

Crivella, 63, was an unlikely leader for the famously libertine city, but in 2016 he surfed a wave of conservative support prompted by a massive corruption investigation to election victory. In office, he has made headlines for breaking with tradition and distancing himself from the widely popular Carnival revelry. 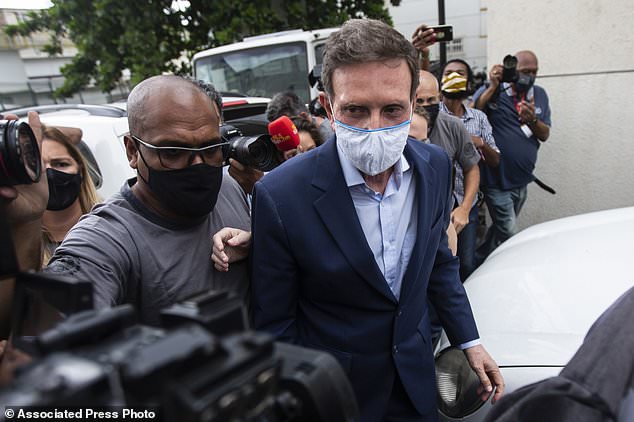 Rio de Janeiro Mayor Marcelo Crivella is escorted to a medical exam after his arrest at the city police headquarters in Rio de Janeiro, Brazil, on Tuesday. The 63-year-old is accused of corruption, defrauding public tenders, misappropriation of funds and money laundering 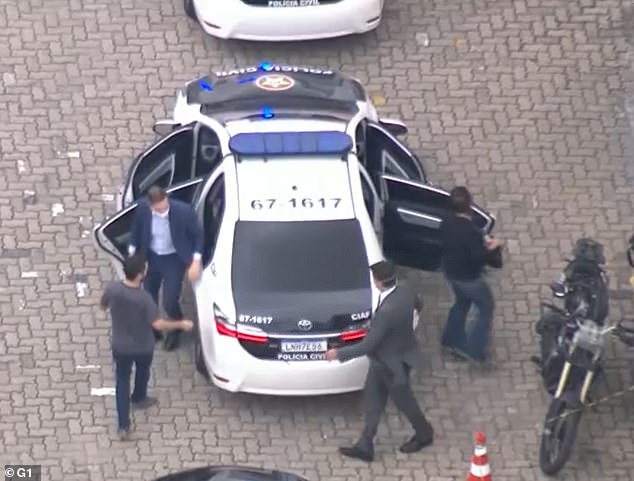 Rio de Janeiro’s mayor, Marcelo Crivella, steps out of a police car moments after he was arrested Tuesday. Prosecutors say they have evidence that shows that Crivella led a ‘well-structured and complex criminal organization … that acted within City Hall since 2017’

Police officers arrived at Crivella’s home at 6am, local TV footage showed. In September, they visited the mayor’s home and office to collect documents related to the probe.

Crivella, a married father-of-four, told reporters upon his arrival at the Rio police headquarters on Tuesday that his arrest is unfair. He also linked it to his willingness to fight corporate interests and lobbyists.

‘I am the mayor who most fought corruption in Rio de Janeiro,’ Crivella said as he walked into police headquarters, while calling his arrest a ‘political persecution.’

Investigations earlier this year showed Crivella maintained close links to Rafael Alves, a businessman who was also arrested on Tuesday.

Investigators alleged that Alves decided which companies would win contracts, and promised to award them in exchange for payments. Alves never held an official position, but his brother was the head of the city’s tourism office and he held frequent meetings with Crivella.

Jorge Felippe, the president of Rio’s city council, will assume office while Crivella is jailed. Deputy Mayor Fernando MacDowell died of a heart attack in 2018. 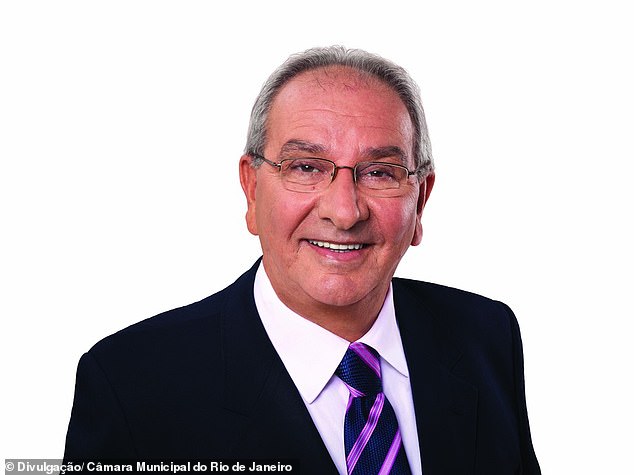 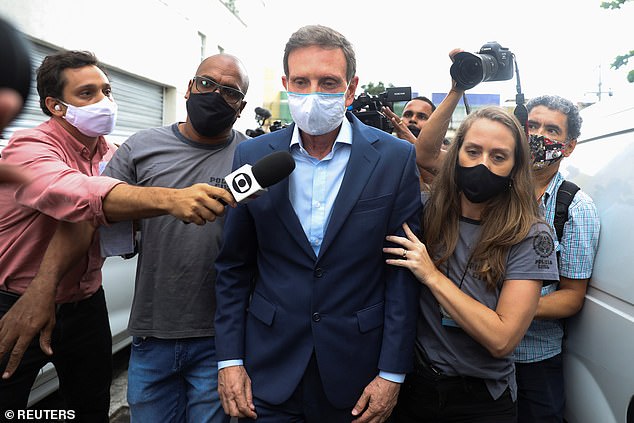 Mayor-elect Paes wrote on Twitter that he was in touch with Felippe and had asked him to mobilize municipal workers and ensure smooth transition. He called on health workers in the city’s network to continue aiding the population through the pandemic.

After the pandemic’s peak, Crivella introduced a step-by-step strategy to reopen the economy. Health experts at the time welcomed the gradual approach, but expressed fears he was implementing it too soon.

Earlier this month, the city’s seven-day average of confirmed cases surged to its highest level since June. It has since ebbed, but the city’s number of hospitalizations remains elevated, according to official data.

At one point during the pandemic, municipal employees were filmed loitering outside hospitals and derailing local media interviews with family members of COVID-19 patients.

Crivella repeatedly said during his reelection campaign that Paes, who was mayor when Rio hosted the 2016 Olympic Games, would be jailed if elected because of other investigations.

Crivella hasn’t faced any allegations over corruption in his administration’s pandemic response. However, Rio’s Governor Wilson Witzel has been suspended from office since August when one of Brazil’s top courts linked him to irregularities in health spending to fight COVID-19.

Witzel is also battling impeachment proceedings that could give his job to another person under investigation, Deputy Governor Cláudio Castro.

Corruption investigations in recent years have resulted in the jailing of five of Rio’s former governors. One of them remains behind bars.

END_OF_DOCUMENT_TOKEN_TO_BE_REPLACED

END_OF_DOCUMENT_TOKEN_TO_BE_REPLACED
Recent Posts
We and our partners use cookies on this site to improve our service, perform analytics, personalize advertising, measure advertising performance, and remember website preferences.Ok