Russia landed attack helicopters and troops at a sprawling air base in northern Syria vacated by US forces, the Russian Defence Ministry’s Zvezda TV channel said on Friday.

Armed Russian military police were shown in footage aired on Zvezda flying into the Syrian air base in northern Aleppo province near the border with Turkey and fanning out to secure the area.

The move comes after US President Donald Trump abruptly ordered the withdrawal of US troops from parts of Syria last month. 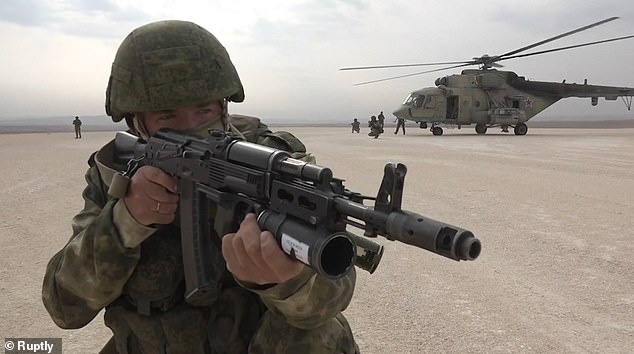 Russia landed attack helicopters and troops at a sprawling air base in northern Syria vacated by US forces. Pictured is a Russian military policeman standing 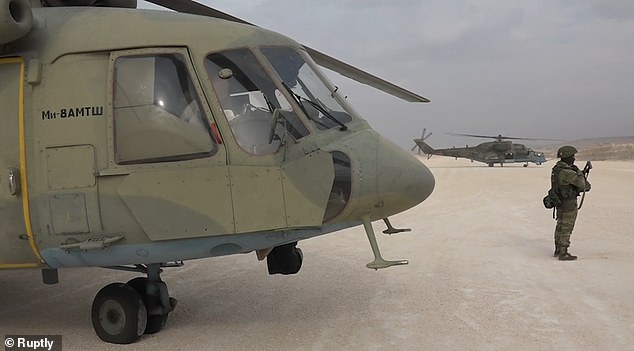 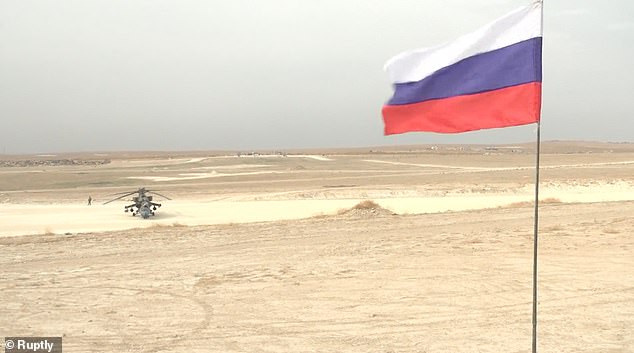 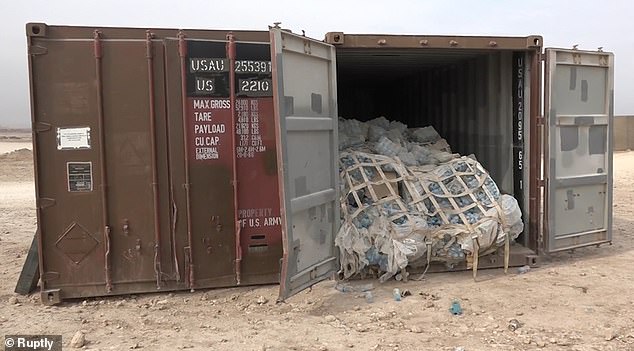 On Thursday, Zvezda said Russia had set up a helicopter base at an airport in the northeastern Syrian city of Qamishli

The facility will be used as a centre to distribute humanitarian aid for local residents and the military aerodrome is now controlled by Syrian government forces allied with Moscow, Zvezda said.

On Thursday, Zvezda said Russia had set up a helicopter base at an airport in the northeastern Syrian city of Qamishli, a move designed to increase Moscow’s control over events on the ground there.

Russia and Turkey are carrying out joint patrols along Syria’s border with Turkey as part of a deal struck between Russian President Vladimir Putin and his Turkish counterpart Tayyip Erdogan.

‘We entered the base and took the inner and external perimeter under control,’ a senior Russian military police inspector was quoted by Zvezda as saying.

‘Now sappers are looking and going through every building to make sure there aren’t some kind of explosive substances left behind or some kind of surprises here for us,’ he said.

Zvezda aired footage of US equipment such as medical supplies to treat sunburn that had been left behind as well as a gym and sleeping facilities. 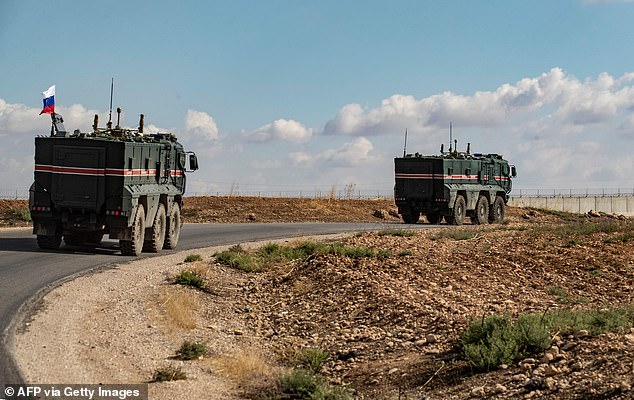 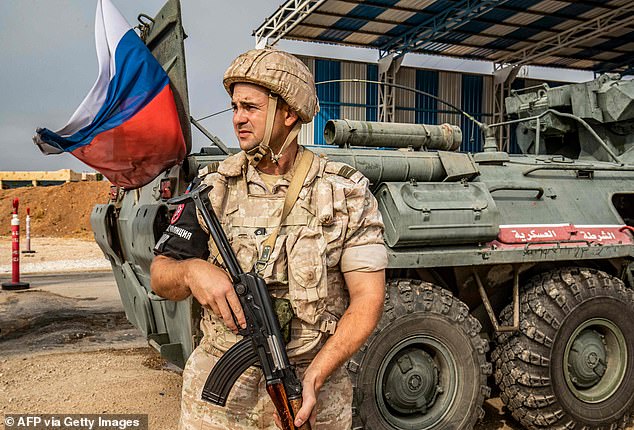 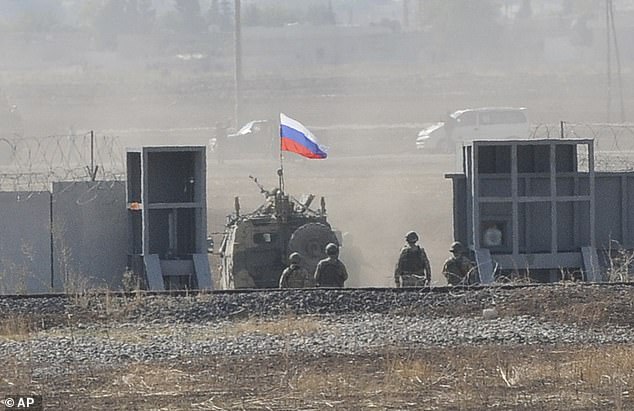 Russia has two permanent military facilities in Syria, an air base in Latakia province used for air strikes against forces opposing President Bashar al-Assad, and a naval facility at Tartus on the Mediterranean.

And a senior US coalition commander said Friday the partnership with Syrian Kurdish forces remains strong and focused on fighting the Islamic State group, despite an expanding Turkish incursion on areas of Kurdish control.

The US-Syrian Kurdish relationship, which dates back to 2014, was strained after President Donald Trump last month ordered American troops out of northern Syria, making way for a Turkish invasion of Kurdish-held towns and villages along a stretch of the border.

On Friday, reports said US forces completed their withdrawal from Kobani, a border region where the partnership against IS was cemented in 2014, and that Russians moved into to replace them.

The commander’s comments to the Associated Press reflect how troops on the ground have painted the mission in broad terms. They say they are staying to fight alongside Kurdish forces against the Islamic State group, as well as deny IS the oil fields as a source of revenue. They also have sought to show support for the Kurdish fighters.

Trump has described the mission as focused to secure oil fields and infrastructure. 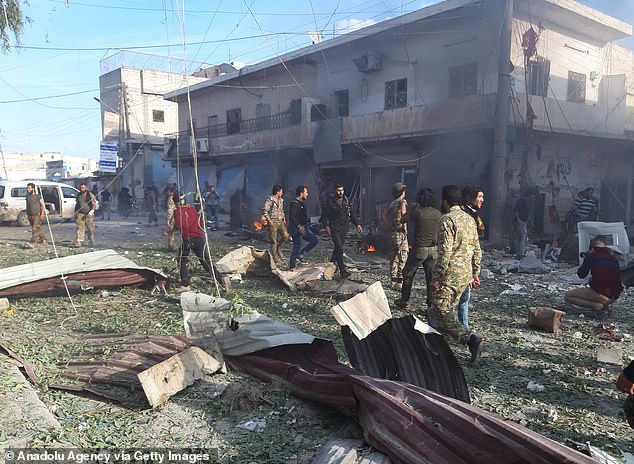 People inspect the scene of a bomb attack, killing at least 13 civilians, on a marketplace in Tal Abyad, Syria, on November 2 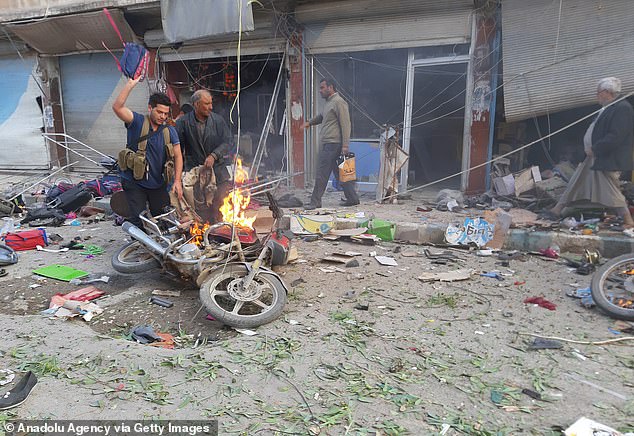 The attack injured more than 30 people, according to Turkish state media and the Syrian Observatory for Human Rights

Air Force Major General Eric T Hill said that Islamic State militants remain ‘a global threat’ and that the partnership with the Kurds and international action is still needed against it.

‘So, I don’t think the work is complete. We still have to pursue them and eliminate them everywhere we can find them,’ he told AP in a telephone interview from Baghdad.

Hill said IS militants are trying to regroup and find new financing, are still interacting with supporters on social media and continue to plot attacks through affiliates around the world.

Syria and Iraq, he said, remain ‘the center point for all Daesh operations,’ he added, using the Arabic acronym for IS. ‘This is where Daesh lives and where they coordinate their acts of terror.’

Kurdish and American forces are now operating in a region that is more complicated and crowded with troops since the Turks began their attack on northeast Syria in early October, aimed at pushing the Kurdish fighters away from the border.

Turkish forces have consolidated control over a stretch of the border running 70 miles (120 kilometers) wide and 20 miles (30 kilometers) deep into Syria. They have also kept up pressure outside that area, fighting with Kurdish forces on the edges.

Syrian government forces and their Russian allies have moved into other parts of the border under a Russian-Turkish deal.

US officials emphasize that they will not fight Turkey, a NATO ally.

But Hill underscored that the US was standing by the Kurdish-led Syrian Democratic Forces.

‘We have been working with (the SDF) for a long time and we continue to train and work with them now,’ Hill said. ‘So I think the partnership is strong.’

While IS has lost its territorial control in Iraq and Syria, its militants continue to wage insurgent attacks.

Hill said his troops continue to train, advise and equip the Kurdish-led forces. The SDF is guarding the oil fields while the U.S. is providing them help in doing so, he said.

Both sides have sought to show the U.S.-Kurdish partnership never waned. One American commando who works closely with the SDF said at no one point there was any drop in communication between the two sides, even as US forces were pulling out from border areas ahead of the Turkish invasion.

‘The friendship didn’t end to restart. It continues. We hope it also reaps political results to find a political solution,’ Mustafa Bali, an SDF spokesman, told AP earlier this week.

Over the last five years, the Kurdish-led forces have grown to between 40,000 to 60,000, including Arab fighters. The US has provided them training, ammunition and tactical vehicles but no heavy weapons. In the campaign against IS, the SDF have lost 11,000 fighters.

Protecting the oil from IS can fit under the legal authority that the U.S. first used to go into Syria to fight the militants. That was based on Congress’ 2001 and 2002 Authorizations for Use of Military Force that said US troops can use all necessary force against those involved in the September 11 attacks and to prevent any future acts of international terrorism.

But the oil fields may more immediately be under threat from the Syrian government, backed by Russia and Iran. The US troops are not legally mandated to fight state actors fighting for oil on sovereign soil but can only engage in self-defense.

Hill didn’t address this issue but said his forces are ‘prepared for all scenarios.’

On Friday, reports from a war monitor and a Kurdish news agency said US troops completed their withdrawal from their last position in the Kobani region, an air base known as the Kobani Landing Zone.

Russian military police deployed in the base, the Syrian Observatory for Human Rights said. Video aired by the Kurdistan 24 news agency showed a Russian flag hoisted at the site.

US Secretary of Defense Mark Esper told reporters earlier this week that the withdrawal from Kobani would take a week or so.

Kobani was a scene of the first major battle to drive out IS in 2014, making it a symbol of US-Kurdish cooperation against the militants. During the invasion, Turkish officials have threatened to move in on Kobani, which would allow Turkey to link up its territories it holds to the west with newly captured areas to the east.

Meanwhile, Syrian President Bashar Assad repeated warnings that the American presence in Syria will lead to armed ‘resistance’ that ‘will exact losses among the Americans, and consequently force them to leave.’

Speaking with Russia24 TV and Rossiya Segodnya news agency, Assad said Americans should remember the wars in Iraq and Afghanistan and that ‘Syria will not be an exception.’

He also criticized Kurdish groups seeking to set up an autonomous region inside Syria. ‘We shall never accept any separatist propositions under any circumstances,’ he said.

In northwestern Syria, an airstrike on the village of Bara in Idlib province killed five people and wounded several others, according to the Observatory and the Syrian Civil Defense, also known as White Helmets. The dead included three children who were brothers, the Observatory said.

Idlib, the last major rebel stronghold in Syria, is dominated by members of al-Qaida-linked Hayat Tahrir al-Sham. A cease-fire stopped the government offensive on Idlib at the end of August but in recent days, opposition activists have reported shelling and airstrikes in the area.

END_OF_DOCUMENT_TOKEN_TO_BE_REPLACED

END_OF_DOCUMENT_TOKEN_TO_BE_REPLACED
Recent Posts
We and our partners use cookies on this site to improve our service, perform analytics, personalize advertising, measure advertising performance, and remember website preferences.Ok