Home » World News » Russia will step up strikes on Ukrainian civilians this week, US warns

Russia will step up strikes on Ukrainian civilians this week, US warns

Russia’s independence day strike plot for Ukraine: US warns Putin will step up strikes on civilian targets as Kyiv celebrates breaking away from Soviet Union

Russia is preparing to step up its attacks on civilian and government targets in Ukraine, the US has warned.

Americans still living in Ukraine have been warned to leave while the US embassy in Kyiv issued information on how to survive a missile strike.

The warning was issued just hours before Ukraine celebrates its Independence Day on August 24, marking 31 years since it split from the Soviet Union.

President Zelensky has previously warned that Russia is plotting ‘something particularly ugly’ to coincide with the national holiday, without specifying what.

It comes off the back of days of heavy bombardment in Kharkiv, which experienced one of its deadliest nights of the war so far last week.

A large warehouse in the city was on fire Tuesday morning, amid conflicting information about whether a Russian missile strike was to blame. 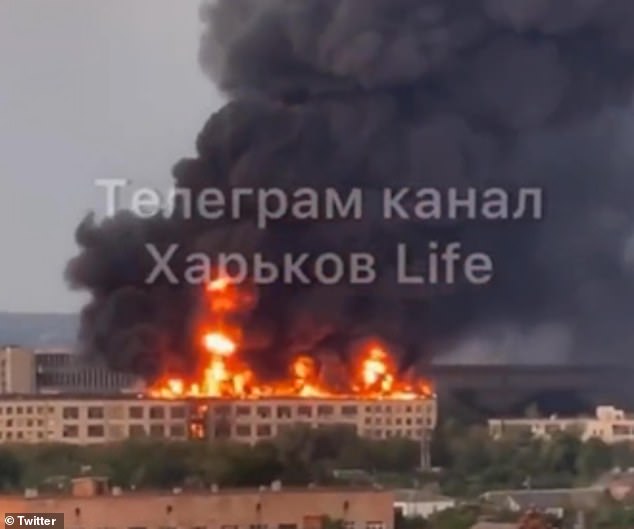 A warehouse burns in Kharkiv, Ukraine’s second-largest city which sits close to the Russian border, on Tuesday amid conflicting reports about a rocket strike 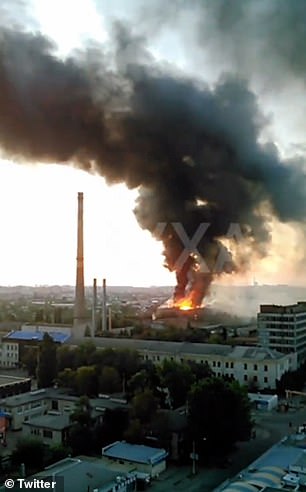 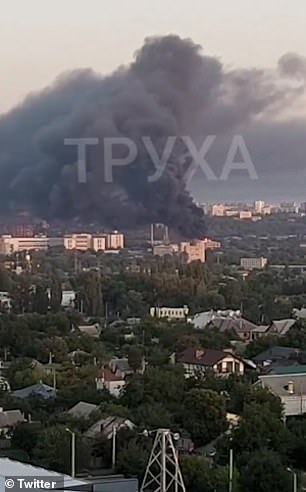 Meanwhile, independent analysts have warned Russia is massing missiles in Belarus for what could be a ‘massive attack’ on Ukraine.

The Belarusian Hajun group said last week that missiles are being gathered at Zyabrovka airfield in the south of the country, putting the city of Chernihiv within easy range. Kyiv could also be within range, depending on the missile type.

And concerns are also mounting around the Zaporizhzhia nuclear power plant in southern Ukraine, with multiple explosions reported in the region in recent weeks with Kyiv accusing Russia of planning a ‘provocation’ there.

However, the US stressed Monday that its warning about Russian strikes did not specifically cover the power station. 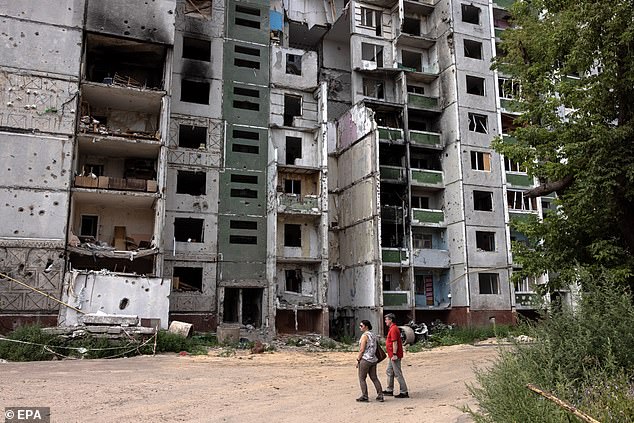 People walk past a destroyed apartment block in the Ukrainian city of Chernihiv, amid warnings that Russia is massing missiles at a nearby airbase in Belarus 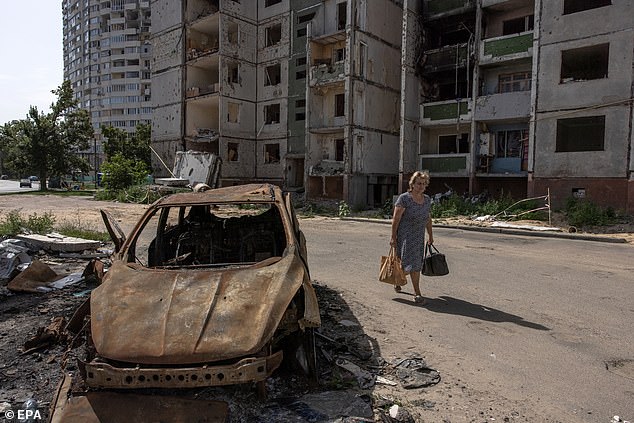 A woman walks past a burned-out car and blown-up apartment block in Chernihiv, which was the scene of heavy fighting earlier in the war 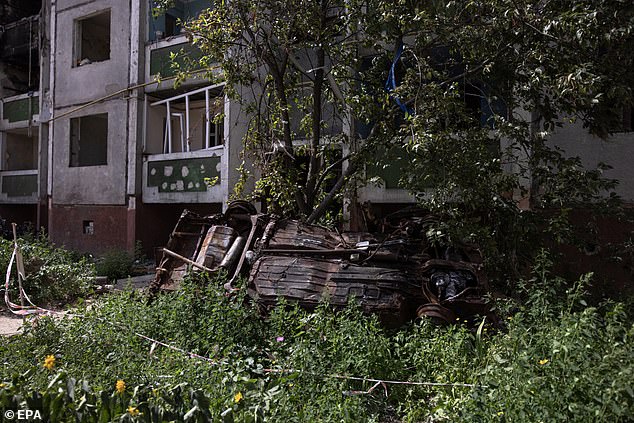 President Zelensky has warned Russia could be plotting ‘something particularly nasty’ to coincide withindependence day, amid fears cities could be targeted (Chernihiv, pictured)

As part of the alert, the US embassy in Kyiv told citizens: ‘If you hear a loud explosion or if sirens are activated, immediately seek cover.

‘If in a home or a building, go to the lowest level of the structure with the fewest exterior walls, windows, and openings; close any doors and sit near an interior wall, away from any windows or openings.’

Ukraine’s independence day marks the anniversary of the newly-formed country issuing its Declaration of Independence from the Soviet Union on August 24, 1991.

Vladimir Putin is seeking to undo that history with his war, calling Ukrainian statehood a ‘mistake’ that he is determined to correct.

Independence day also happens to mark six months since Putin ordered his armed forces into Ukraine to conduct what he called a ‘special military operation’.

The aim, according to American intelligence and leaked information from inside Russia, was to quickly topple the Zelensky government and install a puppet regime that would have been loyal to Moscow.

Putin would then have declared the end of American liberal world order and the dawn of a ‘multi-polar’ society in which Moscow and Washington held equal sway.

But events played out differently. The Russian military was forced to abandon its offensive on Kyiv after huge ‘death convoys’ of tanks and trucks got bogged down and then picked off by Ukrainian defenders. 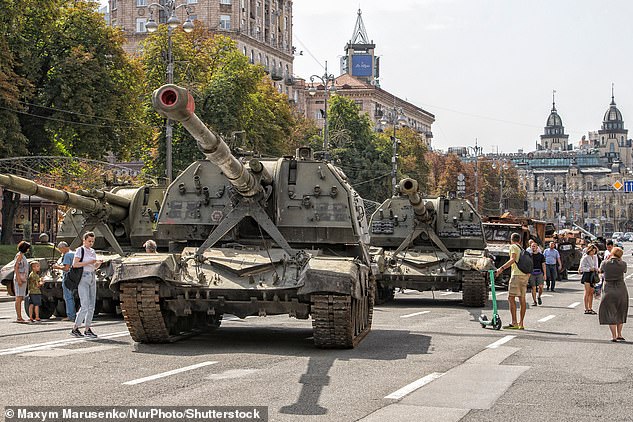 Destroyed Russian tanks are displayed in central Kyiv, ahead of celebrations to mark independence day which coincide with six months since the war started 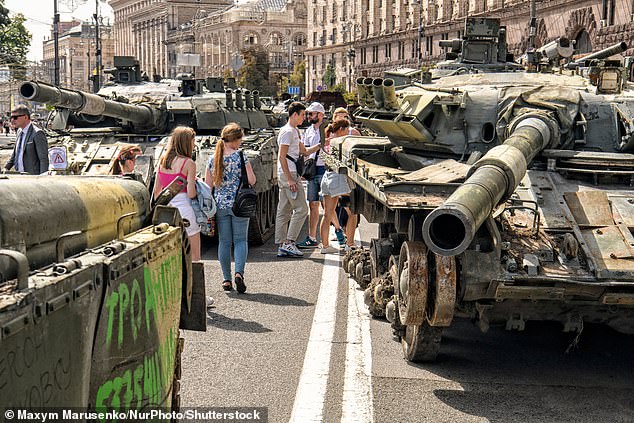 Putin’s generals then pivoted to the Donbas – a region of Ukraine’s east with a sizable minority of ethnic Russians – and announced their new mission was to seize it.

The attack on Kyiv, they cynically suggested, had only been a distraction to draw Ukrainian troops away while they focused on their true goal.

But even that offensive has fallen short. Russia has managed to capture most of Luhansk province – one half of the Donbas – but is struggling to make progress in neighbouring Donetsk.

Putin’s men have also captured the city of Mariupol, one of the largest in the region, but suffered heavy casualties and were forced to reduce it to rubble in the process.

Perhaps the biggest Russian successes on the battlefield have come in the south, where troops pouring out of Crimea have captured swathes of territory and established a so-called land bridge between Donbas and Crimea.

But with Russian casualties mounting and Putin’s forces spread thin, Kyiv’s commanders are now trying to reverse some of those gains.

Long-range artillery and sabotage attacks have destroyed bridges, taken out train lines, blow up ammo dumps and flattened airfields around the city of Kherson and Crimea – with Ukraine stating loudly that it intends to re-take both.

Talk of a large counter-attack involving troops and tanks has proven largely unfounded, but commanders have started briefing that their true aim is to wear the Russians down to the point they are forced to retreat.

Similar tactics led to the withdrawal from Kyiv early in the war, and the decision to quit Snake Island – which Russia tried to play off as a ‘goodwill gesture’.