MOSCOW (Reuters) – Three of Russia’s leading newspapers took the unusual step on Monday of publishing identical front page headlines to protest over what they suspect is the framing of an investigative journalist on drug charges. 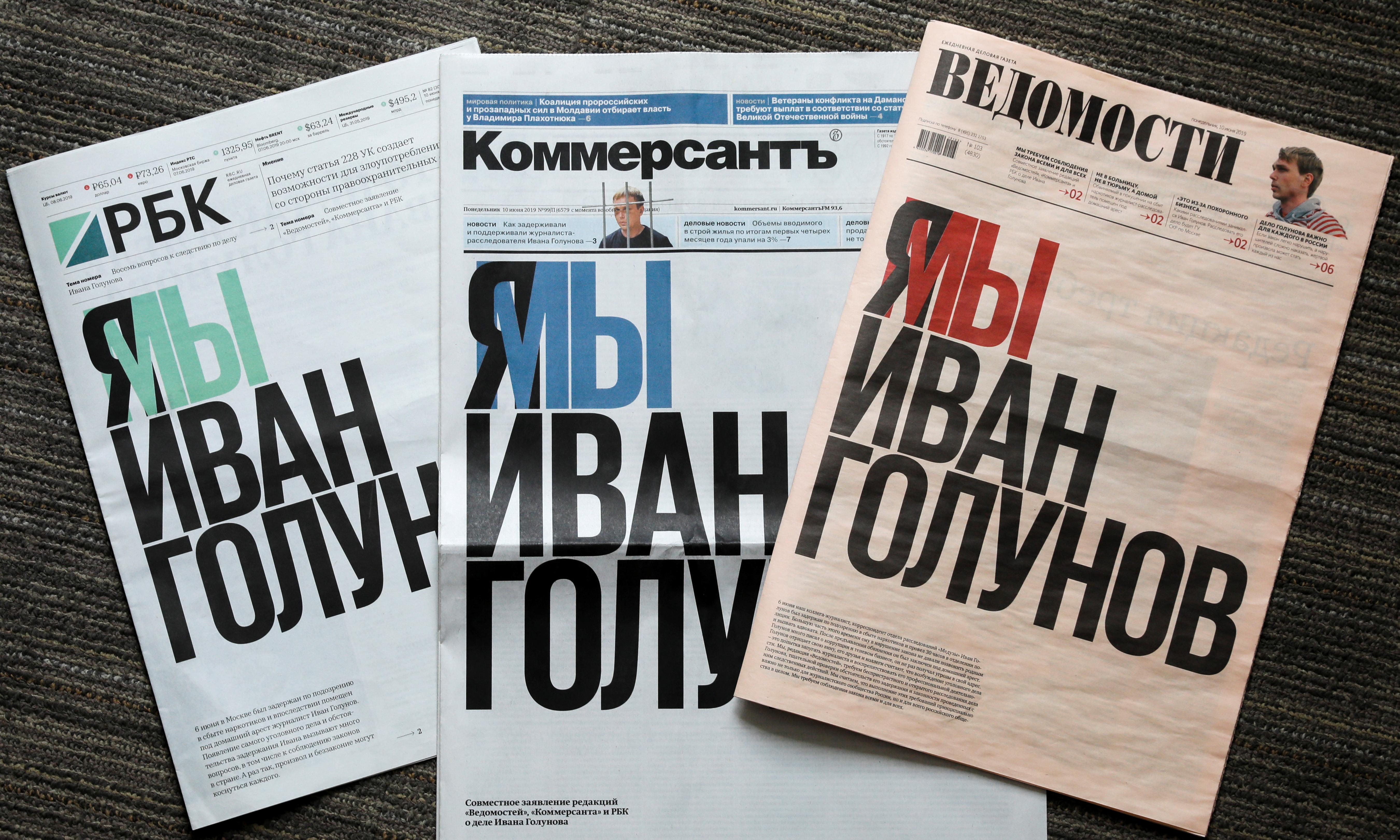 Ivan Golunov, a 36-year-old journalist known for exposing corruption among Moscow city officials, was detained by police on Thursday and accused of serious drug offences which he denies.

Russian journalists critical of authorities have led a dangerous existence since the 1990s – sometimes threatened, physically attacked, and even murdered for their work.

But the crude way supporters say Golunov was set up has triggered an unusual show of media unity and an uncharacteristically swift response from authorities nervous about social unrest at a time when President Vladimir Putin already faces disquiet over living standards.

Police say they found drugs in Golunov’s rucksack, and he faces between 10 and 20 years in jail if found guilty.

Fellow journalists and members of Russia’s cultural elite suspect a fit-up by corrupt officials wanting to silence him. Golunov’s lawyer says he was assaulted and punched by police officers, something they deny.

The three leading daily newspapers – Vedomosti, Kommersant and RBK — all carried the same headline on Monday in a rare show of solidarity: “I am/We are Ivan Golunov.”

In a joint statement, they said evidence against Golunov was shaky, cast doubt over the legality of his detention, and demanded a review of police behavior.

“We expect law enforcement agencies to scrupulously observe the law and demand maximum openness when it comes to the investigation,” the statement said. “We demand the law be respected by everyone and for everyone.”

Journalists protested outside Moscow’s police headquarters on Friday and over the weekend to demand the case be dropped.

Celebrities and even some high-profile journalists at state media have spoken out for Golunov, criticizing either the accusations against him or the harsh manner of his detention.

In what some supporters saw as a small victory, a court on Saturday rejected a request to hold Golunov in a pre-trial detention facility and ordered instead that he be held under house arrest for two months while he is investigated.

It is unusual, given the gravity of the accusations, for a court to agree to house arrest and the decision was seen by supporters as a sign that authorities were nervous at the outcry.

State TV on Sunday broadcast a program in which police operatives defended their evidence, but the same program also said that the police’s actions needed to be checked.

The Kremlin said on Monday that the way Golunov’s case had been handled raised many questions.

“We are closely following how this case unfolds and all its nuances,” Kremlin spokesman Dmitry Peskov said.