A second supermarket giant is cutting fuel prices following a reduction in wholesale costs – just in time for the second national lockdown.

RAC fuel spokesman Simon Williams said the cuts were reminiscent of March, with prices falling ‘just at the point when we’re all driving less as a result of a coronavirus lockdown’. 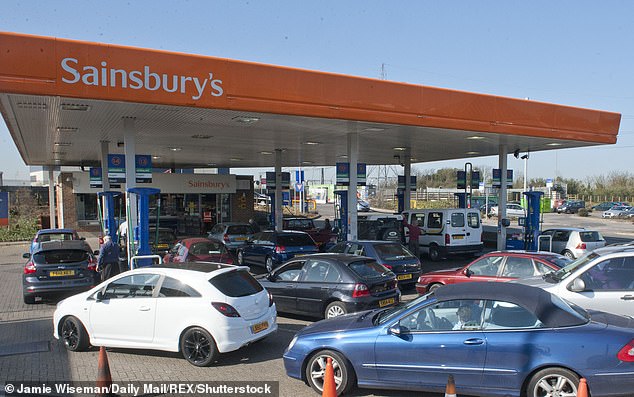 But he is not expecting prices to go as low as during the first lockdown, when a litre of petrol dropped below £1 with some retailers.

He added: ‘There is perhaps a cruel irony for motorists here in that the route to cheaper prices is cheaper oil, yet the main reason the oil price is lower is because so many of us across the world aren’t travelling.’

At the beginning of the week the average price of petrol at UK forecourts was £1.13 per litre, with diesel at £1.18 per litre, according to Government data.

This followed a similar move by Asda on Tuesday, who reduced prices at 322 filling stations across the UK.

RAC analysis published on Wednesday found that average UK fuel prices were ‘virtually static’ in October despite wholesale costs for petrol and diesel falling by 5p per litre.

What does a second lockdown in England mean for motorists?

Read our full guide here to find out what impact the lockdown from 5 November to 2 December will have on rules around driving your car, having it serviced or MOT tested or even buying a new one.

It also claimed that diesel has been ‘over-priced for nearly two months’, with average prices dropping by just a fraction of a penny in October.

Mr Williams said: ‘We’re concerned some retailers may choose to only cut by a few pence, or not at all, which would be bad news for drivers, especially as we don’t anticipate the roads will be as quiet as during the first lockdown.’

Fuel price experts have told us a repeat crash in fuel prices, which saw petrol drop below £1-a-litre for the first time in four years during the first coronavirus lockdown, is unlikely.

This was caused by a price war between Saudi Arabia and Russia when the latter refused to reduce oil production, which saw oil prices fall by 65 per cent.

Oversupply came at a time when demand hit an all-time low, with road traffic levels dropping by as much as 80 per cent in the UK as people were ordered to stay home.

END_OF_DOCUMENT_TOKEN_TO_BE_REPLACED

END_OF_DOCUMENT_TOKEN_TO_BE_REPLACED
Recent Posts
We and our partners use cookies on this site to improve our service, perform analytics, personalize advertising, measure advertising performance, and remember website preferences.Ok