It was a walk that would have made Nini proud.

Murray Conallin hobbled onto the stage at the Sydney Cricket Ground in the midst of howling wind and a pandemic, after a 163-kilometre trek from Newcastle that had left him with “calves like rocks, hips like my grandma’s and blisters with their own postcodes”. 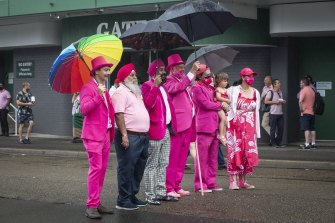 Colourful fans at the Sydney Cricket Ground for the 4th Ashes Test between Australia and England. Credit:Jessica Hromas

It seemed a fitting tribute to his late wife Nini Vascotto, a woman who, in the fight of her life with terminal breast cancer, managed to land more than a few punches.

Mr Conallin spoke poignantly as he shared his memories of Nini at a fundraising high tea to mark the 14th annual Jane McGrath day at the Pink Test match on Friday.

He remembered his wife as someone determined to live her life to the fullest despite her diagnosis – so much so that she went missing in action for a scheduled blood transfusion so she could watch the racehorse named after her thunder home in first place at Randwick.

“Nini was the boss of cancer. She never let it dictate how she lived her life.

“That’s my number one rule of fighting cancer. Fight back. Go on holiday. Buy that YSL bag.”

In the 10 years after Ms Vascotto was diagnosed at the age of 33, the pair got married and travelled the world. The only dream of Nini’s that went unfulfilled was having children.

But it was when Mr Conallin went to describe the contribution of their breast care nurse, Helen Conlon, that his voice choked.

A shared embrace between the pair was enough to bring seasoned McGrath Foundation directors to tears.

The foundation, which celebrates the legacy of Jane McGrath, the late wife of former Test fast bowler Glenn McGrath, raises money for nurses like Ms Conlon to support individuals and families.

“Without Helen our journey would have been so much harder,” Mr Conallin said.

At the high tea, Prime Minister Scott Morrison pledged $40 million to help the foundation achieve its goal of another 79 breast cancer care nurses by 2025.

Despite rainy conditions and rising COVID-19 cases, the crowd at the SCG lost none of their fervour for the cause on Friday. 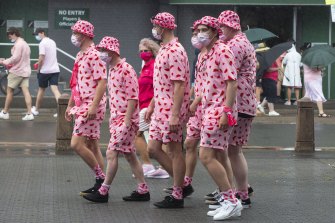 Pink, pink and more pink at the SCG. Credit:Jessica Hromas

In the high tea tent the sartorial choices were more refined, with floral dresses and pink fedoras the order of the day.

Rob McCarron is among a group from Gunnedah and Narrabri, in the state’s north, who have attended the high tea every year for the last decade in candy-pink suits.

“This is the first year we’re wearing top hats,” he said.

Another veteran of the day is Gurnam Singh, who has been donning a pink suit and turban for the event for the past 11 years. 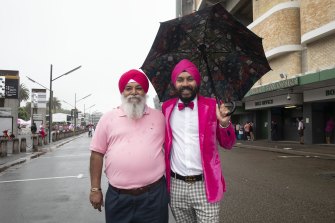 A special occasion for H.S Rathor and his son Gurnam Singh at the SCG Test match. Credit:Jessica Hromas

This year he brought along his father to support the cause.

“Pink day is very emotional for me because my mum died from cancer,” he said.

“No matter if it’s 30 degrees, sun hail or storm, we are here to celebrate.”

Holly Masters, the chief executive of the foundation, praised the droves of fans who got behind the cause despite the challenges of the pandemic.

“It’s just unbelievable to walk into the SCG on a day like today … the passion and the energy,” she said.

This year the foundation built a virtual stadium with 240,000 seats to allow people in isolation and overseas to contribute.

“What I love about today is that pink is an attitude, it’s about hope, it’s about optimism, it’s about community and I think during the pandemic we’ve seen a real return to community,” Ms Masters said.

Bec Jenkins, 30, who was diagnosed with breast cancer during the pandemic and is still undergoing treatment, said the support of a McGrath breast care nurse had been invaluable, especially when restrictions meant she was unable to be accompanied to treatment by family or friends.

“It’s great to see everybody walking in wearing their pink, coming out to support this cause is a pretty big deal for people like us,” she said.