Scientists have revealed the deepest point on land in a new study which also showed some ice sheets in Antarctica glaciers have become more vulnerable to melting.

The deepest point was found to be under the Denman Glacier in East Antarctica and was discovered by Glaciologists at the University of California, Irvine.

It was around two miles deep below sea level and contained no sea water.

According to the study, which took months of investigation, scientist found that the trough under the glacier went far deeper than they could have imagined. 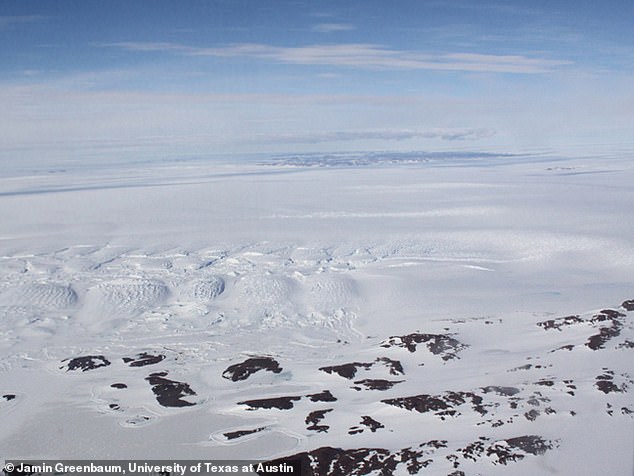 Scientists have found the deepest point on land under the Denman Glacier in East Antarctica. It was around two miles deep below sea level and contained no sea water

The trough, which measures 62 miles in length and is 12.4 miles wide is filled with ice which had been trying to flow from the interior of the ice sheet towards the coast.

According to CNN the new discovery was presented at the American Geophysical Union’s Fall Meeting which took place in San Francisco.

The project lead, Dr Mathieu Morlighem, said the biggest challenge about the project was the size of the Antarctica.

He added: ‘It’s bigger than the U.S. and Mexico combined.’

His team from the Department of Earth System Science used BedMachine technology to make the discovery, developing a new generation ice sheet model. 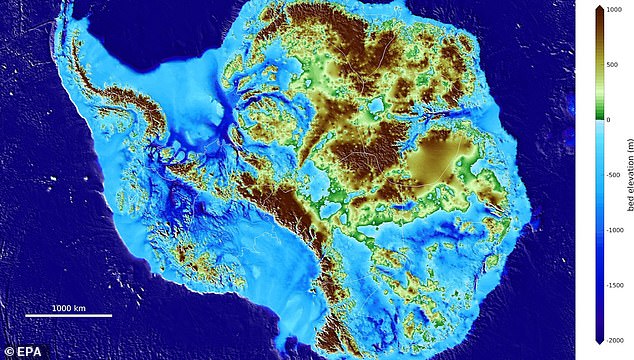 The British Antarctic Survey (BAS) released a photo of topographical map of Antarctica, revealing that the Denman Glacier was indentified by scientists as the deepest of continental Earth with the help of BedMachine

‘After months of investigation, we realised that it was not because we were missing important processes. It was because the bed topography under the ice was missing many important features such as troughs, ridges, valleys, etc,’

Applying the mapping technique they were able to discover a deep valley hidden underneath the ice sheet and said one surprise had been the ridges across the Transantarctic Mountains, Denman glacier.

He added that some other glaciers feeding the Ronne Ice Shelf were ‘more vulnerable than they had thought’.

Morlinghem added that climate change could impact the region and said scientists would now have to monitor the region carefully.

‘If its grounding line — where the ice starts to float — starts to retreat in this deep canyon, it could retreat rapidly due to a mechanism called Marine Ice Sheet Instability.’

He continued that glaciers that flow on beds that deepen inland are unstable, which could lead to the glacier having to retreat.

This could lead to rising sea levels, making it one of the most vulnerable sectors of East Antarctica, which is believed to hold more ice than the west.

This is while the study also found that major glaciers flowing through the Transantarctic Mountains could be protected by topographic ridges.

END_OF_DOCUMENT_TOKEN_TO_BE_REPLACED

The Canadian Hurricane Centre says hurricane Teddy could make landfall in  the Maritimes next week, though it remains unclear how intense the storm will be. The storm was churning northward in Caribbean today, with maximum wind speeds over 200 kilometres per hour. The potential tracks cited by centre show the

END_OF_DOCUMENT_TOKEN_TO_BE_REPLACED

Sets of 120,000-year-old footprints belonging to humans have been discovered in Saudi Arabia. The set of seven human footprints, found around an ancient dry lake in the northern region of Tabuk, are the earliest evidence of humans in the Arabian peninsula. Experts believe they are the footprints of at least

END_OF_DOCUMENT_TOKEN_TO_BE_REPLACED

Hello and welcome to Five Weeknight Dishes. We are still at home, and we are still cooking. Let’s acknowledge that it can be a slog. I’ve found that it helps a little when I make a recipe that brings with it some kind of small revelation or a beat of

END_OF_DOCUMENT_TOKEN_TO_BE_REPLACED
Recent Posts
We and our partners use cookies on this site to improve our service, perform analytics, personalize advertising, measure advertising performance, and remember website preferences.Ok