Scotland fans hit the pubs ahead of tonight's Euro 2020 clash

Scotland fans today prepared for one of the most important football matches in the country’s history, knowing that a win against Croatia tonight will see them qualify from the group stage of a major finals for the first time.

Supporters were seen enjoying the sunshine in Glasgow ahead of tonight’s Euro 2020 match at Hampden Park, where a victory will ensure they qualify for the second round at least as one of the four best third-placed teams.

Fans walked around the city wearing kilts and draped in flags, while kiosks were selling half-and-half scarves to mark the match which kicks off at 8pm – the same time as England v Czech Republic at Wembley in London.

Scotland manager Steve Clarke has urged the Tartan Army to turn up the noise from the first minute to the last at Hampden, with the stadium hosting a socially-distanced crowd of 12,000 fans for the final Group D match.

But they will have to do it without key young midfielder Billy Gilmour who is now in self isolation for ten days after testing positive for Covid-19. This has also left England footballers Mason Mount and Ben Chilwell in quarantine until next Monday, because they chatted in the Wembley tunnel for 15 minutes following their match last Friday.

The Scotland players were inspired by their travelling fans at Wembley as they secured a 0-0 draw against England to keep their chances of progression alive – and Clarke believes their vocal support will be crucial again. 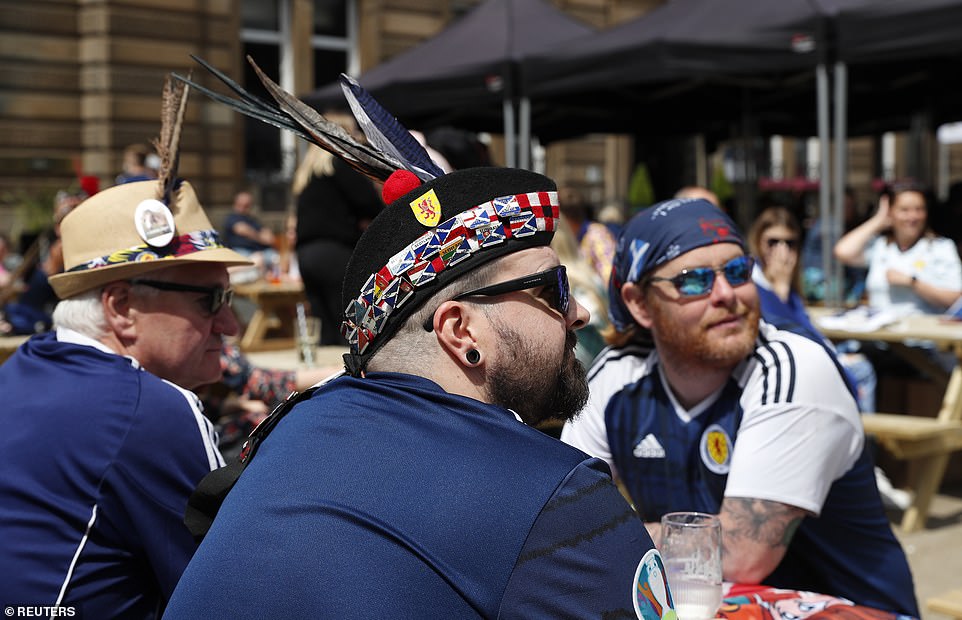 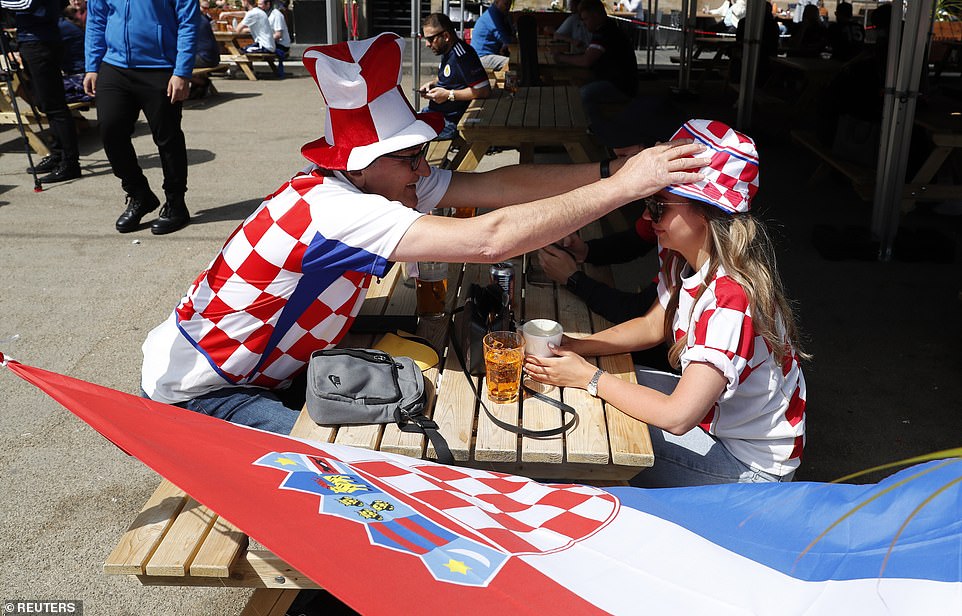 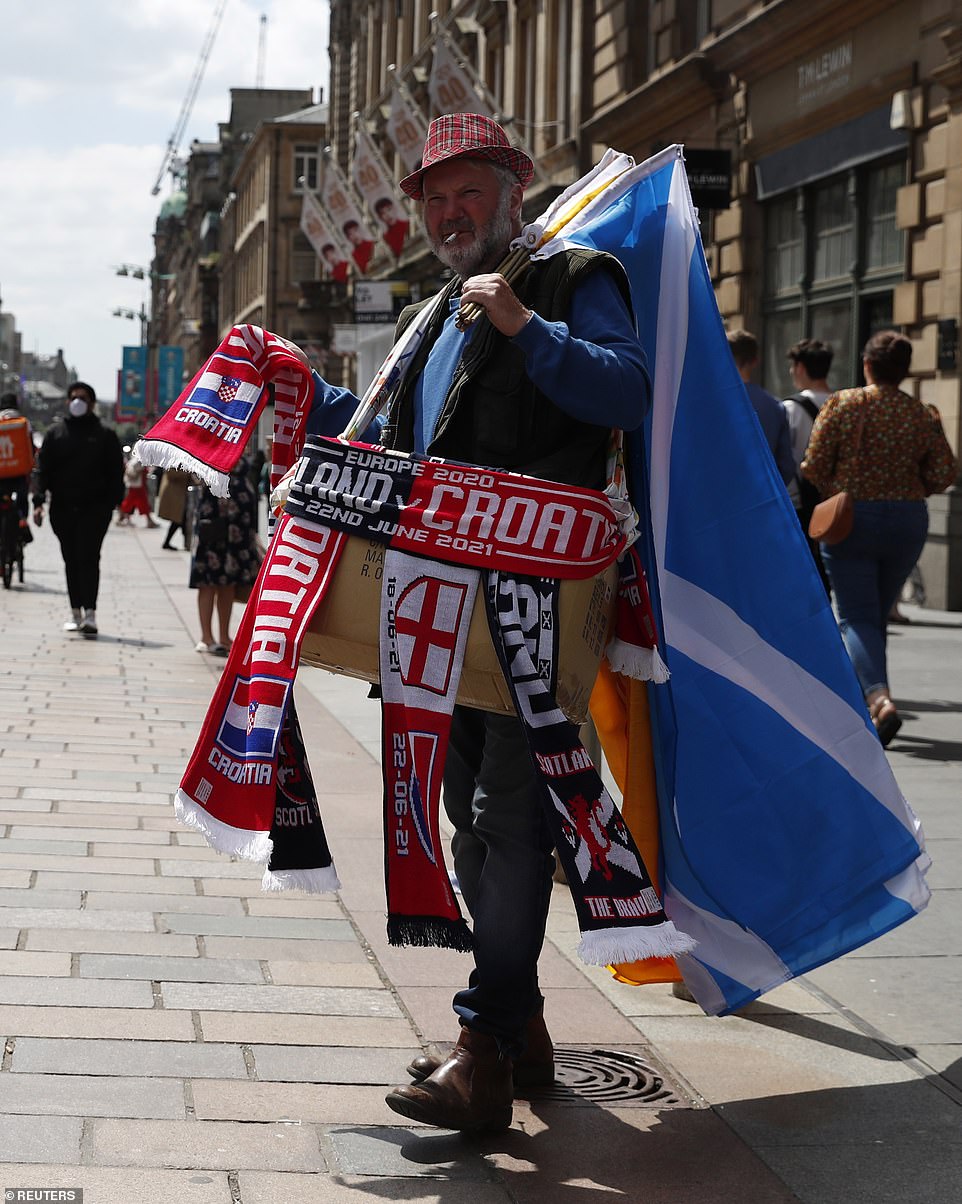 A merchandise seller is pictured in Glasgow ahead of the match tonight, selling scarves and flags to passers-by 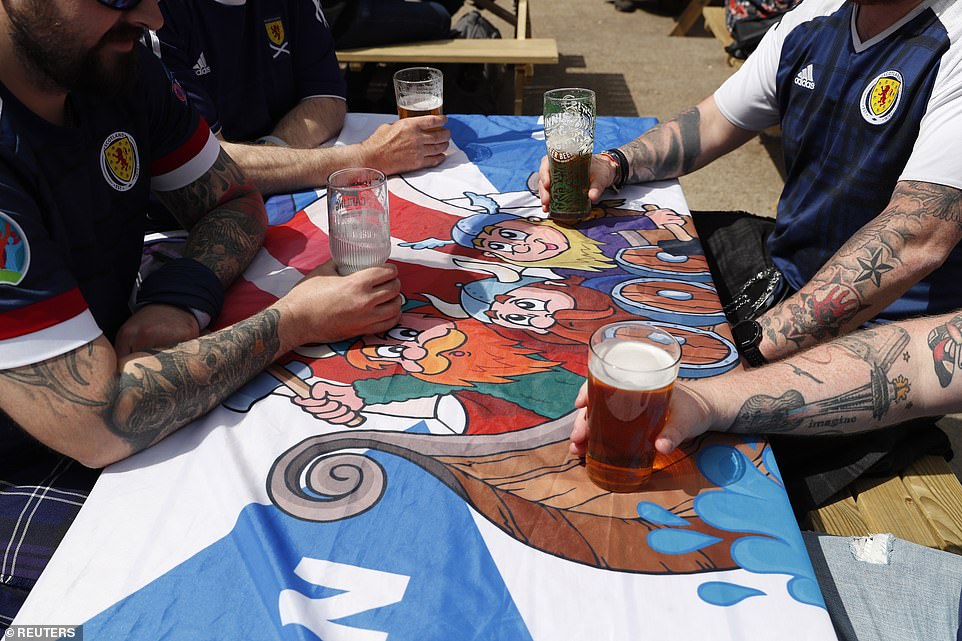 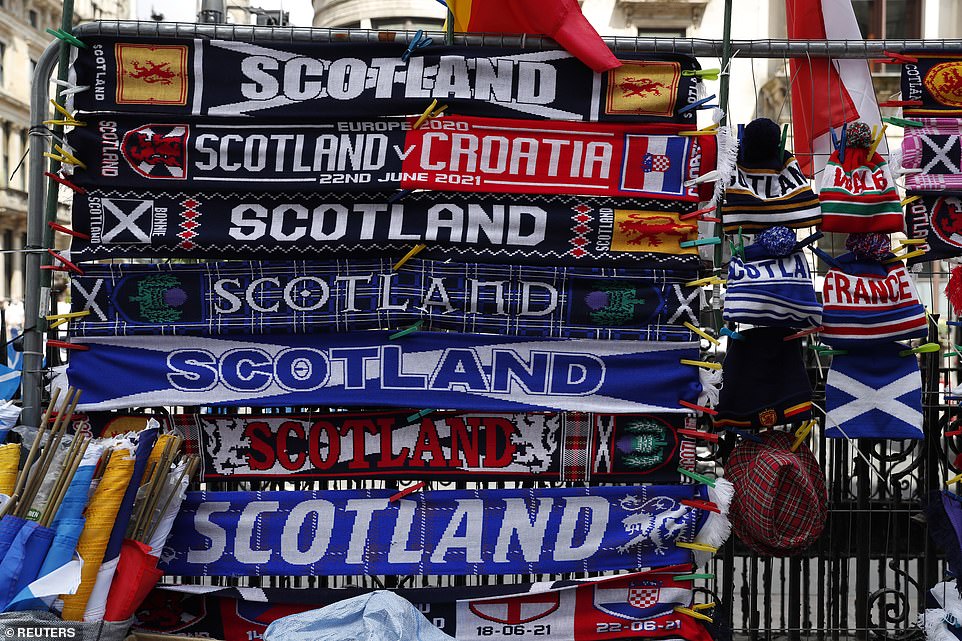 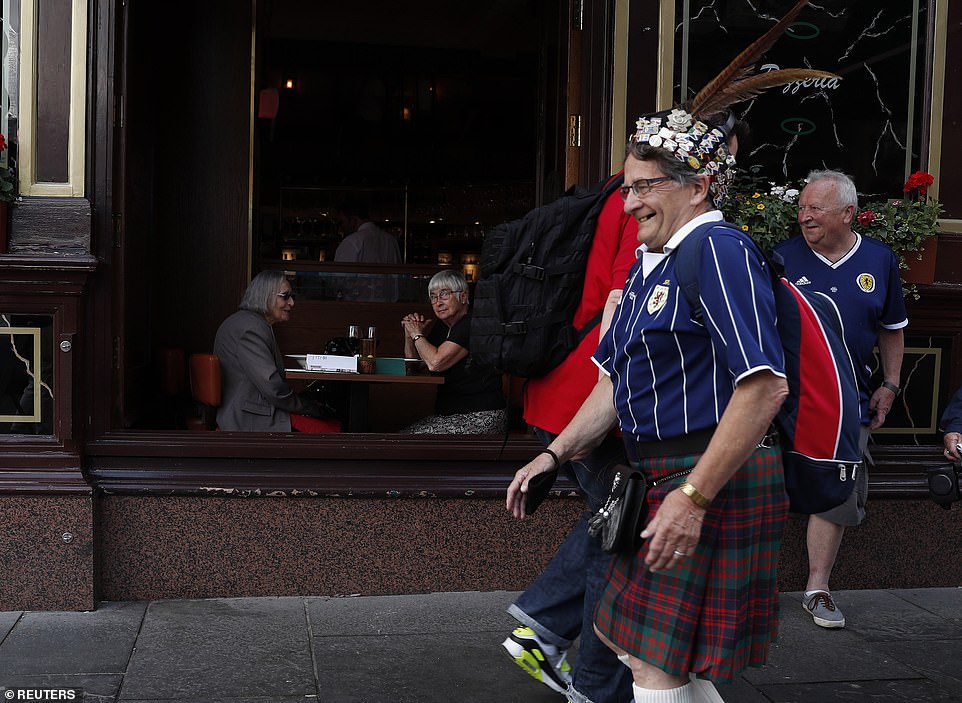 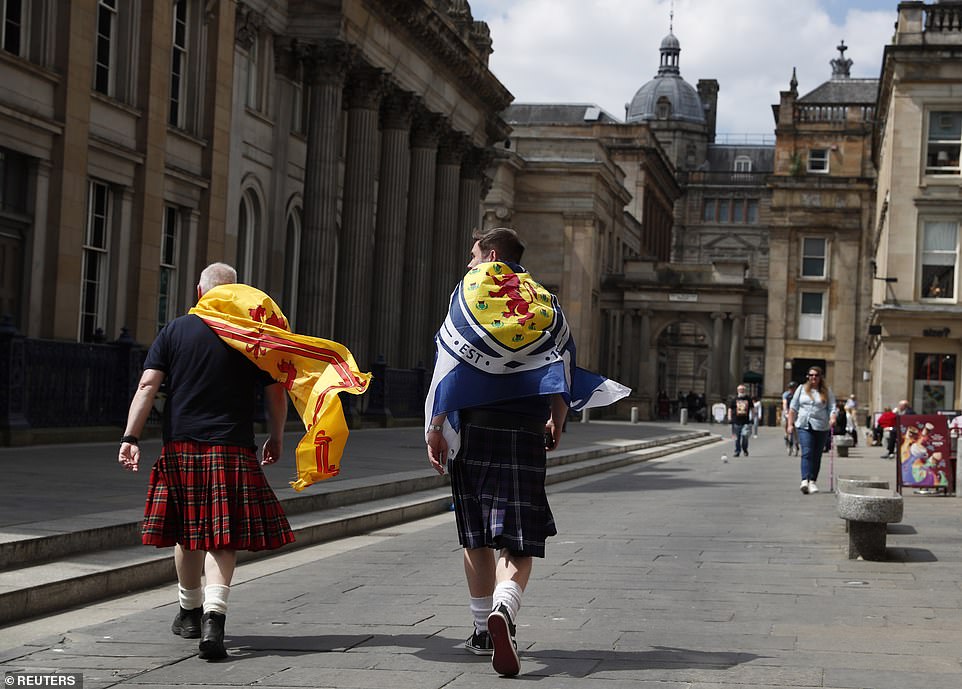 Speaking yesterday as Scotland bid to upset the odds against the World Cup runners-up Croatia, Clarke said: ‘If they can make half the noise that the 3,000 supporters did at Wembley then it will be a great atmosphere.

‘What I would say to the Tartan Army is we need your backing from the first minute to the 95th minute. We need you all the way.

Scotland take on Croatia in their final Euro 2020 Group D fixture tonight. Steve Clarke’s men have one point from two matches following a 2-0 defeat by the Czech Republic and a 0-0 draw against England. Here are some of the talking points ahead of the crucial match:

On the verge of history

Scotland have never qualified out of the group stage of a major finals, which includes eight World Cups and two European Championships, but victory will ensure they progress, at least as one of the four best third-placed teams. They could even leapfrog England into second if the Czechs win at Wembley and they overturn a three-goal deficit on their neighbours. If the Tartan Army are looking for an omen, Scotland won their previous two final Euro matches in 1992 and 1996 and have not lost to Croatia in five meetings.

Who will replace Billy Gilmour?

The Chelsea midfielder was named star man by Uefa following his first international start but he was brought crashing back to earth by a positive Covid-19 test. John Fleck, who had his own positive test before the tournament, would be a direct replacement. The Sheffield United player is yet to feature in Euro 2020. Scott McTominay could return to midfield but he performed better in the back three at Wembley and could help Scotland push forward better than another centre-back, such as Jack Hendry. John McGinn could revert to a more defensive role, which he filled against the Czech Republic, with options for the more advanced midfield role including Stuart Armstrong, Ryan Christie and David Turnbull.

Where are the Scotland goals coming from?

Scotland are the only team yet to score at Euro 2020. According to official tournament statistics, they have had 30 attempts on goal but only six have been on target while 18 have been blocked. Midfielder John McGinn has 10 international goals but no-one else in the squad comes close and, between them, strikers Lyndon Dykes, Che Adams and Kevin Nisbet have only five goals in 25 caps.

Are Croatia past their best?

The 2018 World Cup finalists also go into the game with one point from a 1-1 draw against Czech Republic, before which they looked insipid in a 1-0 defeat against England. From the side which shone in Russia, midfielder Ivan Rakitic, forward Mario Mandzukic and goalkeeper Danijel Subasic have stepped away from the international scene. Croatia will lean on 35-year-old Real Madrid midfielder Luka Modric more than ever but they still have quality in players such as Inter Milan winger Ivan Perisic, defender Sime Vrsaljko of Atletico Madrid, former Southampton and Liverpool defender Dejan Lovren and AC Milan attacker Ante Rebic.

‘Sometimes in a game things go against you, that’s when you need the crowd more than anything. So hopefully they will get behind us from the first to the last minute. And hopefully everybody leaves the stadium with a big smile on their face.’

Clarke accepted that his team were underdogs. ‘Obviously Croatia are the favourites, finalists at the last World Cup,’ he said. ‘They will be favourites.

‘We will have a little bit of an advantage in that we will have a home crowd. But the Croatian players will be able to deal with that atmosphere. We go out there determined to give or best performance.

‘If we can reach our levels then hopefully that’s enough to get us through to the knockout stages of a major competition for the first time in Scotland’s history, and that would be a major achievement.’

Scotland are the only team yet to score at Euro 2020, but they have had 30 attempts at goal in their two matches – more than all their Group D rivals and more than a number of the teams who have played three games.

‘If we reach the performance levels of the other night then I think we will be very competitive in the game and then that you need that little stroke of luck that every team needs in a big game. Hopefully it’s our turn to be the lucky team.’

Scotland have never qualified out of the group stage of a major finals, which includes eight World Cups and two European Championships, but victory will ensure they progress.

They could even leapfrog England into second if the Czechs win at Wembley and they overturn a three-goal deficit on their neighbours.

If the Tartan Army are looking for an omen, Scotland won their previous two final Euro matches in 1992 and 1996 and have not lost to Croatia in five meetings.

Steve Clarke’s side were handed an even greater incentive last night after groups B and C both ended with the third-placed teams on three points.

A Scotland win against Croatia today would therefore move them to four points and ensure they would at least qualify as one of the four best third-placed teams.

The Tartan Army were looking for a clear winner in the game between Austria and Ukraine and Christoph Baumgartner’s strike gave Scotland’s World Cup qualifying rivals a 1-0 win to seal progress and leave Ukraine on three points.

Group B results also went Scotland’s way with Denmark’s first win of the tournament, a 4-1 thrashing of Russia, and Belgium’s 2-0 triumph over Finland leaving both losers on three points.

Defender Liam Cooper, 29, feels Scotland blew away any signs of nerves and answered doubts about their quality with their performance against England.

‘There was always going to be nerves but they soon go,’ the Leeds centre-back said. ‘You realise the job at hand and you get on with it. The lads who played the other night proved themselves on the world stage, that we belong here.

‘The nerves have gone and it’s all focus on Tuesday night. It’s a massive game, probably the biggest game Scotland has seen for a very long time, and it’s one we are all very excited about and looking forward to.’ 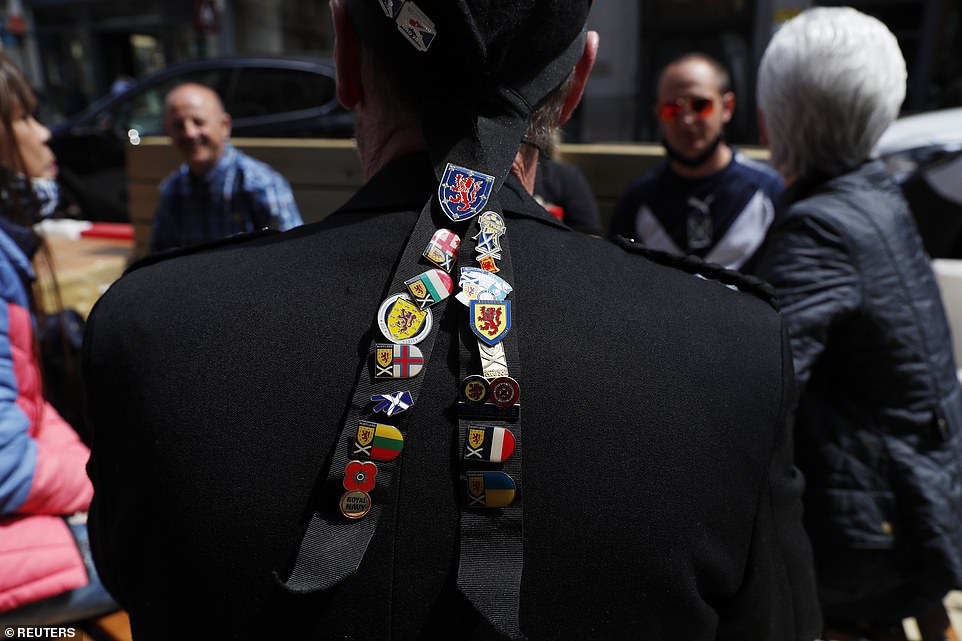 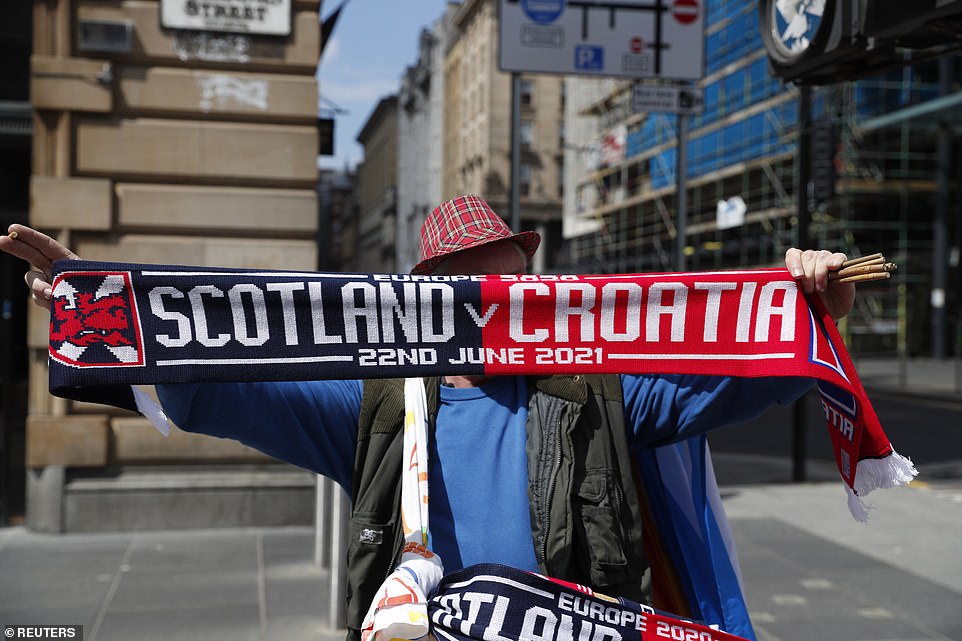 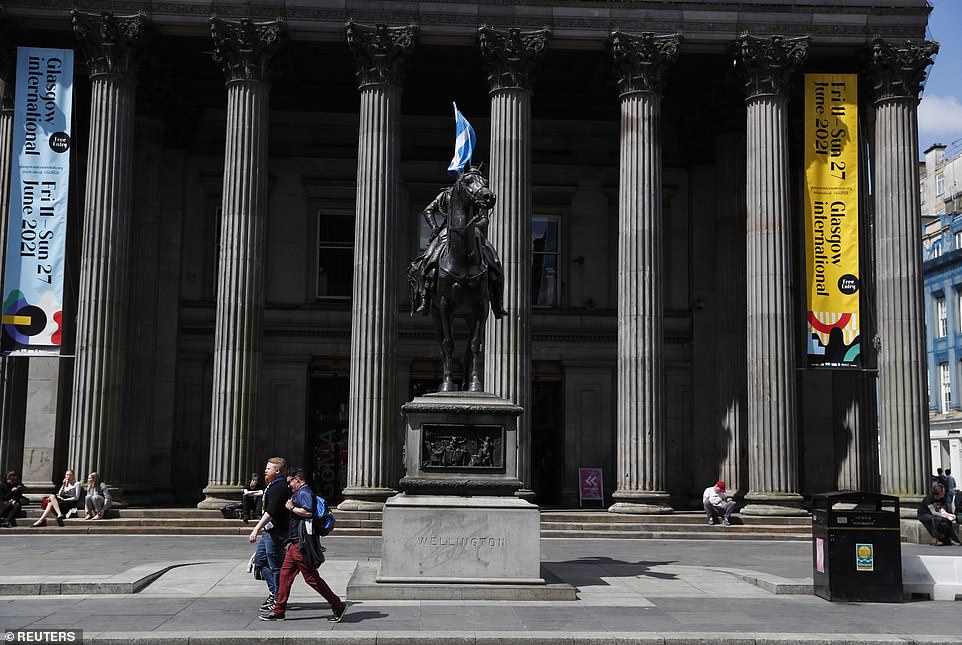 The Scottish flag on the equestrian statue of Arthur Wellesley, the 1st Duke of Wellington, outside the Gallery of Modern Art 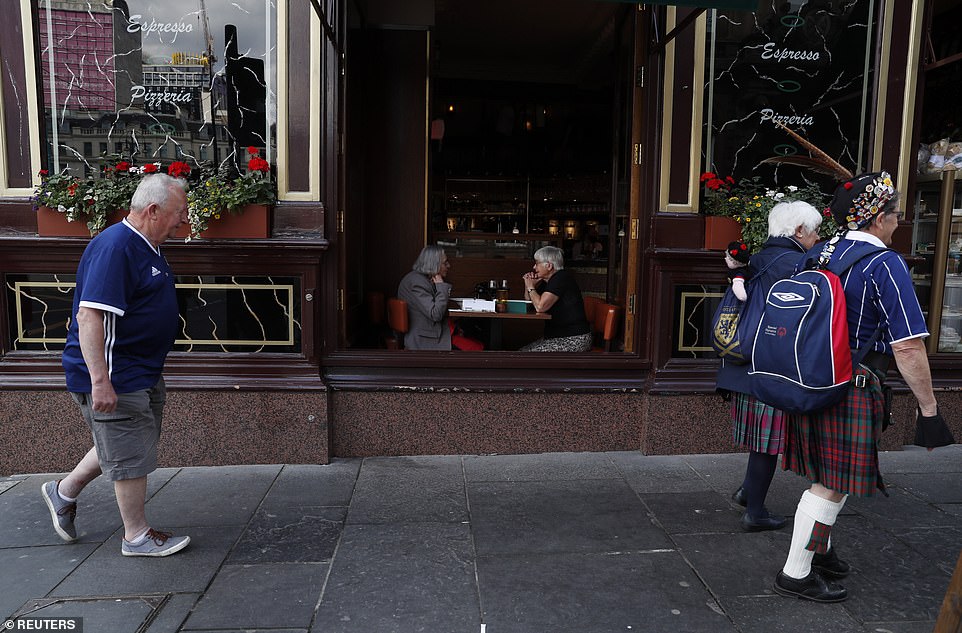 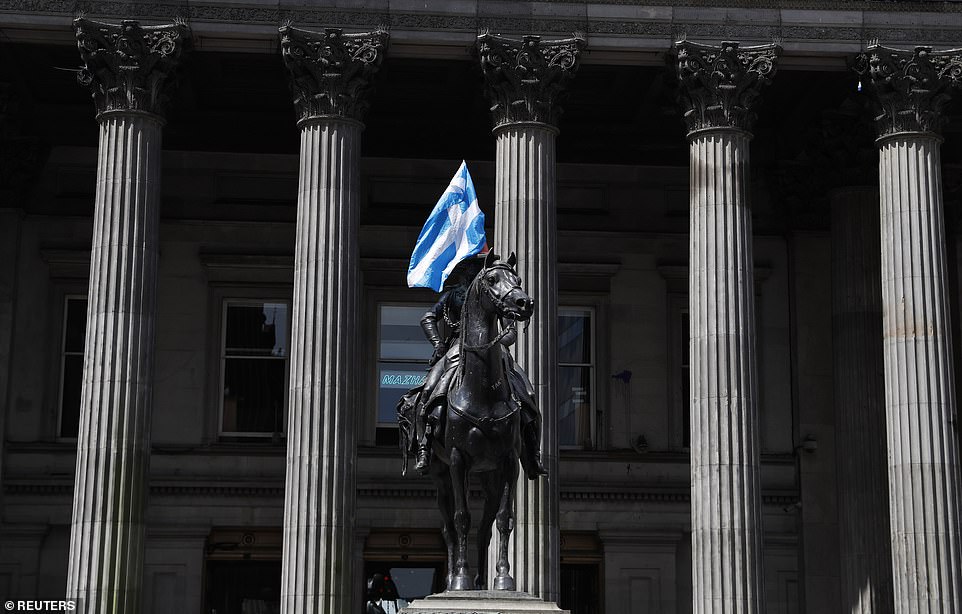 The Scottish flag is seen on the equestrian statue of Arthur Wellesley, the 1st Duke of Wellington, in Glasgow this afternoon 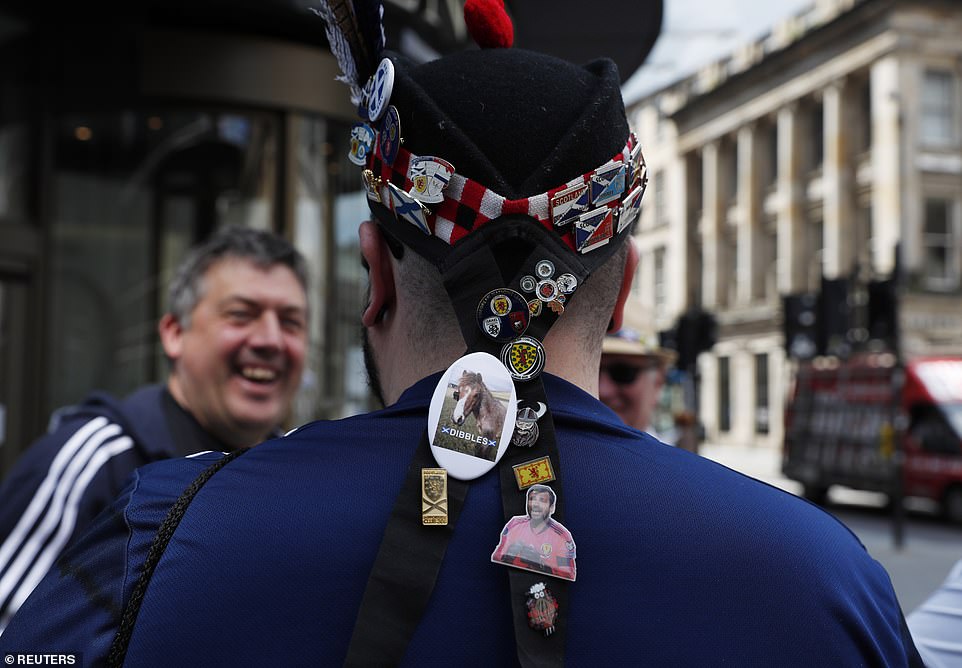 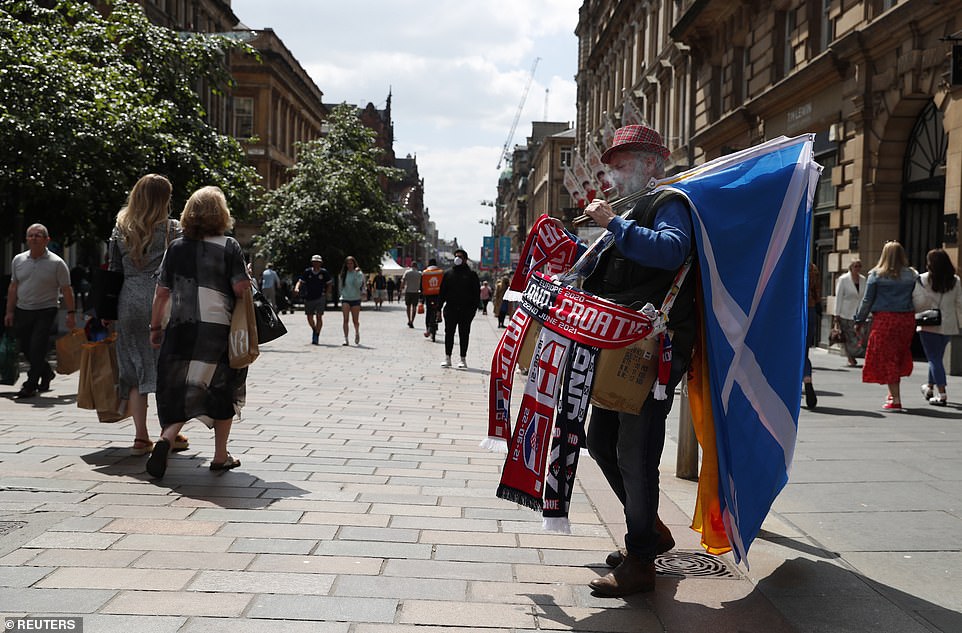 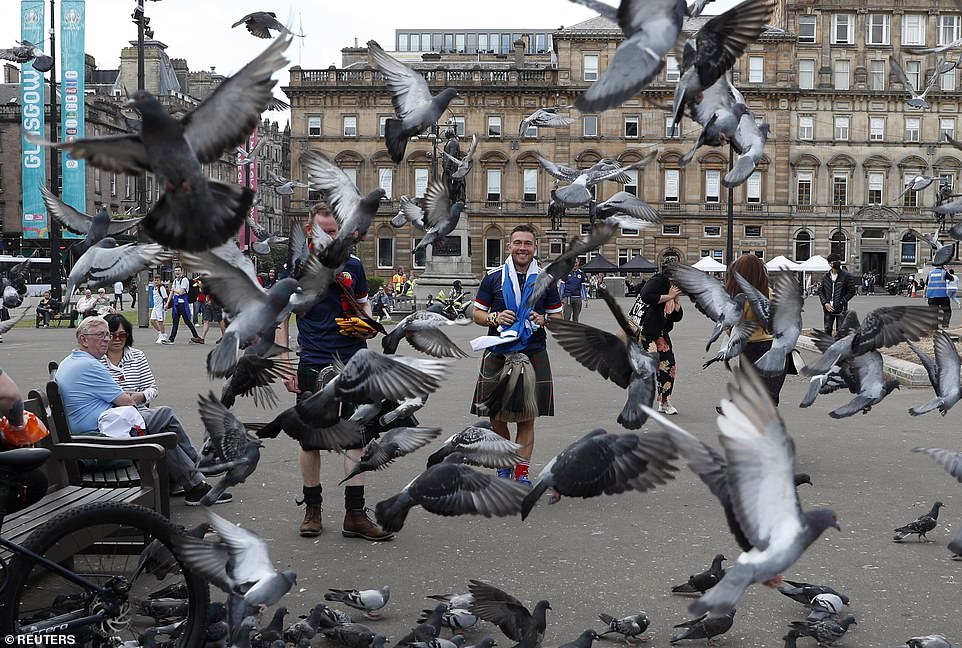 Meanwhile, Mount and Chilwell are out of England’s clash with the Czech Republic tonight and must remain in isolation until the start of next week.

The Three Lions’ preparations for their final Group D match were thrown into chaos when it emerged that the Chelsea pair had been in contact with Gilmour, who tested positive for coronavirus.

Mount and Chilwell will now miss the pool decider at Wembley and could also miss England’s last-16 match, with qualification assured but their place in the group up in the air.

The Football Association said in a statement: ‘We can confirm that Ben Chilwell and Mason Mount must isolate up to and including next Monday, June 28). This decision has been taken in consultation with Public Health England.

‘The pair were confirmed overnight as close contacts of Scotland’s Billy Gilmour after his positive test following last Friday’s match. Chilwell and Mount will isolate and train individually in private areas at England’s training base St George’s Park, with the rest of the squad returning there after tonight’s fixture against Czech Republic.

‘We will continue to follow all Covid-19 protocols and the UEFA testing regime, while remaining in close contact with PHE. The entire England squad and staff had lateral flow tests on Monday and all were again negative, as was the case with Sunday’s UEFA pre-match PCR tests. Further tests will be carried out as and when appropriate.’