Motorists may well be familiar with sculpture Fire Within Two on the M1 Freeway at the Kororoit Creek Road intersection between Melbourne and Geelong. It was the creation of sculptor Adrian Mauriks, who has died following a battle with cancer.

Mauriks, the creator of many notable sculptures in Melbourne, including the installation Silence at Docklands, became known for his prolific volume of sculptural work.

Adrian was born in Holland and emigrated to Australia with his family in 1957. The family were in the printing business and Adrian completed his apprenticeship in printing before developing an interest in painting. In 1965, he travelled to England and Europe with his wife, Mary, and the two years they spent wandering through art galleries ignited his passion for art.

Between 1972 and 1978, Adrian completed a diploma of arts followed by a graduate diploma of fine art at the Victorian College of the Arts, Melbourne. Soon after this, he moved to the hills of Boolarra South, Gippsland, with Mary and their four young children.

Adrian began teaching at the School of Visual Arts at the Gippsland Institute of Fine Education in Churchill (now Federation University). Over the next 18 years, he took on many other lecturing positions at several locations including the University of Melbourne and Ballarat University. 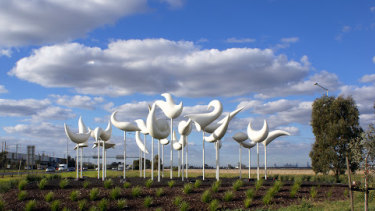 Adrian Mauriks’ Fire Within Two on the M1 Freeway in western Melbourne.

His early work used stone, steel or bronze and include the work Bird Totem (1988), a six-metre bronze piece outside the World Trade Centre and National Bank Plaza, Sydney.

Renowned art critic Ken Scarlett described his early works as “frequently … black in colour and black in mood …” but for Adrian it seems to have been the beginning of his inner journey, one that would radically change his sculptural output. 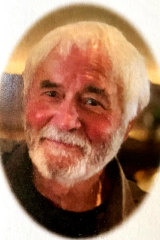 His multi-piece installations invited engagement and interaction; there were things to sit on, lounges to lie in, gateways to walk through. According to Scarlett, Adrian’s new style was “a positive celebration of the power of nature as organic forms”. His creation The Garden of Eden was an early example of this style and it was these large outdoor installations that would become instantly recognisable as his work.

His most ambitious and well-known work is Silence (2001-02) on the New Quay promenade at Docklands, Melbourne. Consisting of 13 separate sculptures over 200 square metres, it suggests a surreal landscape that adults and children are encouraged to journey through, to touch and to interact with. A plaque at the site features the poem by Adrian that inspired the work and includes the lines, “In the landy (sic) between Mirboo north and Boolarra south, silence came upon me and brought tears to my soul … Silence is the secret, and the holy grail … ”

Shortly after Silence was completed, Adrian’s studio in the Boolarra South hills burnt to the ground one night in a storm in 2003.

For Adrian, the loss, although traumatic, became part of his journey: a rebirth and the rebuild. The Fire Within Two (2011) on the M1 freeway was described by him as “a metaphor for the inner fire of us, liberating creativity”.

A more recent large installation is Impulse (2017), which he was commissioned to produce for the Point Leo Estate Sculpture Park on the Mornington Peninsula. Four large pieces, three of them floating on a pond, suggest a journey: Bird (representing The Call), Vessel (the journey), Cluster (the gateway) and Bud (rebirth).

I was privileged to work with Adrian for a short time during the construction of Impulse.

A strong work ethic and meticulous attention to detail were obvious. Hour upon hour was spent shaping foam and applying epoxy resin followed by endless sanding, painting and, if necessary, flotation testing using the giant crane and water tank he had purposefully installed on his property.

Adrian was a deep thinker, always contemplating his next project and he had strong ideas and beliefs. There were things he wanted to say, and sculpture was how he sought to deliver his message. And. although his later sculptural works suggest a playfulness. there was a serious message that he wanted to convey – the environment is suffering, and we need to take care of it.

His own private contribution to this consisted of revegetating large portions of the family’s 48-hectare property (with the help of a Greening Australia grant) with thousands of native and indigenous trees creating a bush haven for local flora and fauna. According to Adrian, we need to: “Remember to live. To notice the trees, the clouds, the changing seasons, as well as the ever-increasing process of miniaturisation and the immoral onslaught of inappropriate decisions made in corporate boardrooms of the world concerning unsustainable ecologically bankrupt attitudes.”

As Scarlett wrote: “Adrian Mauriks would like us all to pause, contemplate, consider the fate of humankind and the future of our environment.”

Over his 50-year career, Adrian created and exhibited prolifically, nationally and internationally, in individual and group exhibitions and there are many permanent installations in and around Melbourne and Sydney.

He was awarded many prizes including the VCA Art Prize and the Lorne Sculpture Prize. Beyond his art, he was a devoted husband and a loving father to his four children and grandpa to his eight grandchildren. Those who knew him well spoke of him as a dependable, reliable and philosophical man.

Adrian is survived by his wife Mary and their children.