As the Prime ­Minister battles coronavirus in St Thomas’ Hospital, the woman who changed the course of Boris Johnson’s life has issued a heartfelt, personal plea, urging him to recover soon — for the sake of the nation.

‘He has great inner strength. We need him,’ Tessa Pritchard-Gordon tells me from her home in Suffolk, speaking about Boris for the first time.

‘He was always a leader. He was his own person. He could always make people do it his way.’ 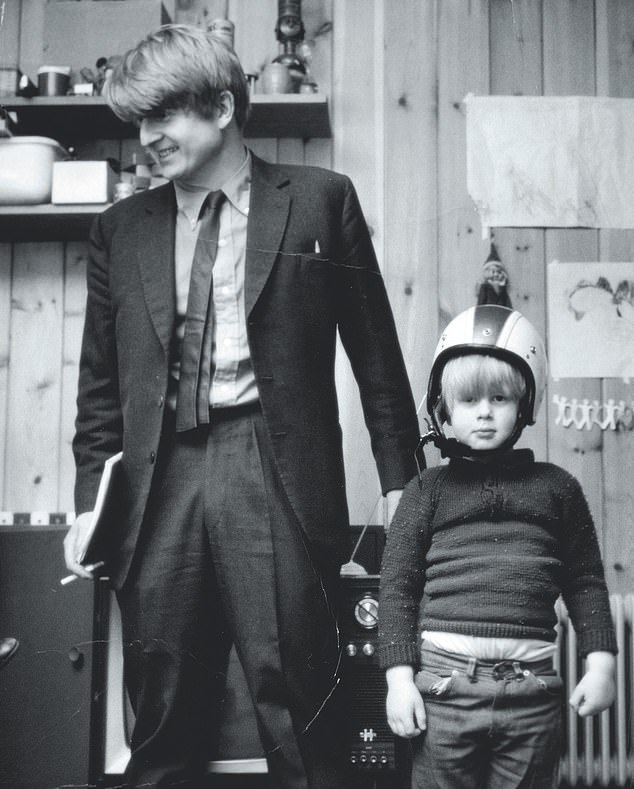 Astonishingly, this conviction stems not from encountering Boris in adulthood — but from when he was just 11 and Tessa, 21, was personal assistant to Clive Williams, headmaster of Ashdown House prep school in Sussex.

The school took only boys at the time, but Stanley Johnson, Boris’s father, called from Brussels to say that, while he wanted to send his son there, he would only do so on condition that his daughter, Rachel, could go there, too.

‘It was June and he wanted them to start in September. I rang round a number of parents to see if there were any who wanted to send their daughters,’ recalls Tessa. She managed to find four who did. So the blond-haired new boy arrived with his sister a few months later. ‘He was very much in his own world, not one of the sporty chaps running around in a gang.

‘Each morning he would come to me to collect his copy of The Times, delighted to get it, looking at me from underneath his fringe. 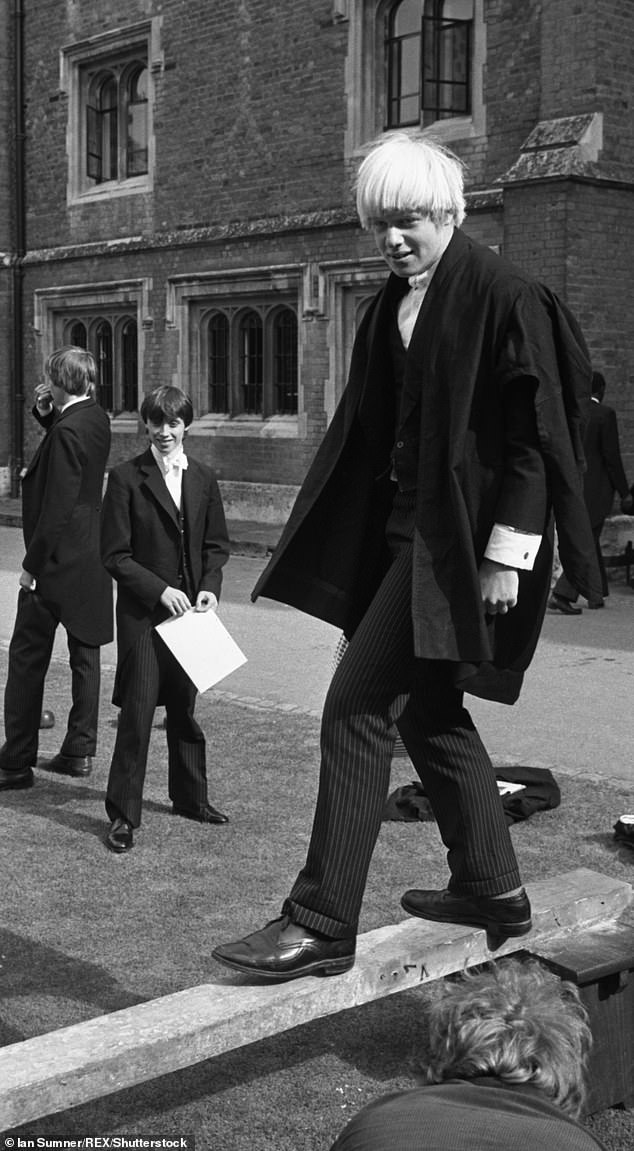 ‘I still see the same person. He has the same hairstyle and the same walk as he does now — and the same little grin’ Tessa tells me.

‘I used to get their rail tickets to London. Then he and Rachel got to Exeter by themselves. They were very close to each other and very self-sufficient. I never remember him being ill. He was a bookworm, loved learning. He went straight into the scholarship class.

‘But he was really popular. He had a presence, right from the beginning. He shone in the debating club and whenever he had an acting role he became another person.’

The headmaster was similarly impressed. ‘Clive Williams had a first in classics from Cambridge. He was teaching him Greek and Latin, but he said that he couldn’t teach him much more by the time he was 12.’ 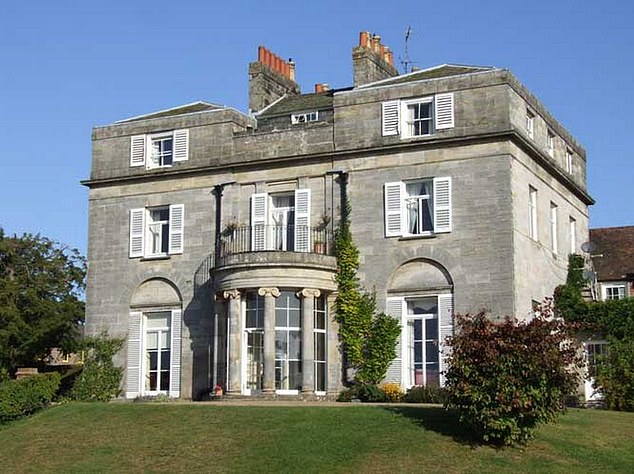 Williams, Tessa adds, had made an even more startling remark at the beginning of his protégé’s second term. ‘He said: “He will be Prime Minister.”

‘An incredible statement, he was always meant to lead,’ remembers Tessa, who concludes with a direct appeal to the boy she helped ­nurture. ‘We know you’re giving it your best shot to get better—– and you will and you must, because we need you.’

I’ll bow out with a flute of fizz, says screen siren Olivia

A rallying message of support to us all from Dame Olivia de Havilland, who will be 103 in July and is in lockdown at her home in Paris.

The oldest living Oscar winner, who is the only surviving cast member of Gone With the Wind, is sanguine about the crisis, telling me: ‘I hope everyone has a safe, and clean, next couple of weeks.’

And she is giving some thought to her own future: ‘lf I must leave this life, I would like to do so ensconced on a chaise longue, ­perfumed, wearing a velvet robe and pearl earrings, with a flute of champagne beside me and having just discovered the answer to the last problem in a British crossword.’

Why Mary Beard is not about to lose her Marbles

Dame Mary Beard, finally installed as a Trustee of the British Museum after a tussle with Downing Street, is cautious over the vexed question of the return of the Elgin Marbles to Greece.

‘I have no doubt that during my time at the Museum, the Trustees will be engaging with all these questions (indeed they already are), and I hope I can add a useful perspective of my own,’ the classicist says.

‘But don’t let’s imagine that debates like this are new in the history of museums across the world.

‘Museums have always been controversial. Who should be allowed in? And on what terms? ‘What should they put on display?

‘Who has the right to choose? And many more. I guess that one job of a Trustee is to ensure that those debates continue — constructively.’ A sphinxish answer worthy of any politician. 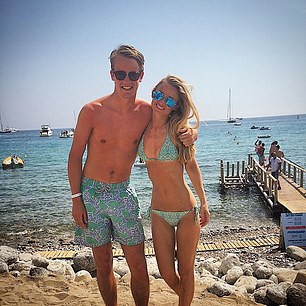 George Spencer-Churchill with wife Camilla Thorp taking in some sunshine

The future Duke of Marlborough, who completed a 3,000-mile row across the Atlantic Ocean last year, is now preparing for ­uncharted waters of a rather different kind.

I can disclose that George Spencer-Churchill, the 27-year-old heir to Blenheim Palace and a £100 million fortune, is to become a father.

His wife, interior designer Camilla Thorp, 32, is pregnant with their first child who, if male, would be second in line for the Marlborough dukedom after insurance broker George.

Having teased friends with a picture of herself and George feeding lambs with bottles of milk — claiming they were ‘getting some practice in’ — Camilla confirms they have a baby on the way. 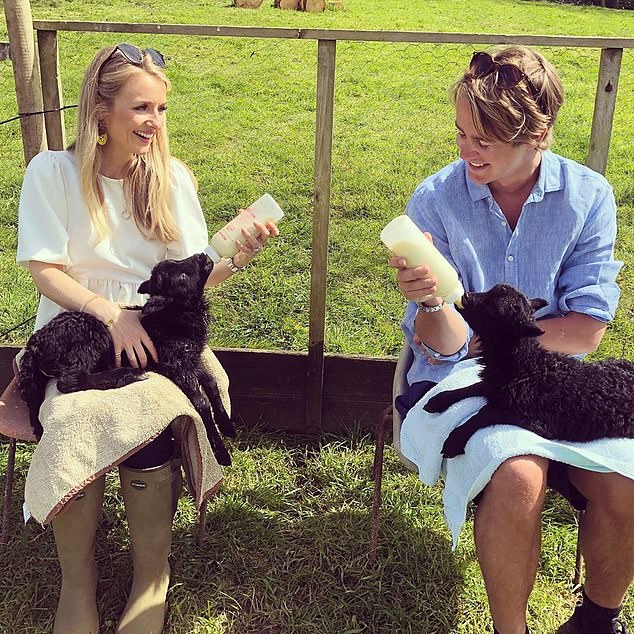 Parents-to-be – George and Camilla feeding lambs with bottles of milk, ‘getting some practice in’

Prince Harry’s ex-­girlfriend Cressida Bonas admits she has turned to cannabis after struggling with anxiety and a fear of failure for several years.

The 31-year-old actress, who dated Harry for two years before he married former Suits star ­Meghan Markle, uses cannabidiol — aka CBD — which is a legally sold compound derived from the marijuana plant.

‘CBD has always helped me sleep, it makes me feel calmer and seems to soften those racing thoughts — especially in uncertain times like these,’ she explains.

‘CBD pillow mist is up there with my favourites . . . the ingredients of CBD, lavender and chamomile are wonderfully relaxing.’

Prince Charles’s goddaughter India Hicks knows how to lift her spirits. Stuck at home in the Bahamas with her partner, David Flint, and their five kids, India is putting her laundry basket to good use in lieu of weights. India posted a video of herself raising and lowering the basket as she crouches into a squat. ‘Don’t let corona stop you, even on a month-long lockdown,’ she said.

TV’s Andrew Marr is the latest convert to the popular Houseparty app. ‘I am keeping in touch with friends through Houseparty and it seems to be working very well,’ he says. ‘At the moment I’m doing my exercise just before 6am and taking a walk through the park, which is at that point empty. It’s lovely and I’ve noticed that before you had to dodge runners coming at you in clusters. But now everyone is taking really meticulous attempts to avoid each other.’ 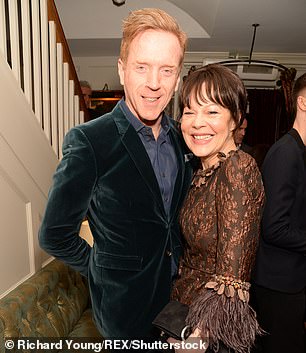 He is known for his smouldering looks but it was Homeland star Damian Lewis’s sense of humour that won the heart of his future wife actress Helen McCrory when they first met in in 2003 — and it was love at first sight for her. ‘He just made me laugh a lot and he still does,’ Helen, 51, recalls.

She has even forgiven him for giving her the dreaded surprise party for her 50th birthday. ‘We were in a hotel and I was in bed with a really bad cold and said, “Let’s just get a burger and a bottle of red wine and watch telly,” and he said OK. But then I thought “No! I’m 50!” and went downstairs — and there was everybody waiting for me.’

Tilda Swinton never wanted to be an actress despite going on to win an Oscar. The Chronicles Of Narnia star says her acting success was an accident and a mystery. ‘I never set out to do most of the things that I’ve done and I’m doing,’ she says. ‘I certainly never set out to be an actor. I still find it embarrassing when I hear myself referred to as an actor. I expect real actors to stand up and protest.’

Gordon Ramsay, who is facing criticism for moving to his £4.4million mansion in Cornwall amid the coronavirus outbreak, says he has done more cooking in the past two weeks than in the past two years. ‘It is mayhem,’ says the potty-mouthed chef who is in lockdown with five children. ‘The kids look at me in the morning and say “Dad what’s for breakfast? And what about lunch, I like those sort of quesadillas, can we have butter chicken for dinner?” It’s insane.’ What’s wrong with Coco Pops and a sarnie?

END_OF_DOCUMENT_TOKEN_TO_BE_REPLACED

END_OF_DOCUMENT_TOKEN_TO_BE_REPLACED
Recent Posts
We and our partners use cookies on this site to improve our service, perform analytics, personalize advertising, measure advertising performance, and remember website preferences.Ok