Senior Victorian government minister Lisa Neville will take another three months off work as she undergoes surgery in her battle with Crohn’s disease.

In late February, the Police and Emergency Services Minister who was also in charge of the hotel quarantine program announced she was in hospital and would take three months off work to rest and recover from the illness she has managed for 32 years. 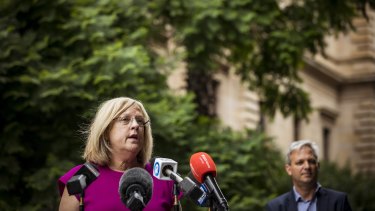 She received medical advice at the time that a period of rest and treatment, including biological drug treatment, would mean she could avoid surgery. In a statement released on Saturday, she said subsequent tests showed her condition had actually worsened and she now required surgery to remove a part of her bowel, which she said would probably keep her from work until the end of June.

“Although it is disappointing and always concerning to have part of your bowel removed, for many who have Crohn’s this can result in a period of remission and enable people to return after recovery to normal life and work,” the statement said.

“I have every confidence in my medical team and the nursing support at the hospital that this surgery will give me the chance to achieve this.

“I would especially like to thank all those who suffer from Crohn’s or similar illnesses who have reached out. This is very much a hidden illness and unless you have experienced it firsthand it is hard to understand the toll it can take, both physically and mentally.

“As stress is a major driver of the condition, I kindly request privacy over the next three months, as I focus on my recovery and return to work.”

The absence of the 56-year-old member for Bellarine, coupled with Premier Daniel Andrews’ absence due to a back injury, means the government is without two of its most senior and respected voices in the cabinet. Ms Neville is – along with acting Premier James Merlino, Treasurer Tim Pallas and Transport Infrastructure Minister Jacinta Allan – part of the Premier’s core group of trusted cabinet ministers.

Ms Neville, who is regarded by colleagues as hard working and competent, was elected in 2002 and first appointed as a minister in 2006. She has been a steady hand for the government managing contentious reforms to the state’s fire services after years of disputes between forces aligned to both career and volunteer firefighters.

Danny Pearson, who is considered a future senior minister, has been acting in Ms Neville’s place and will have responsibility for the hotel quarantine program when international flights resume on April 8. There is significant political risk for the government in restarting the hotel program because COVID-19 leaks from hotels have twice sent the state into lockdown.

Richard Wynne has been serving as acting Minister for Water and Gayle Tierney would act as the duty member for the seat of Bellarine.

Crohn’s disease is a chronic condition causing painful inflammation of the bowel and digestive tract. Close to 75,000 Australians suffer from it or related forms of inflammatory bowel disease.