Shoppers habits are returning to normal with Brits making more trips to supermarkets and purchasing less online, according to new figures.

The coronavirus pandemic saw online buying explode after non-essential shops were forced to close and customers were told to stay home during the UK’s lockdown.

But the latest report from Kantar shows that online supermarket sales growth has now halved since the height of the pandemic – to 46 per cent – as restrictions eased.

Instead, the number of trips to grocery stores rose by 4 per cent month-on-month in the four weeks to April 18.

Kantar said older shoppers accounted for nearly half of the rise in so-called footfall to stores with much of the over-65 community now vaccinated. 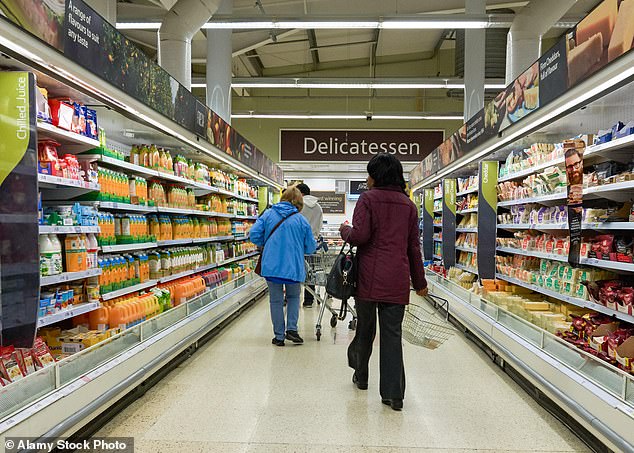 Shoppers habits are returning to normal with Brits making more trips to supermarkets and buying less online, according to new figures

Overall supermarket sales rose by 5.7 per cent to £31.6billion in the 12 weeks to April 18 in a further slowdown in the rate of growth seen a year earlier when shoppers panic-bought at the start of the coronavirus crisis.

But one-month figures showed a return to growth with take-home grocery sales rising by 6.5 per cent in the four weeks to April 18.

Kantar said that, after the initial pre-lockdown rush in 2020, last April was comparatively quiet.

The figures also come as wider retail reopened on April 12, with lockdown restrictions lifting for non-essential retail across England. 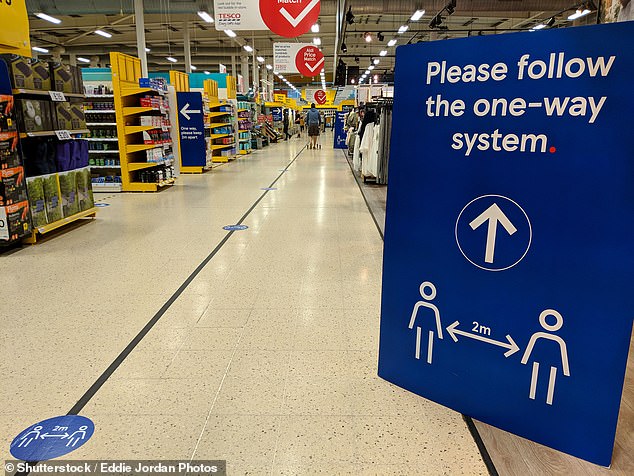 The last year has forced shops to adapt – adopting measures such as floor markings for social distancing, one-way systems and checkout screens

The last year has forced shops to adapt – adopting measures such as floor markings for social distancing, one-way systems and checkout screens – all boosting consumer confidence.

Which? has called for supermarkets to ensure that safety measures remain a priority so that people can shop confidently under eased lockdown measures.

Fraser McKevitt, head of retail and consumer insight at Kantar, said: ‘There is a growing sense that the worst of the pandemic is behind us and people are becoming more comfortable with venturing out to the supermarket.’

He added: ‘While the market may fluctuate between growth and decline in the months ahead, depending on the year-on-year comparison being made, the fact that trip numbers are up and basket sizes down suggests that habits are slowly returning to normal.’

Earlier this month, it was revealed that almost 190,000 jobs have been lost and more than 15,000 stores were forced to close in the retail bloodbath since the first national lockdown a year ago.

The Centre for Retail Research said that 188,685 retail jobs in the UK vanished between the start of the first lockdown on March 23 2020 and March 31 this year in exclusive data for the PA news agency.

The figures revealed that 83,725 jobs lost in the period were due to administrations, including major collapses by Debenhams and Sir Philip Green’s Arcadia Group.

Another 92,974 jobs were axed through rationalisation programmes, which included supermarkets Sainsbury’s and Asda cutting thousands of roles.

The devastating impact of the pandemic resulted in 15,153 store closures in shopping destinations across the UK, the figures also revealed.

According to real estate adviser Altus Group, up to 401,690 shops are currently shuttered around the country.

Retail bosses have raised concerns that the high street will still be very challenging for retailers despite the easing of restrictions, as business rates payments return for many.