Home » World News » Should we stop washing our clothes?

Should we stop washing our clothes? 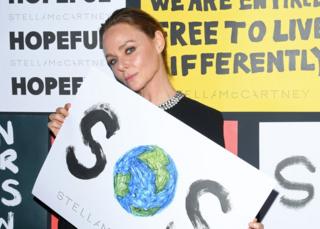 “Basically, in life, rule of thumb: if you don’t absolutely have to clean anything, don’t clean it.”

Fashion designer Stella McCartney said this in an interview with the Observer this weekend, adding that she picked up the tip while working for bespoke tailors on London’s prestigious Savile Row. Instead, she says, the “rule” is to “let the dirt dry and you brush it off”.

It may have been a throwaway comment at the end of the interview, but something about this line stuck with readers – many of whom have been doing several loads of laundry a week.

So does she have a point? Is it better to avoid washing your clothes?

Killing the planet one microfibre at a time

This isn’t the first time McCartney has recommended not washing our clothes. In fact, she has long advocated avoiding the washing machine – both for the longevity of the garments, but also because of the impact washing them has on the environment.

Laura Diáz Sánchez, from the Plastic Soup Foundation advocacy group, agrees with this, particularly when it comes to high-street clothes, which contain more synthetic materials such as polyester and acrylic.

When you do wash, she recommends setting the machine to a lower temperature and using liquid detergent: “Powder detergent creates more friction between the clothes [during washing], so more fibres are released, whereas liquid is smoother. The less friction there is in general, the fewer fibres are released.”

She advises against overloading washing machines for the same reason – fewer clothes in the drum means there’s less friction.

The art of caring for clothes

But it’s not just about microfibres. Washing an item of clothing too often can drastically shorten its lifespan, meaning that you’re more likely to throw it out and buy something new.

Prof Andrew Groves, head of the fashion design course at the University of Westminster, tells BBC News that the friction in washing machines is what gets rid of the stains, but is also what distorts a garment’s shape and colour.

“I have garments in my wardrobe that I’ve had for decades that look brand new, simply because I know how to care for them,” he says – adding that this goes for both high-end and high-street pieces. The better you look after your clothes, he says, the longer they last, and the more sustainable your fashion is.

This is particularly true when it comes to lingerie. McCartney told the Observer that she “wouldn’t change my bra every day”, which is something lingerie designer Naomi De Haan agrees with.

Ms De Haan’s official advice to people who buy from her label, Edge O’ Beyond, is to hand-wash the bras in lukewarm water after about five wears with something mild like baby shampoo.

While the items she sells are more on the luxury end, she tells BBC News that this advice applies to high street underwear as well – though she says sports bras should be washed more often.

“Machine washing can destroy things like delicate lace or silks,” she says. “It can also make the wires pop out, it can make the colours fade, and if it’s got a moulded cup it can make it go all misshapen.”

If you absolutely must machine wash, she adds: “Always do up the hook and eyes to stop any snagging, use a lingerie bag, don’t wash with too much heat, and reshape when it’s out and hang it to dry or lie it on a flat surface.”

But most importantly – never, ever, tumble dry.

Sarah Clayton, head of the Love Your Clothes campaign by environmental charity Wrap, also suggests not washing your jeans, but airing them between wears instead: “If they have a stain you could try spot-cleaning them with water rather than washing the whole garment.”

Letting your jeans fester unwashed may sound a bit unsavoury, but one man in the know swears by it – Chip Bergh, the CEO of Levi’s.

People were a bit disturbed in May 2014 when Mr Bergh proudly declared that the pair of jeans he was wearing at the time had never been washed.

Fast-forward almost five years to March this year, and he told the US broadcaster CNN that he still hadn’t washed them – despite the pair now being about 10 years old.

Prof Groves agrees with Mr Bergh, and recommends sticking jeans in the freezer in order to kill germs instead.

“Most people I know, when it comes to their denim, don’t wash it at all,” he says. “Which might seem strange – it’s a pair of jeans that they might wear every day. But it’s usually because they don’t want the colour to fade.”

This, he says, is an attitude he hopes people will apply to all of their clothes – not just their jeans.