Storm Dennis is Britain’s fourth named storm of the winter and as it bulldozes a devastating path across the country, many people will face life-endangering storm conditions. Several weather forecasters have predicted storm winds to engulf the UK, with certain regions seeing the worst of Storm Dennis’ frenzied assault.

The Met Office has nine amber and yellow weather warnings currently in force from Friday to Monday.

The most severe are the amber weather warnings which are in effect on Saturday and Sunday in the North West, South West, Yorkshire and Humber, Wales, London and the South East.

The weather forecaster has advised that people in those regions see the following effects from the severe storm downpours:

Homes and businesses are likely to be flooded, causing damage to some buildings.

Delays and some cancellations to train and bus services are likely.

Spray and flooding probably leading to difficult driving conditions and some road closures.

A good chance some communities cut off by flooded roads.

Power cuts and loss of other services to some homes and businesses likely. 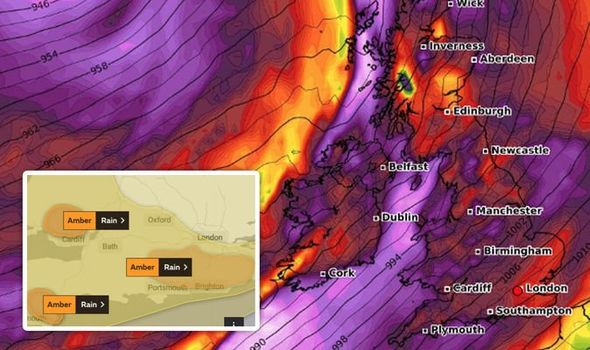 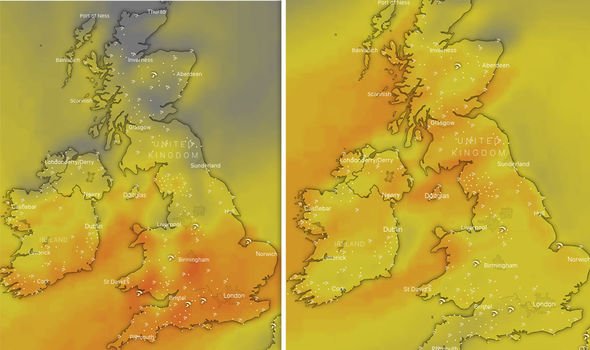 The horrific map shows how almost the entire UK will be battered by winds from 50mph to 70mph.

The map reveals the whole of the UK including England, Wales, Scotland and Northern Ireland will suffer from intense winds.

The strongest winds are likely to be on Saturday afternoon and evening, with a lull overnight, before increasing again during Sunday. 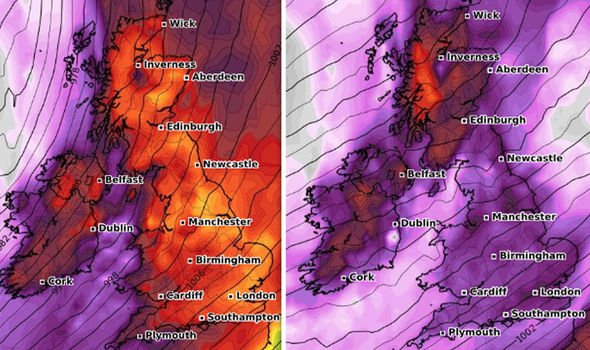 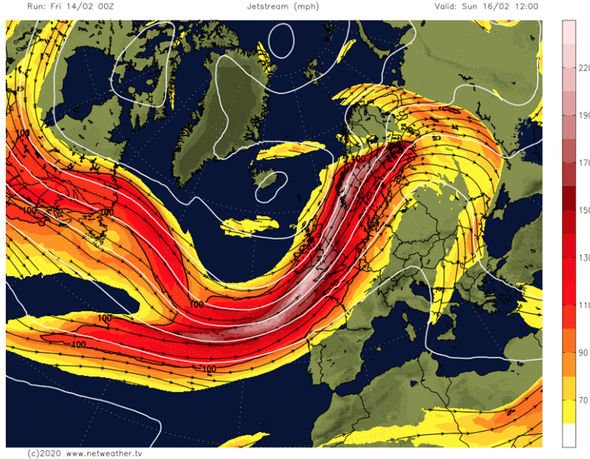 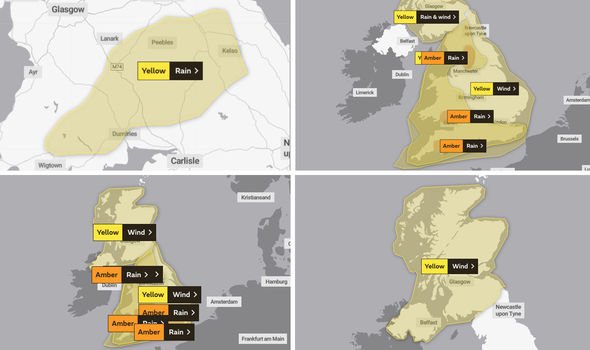 The Netwearther jetstream map reveals parts of the UK could see jetstreams of up to 220mph rip across the UK on Saturday between midnight and midday.

The jet stream is a strong flowing ribbon of air that flows around our planet high up in the atmosphere, at about the level of the tropopause, some five to seven miles above the Earth’s atmosphere.

Jet streams typically flow at about 100mph and often they can influence weather in the UK.

They are like rivers of wind high above the atmosphere which can push air masses around and affect weather patterns.

The system for Storm Dennis will develop in the North Atlantic before tracking eastwards towards the UK and Ireland over the coming days, passing to the north of Scotland on Saturday.

By the early hours of Sunday morning, Windy.com forecasts these intense winds to spread across London and the south-east as well as Wales and the northwest.

Throughout the day on Sunday, strong winds are predicted to develop across Northern Ireland and Scotland. 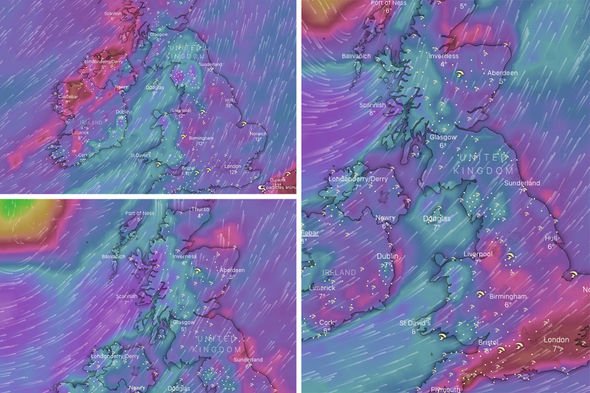 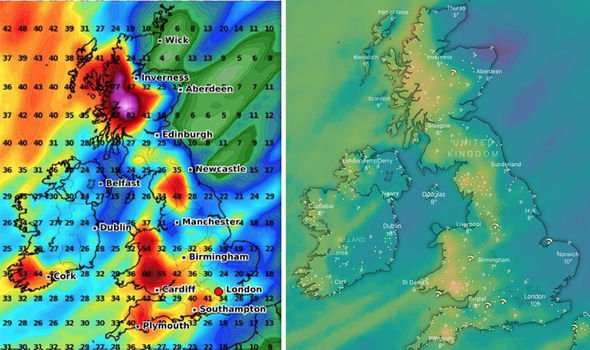 But it is not only strong winds which Storm Dennis will unleash across Britain.

Heavy downpours are also anticipated over the weekend.

The Met Office expects rainfall to engulf parts of Britain this weekend with up to 5.5 inches of rainfall (140mm) possible in some locations.

WX Charts’ total accumulated precipitation map reveals that parts of Britain will experience intense and relentless rainfall which could lead to flooding.

The worst-hit areas according to WX Charts will be Scotland and higher ground in Wales which could see up to four inches (81mm) of rainfall.

The Met Office said: “Spells of heavy and prolonged rain are expected to affect parts of England and Wales over the weekend with a higher likelihood of impacts now expected in some areas.

“This rain is expected to fall across areas already wet from recent rainfall.”

END_OF_DOCUMENT_TOKEN_TO_BE_REPLACED

The 1.8-metre ARCT telescope at Alberta’s Rothney Astrophysical Observatory is the second largest in Canada, used by both astronomers and students to capture images of stars millions of light-years away. But as Calgary expands, those images are being threatened by excessive artificial and outdoor light also known as light pollution.

END_OF_DOCUMENT_TOKEN_TO_BE_REPLACED

UN court says Britain should 'rapidly' give up Chagos Islands

ICJ opinion calls on the UK to ‘complete the decolonisation’ of Indian Ocean archipelago claimed by Mauritius. The United Nations’ highest court has called on Britain to quickly cede control over a chain of islands in the Indian Ocean, the largest of which houses a strategically important American military base,

END_OF_DOCUMENT_TOKEN_TO_BE_REPLACED

The 57-year-old incumbent received 58.27 percent of Sunday’s vote, which observers say had no major irregularities. Senegalese President Macky Sall has won re-election without the need for a second round of voting, giving him five more years in office.  Following the announcement, Idrissa Seck, the opposition candidate and runner-up in

END_OF_DOCUMENT_TOKEN_TO_BE_REPLACED
Recent Posts
We and our partners use cookies on this site to improve our service, perform analytics, personalize advertising, measure advertising performance, and remember website preferences.Ok