Britons are urged to take ‘immediate action’ ahead of torrential rain and 80mph gales which threaten further flooding and wind damage in the wake of Ciara. Dennis could be gearing up to deliver an even bigger punch amid warnings something “potentially worse” will keep the nation in the washing machine through the weekend and into next week. Government forecasters have issued a raft of alerts across England and Wales through the coming days with another in Scotland on Monday.

The centre of the low is forecast to dip to around 920 millibars – the lowest in the North Atlantic since 1993, according to the Met Office.

The Met Office this afternoon confirmed Dennis will fulfil the criteria required to be termed a ‘weather bomb’ with central pressure set to drop more than 24mb over 23 hours in a rapid “explosive cyclogenesis”.

Global meteorological models reveal the storm currently has a central pressure of 965mb which is forecast to plunge to around 917 mb by late Saturday afternoon.

Meteorologist Luke Miall said: “The centre of this low-pressure system is forecast to fall into the region of 920mb, if it goes below 914mb it will be the lowest in the North Atlantic since 1993.

“This low pressure system will be with us for around three days with wet and windy weather continuing into the start of next week. 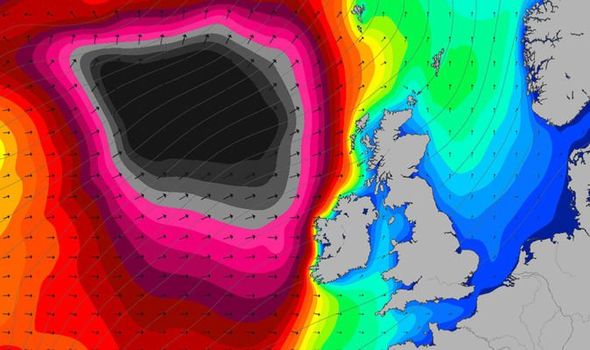 “The emphasis with Dennis is on the rain although we will also see strong winds and gusts of potentially between 60 and 70mph.

Independent forecasters are warning a ‘violent storm’ is about to maul Britain with winds up up to 80mph in parts.

Dennis threatens widespread damage and floods particularly across southern Britain which is in the firing line for the worst of the rain.

“We will see top wind gusts well in excess of 70 to 80 mph,  this would be classed as a violent storm, particularly, in parts of southern and central England. 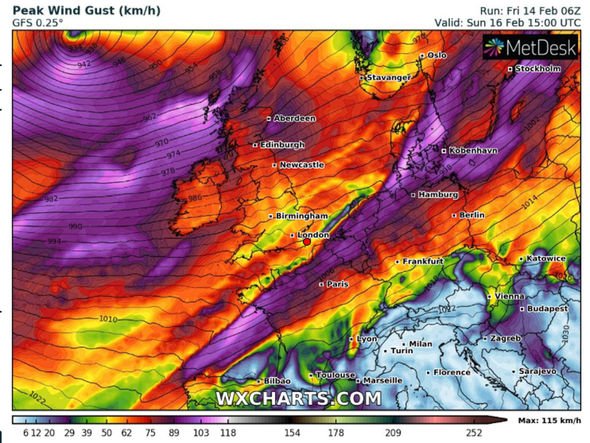 “Widespread and potential structural damage is likely in places, and this could cause further power outages, uproot trees and bring large waves to coastal areas leading to potential flooding.

“Last week’s storm was dubbed the storm of the century and caused widespread havoc, we’re looking at something similar this weekend or potentially worse.”

The Met Office has issued amber warnings for rain across southern and parts of northern England on Saturday and Sunday.

“Homes and businesses are likely to be flooded, causing damage to some buildings.

“Fast flowing or deep floodwater is likely causing danger to life with delays and some cancellations to train and bus services likely.”

Dennis will be the fourth named storm to hit the UK this season following on the heels of Storm Ciara last weekend.

Unsettled weather threatens to rage into next week amid reports of another two storms potentially hitting Britain.

Motoring groups have urged drivers to take extra care on the road and prepare for journeys to take longer because of the weather.

RAC spokesman Ben Aldous said: “After so much wind and rain last weekend, drivers will again have to contend with some pretty dreadful conditions on the road with the arrival of Storm Dennis. 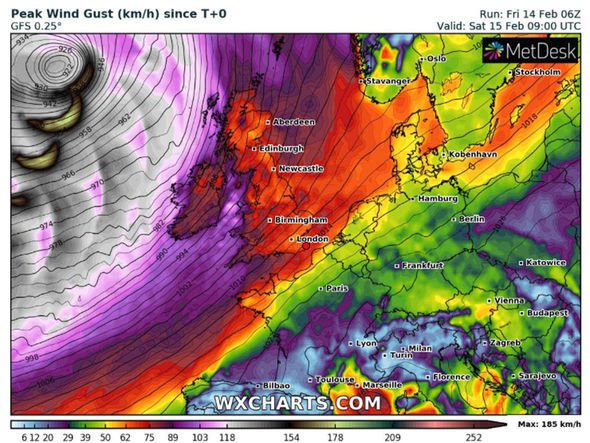 “With transport disruption likely, drivers should expect their journeys to take longer than usual and should stay up-to-date with the latest traffic and travel information as the conditions could change quickly.

“There is also a strong risk of flooding given all the recent rain so it’s essential motorists never attempt to drive through deep floodwater.

“Those that do are not just risking damage to their vehicles but risking their lives and those of their passengers.”

Rivers already full to the limit after Storm Ciara are at the point of bursting putting surrounding regions at risk of severe flooding.

An EA spokesman said: “Storm Dennis will bring widespread, heavy and persistent rain over the weekend.

“River and surface water flooding is possible widely across Wales and the north of England from later on Saturday through Sunday and is probable for parts of the Pennines and upland areas of south Wales.

“River and surface water flooding is also possible widely on Sunday across parts of the south and south-east of England and is most likely in southern parts of that area.”

END_OF_DOCUMENT_TOKEN_TO_BE_REPLACED

END_OF_DOCUMENT_TOKEN_TO_BE_REPLACED
Recent Posts
We and our partners use cookies on this site to improve our service, perform analytics, personalize advertising, measure advertising performance, and remember website preferences.Ok