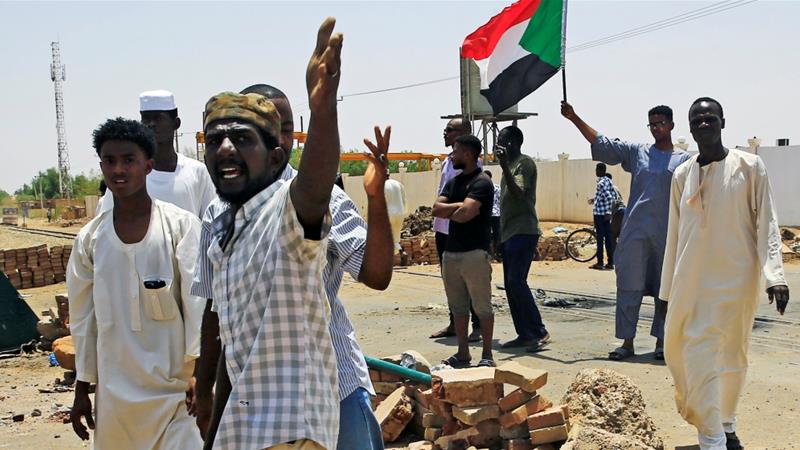 An opposition leader in Sudan says the country’s ruling military has forcibly removed him and two of his colleagues to neighbouring South Sudan, as protesters continued for a second day a nationwide civil disobedience campaign in the wake of a bloody raid on a protest sit-in.

The three deported men are part of the Sudan People’s Liberation Movement-North (SPLM-N), one of the country’s main rebel groups and part of an alliance pushing for a handover to civilian rule after the military deposed President Omar al-Bashir in April in the wake of mass protests demanding his resignation.

Yassir Arman, the most prominent of the three men and the deputy head of the SPLM-N, was detained on Wednesday after returning from exile following al-Bashir’s removal.

The two others, SPLM-N Secretary-General Ismail Jallab and spokesman Mubarak Ardol, were arrested after meeting visiting Ethiopia’s Prime Minister Abiy Ahmed in Sudan’s capital, Khartoum, as he tried to mediate between the ruling Transitional Military Council (TMC) and civilian opposition.

“I was deported in exile from Khartoum to Juba,” Arman told Al Jazeera by telephone on Monday from South Sudan’s capital. “It is against my will. I haven’t chosen that, together with my colleagues.

Arman said his colleagues were with him and described their condition as “all right”.

A statement from SPLM-N chairman Malik Agar said the three officials had been deported in a military plane to Juba.

“This happened despite their rejection of the forceful deportation,” the statement said, adding that the move showed the military council’s intention “not to hand power to the civilians and not to reach peace”.

Abiy said on Monday on Twitter he had spoken to the head of the TMC, Lieutenant General Abdel Fattah al-Burhan, about “mediation progress”.

The deportations came as many shops and businesses in Khartoum were closed on the second day of athe general strike and civil disobedience campaign, aimed at putting pressure on TMC to relinquish power.

Opposition and protest groups called for the campaign after security forces stormed the protest camp on June 3, killing scores of people and dealing a blow to hopes of a peaceful transition.

The Declaration of Freedom and Change Forces (DFCF) opposition alliance, which includes the SPLM-N, was involved in weeks of negotiations with the TMC on a transition towards elections, but the alliance broke off the talks after the storming of the sit-in.

On Monday, some shops had begun to reopen, including in Khartoum’s central market, but many stores and businesses remained closed.

“We are against the killing of civilians and we support the [DFCF] but today I returned to work because I earn my income day by day and I am the only source of income for my family and my children,” Saleh Yaqoub, a 53-year-old shopkeeper, told Reuters News Agency.

Lieutenant General Jamaleddine Omar, from the TMC, said on Monday that by closing off roads and setting up barricades, the protesters committed a crime.

He said the military and the Rapid Support Forces (RSF) – the paramilitary group accused of violently dispersing the sit-in protest – have beefed up their presence across the country “to restore life back to normal”.

Opposition doctors have said at least 118 people have been killed since the raid on the sit-in a week ago. The TMC has confirmed 61 deaths, including three members of the security services.