Swimming coach is accused of torturing babies but parents defend her

A Russian swimming coach has been accused of ‘torturing’ babies underwater after footage showing her teaching methods emerged, experts say.

Elena Rodionova claims to cure children’s disabilities, but her techniques have been compared by a pro-Kremlin newspaper to ‘exorcism rites’.

The swimming coach forces babies head first into the water and tosses them around in a pool gymnastics session in her city of Krasnodar, southern Russia, videos show.

The woman, however, urged parents to ignore the advice of experts.

The swimming coach claims to boost child development with active ‘water gymnastics’ lessons as parents queue to enrol their children in her classes.

‘She taught my child a great deal but I never argue with her,’ she said.

‘My child with cerebral palsy began to walk. 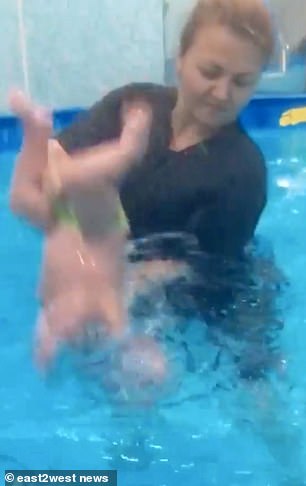 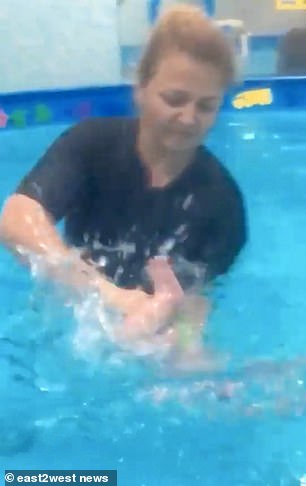 ‘I will be grateful to her for the rest of my life.

‘All coaches need to work in this way and not just splash water.’

Ella Starkova said her infant was swimming ‘independently’ after a year and half with Ms Rodionova. 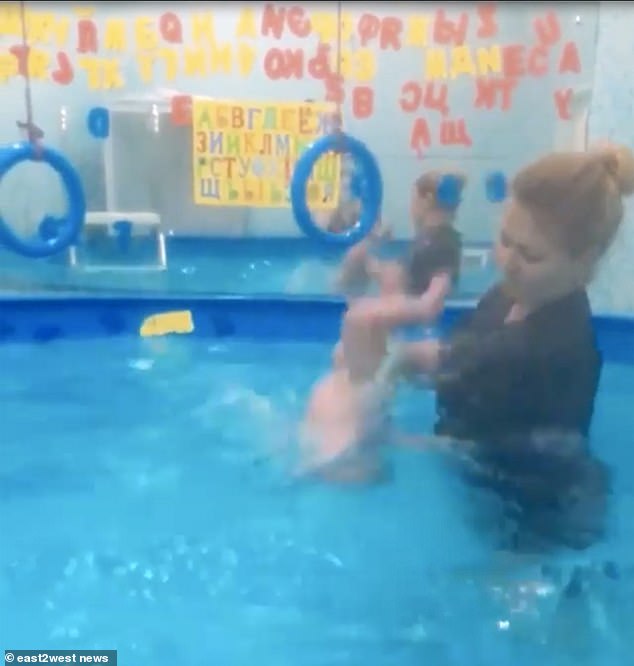 ‘Our child swims independently, pulls up, refuses to leave the pool,’ she said.

‘She gives him such enthusiasm and joy every lesson.’

‘This despite the fact that when Maxim was born, doctors questioned his ability to walk,’ she said. 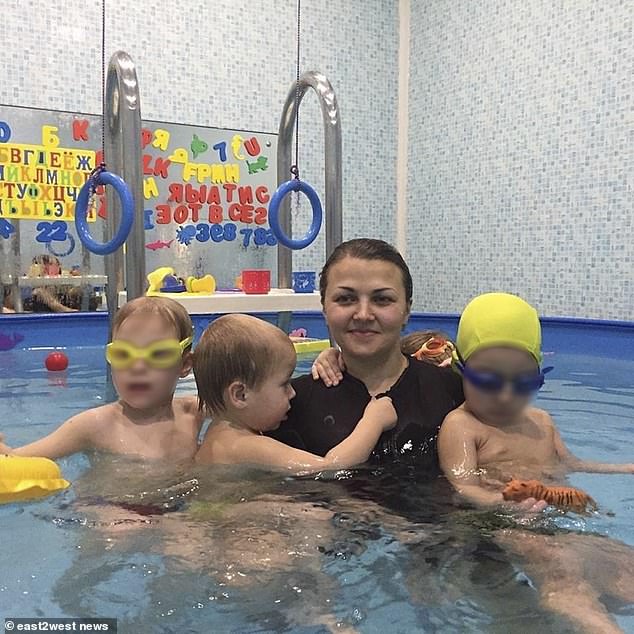 Ms Rodionova, pictured with some babies, is very popular and parents queue to enrol their children in her classes

‘Our child’s work with Elena became a salvation, gave hope and eventually results that exceeded all our expectations.’

Oksana Zarevina said: ‘She believes that she makes the child stronger, more enduring.

‘But when a child is two or three months old, they do not understand what is being done with them.

‘They cannot be indignant or let parents know they don’t like the exercises.

‘Growing up, the baby will fear of water.’

‘Kids can be taught everything with the help of soft, gentle workouts that are comfortable,’ she said.

She added ‘tossing babies in this way should be prohibited’. 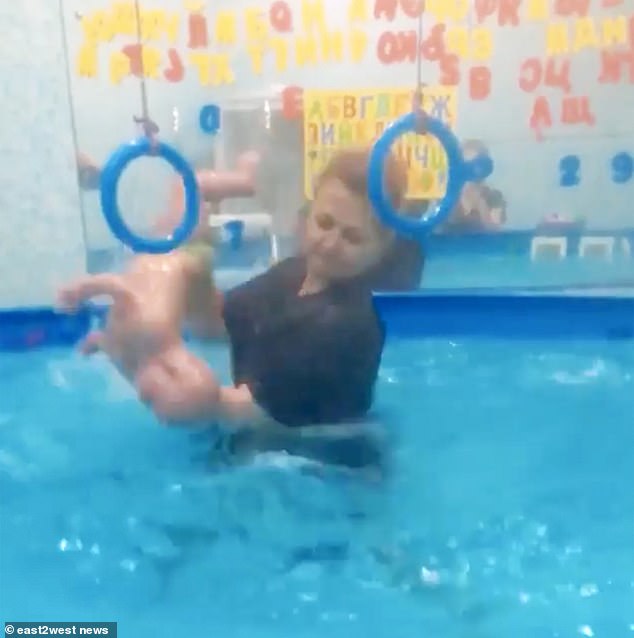 Ms Kostromina branded the technique ‘scary’, saying: ‘Many coaches who see Elena’s videos worry about the health of these kids.’

Paediatrician and neonatologist Elena Ignatieva warned: ‘Such actions with a child should not be allowed.

‘They can lead to health and psychological impairment of the child’s development.

‘Any somersaults under water, forwards or backwards, even sideways, are physiologically unfounded.

‘This is the risk of inhaling under water and hypoxic brain haemorrhages. 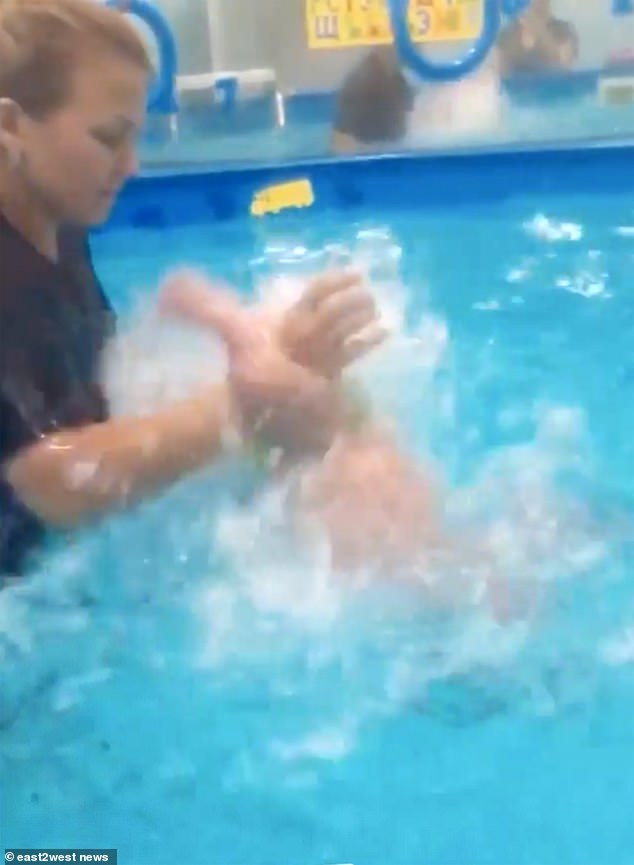 ‘In the future children can develop kinetosis (motion sickness).

‘And this is only a small part of what such rough lessons can lead to.

‘The purpose of such manipulations is incomprehensible to me.

‘They do not develop or stimulate anything. ‘

Ms Ignatieva called on the authorities to ban Rodionova’s training. 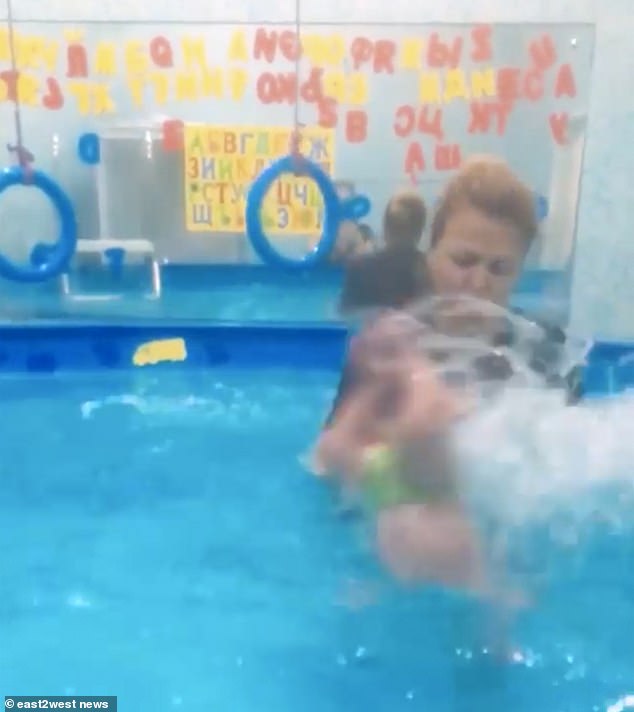 Apart from teaching children, she has also trained other coaches to work in Germany, Spain and Russia

The coach has trained other teachers to work in Germany and Spain, reports say.

She has also trained at least 50 coaches in Russia to work in 17 swimming centres.

She told her supporters: ‘We and especially parents do not need the ‘professional’ advice to give birth, and raise children.’

‘We, with the parents of our children, will decide for ourselves how to do things.’