Damascus: Syria said an Israeli attack against a military post in the country's south on Monday killed a soldier and injured another. Israel, in a rare statement acknowledging firing into Syria, said it was responding to an anti-aircraft fire from Syria against one of its combat planes. 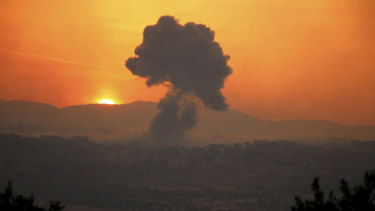 The back-to-back statements come amid heightened regional tension over Iran's role in Syria and other parts of the Middle East. They also follow a number of reported Israeli strikes on Syria in the past ten days, according to state run media.

Israel does not usually comment on reports concerning its strikes in neighbouring Syria, though it has recently acknowledged striking Iranian targets there.

Syrian state TV al-Ikhbariya quoted a military official saying that the Israeli attack came shortly after 2100 local time and targeted a military outpost east of Khan Arnabeh, a town in Quneitra on the edge of the Israeli- occupied Golan Heights.

An earlier statement on state media said one military vehicle was also damaged when a rocket landed in Tal al-Shaar in Quneitra.

Israel said it was responding after an anti-aircraft fire from Syria targeted one of its combat planes in Israeli airspace.

A statement from the Israeli army said that earlier Monday a Syrian anti- aircraft system fired at one of its aircraft "as it was carrying out a routine flight in Israel. The projectile landed in Syrian territory. In response, we targeted the Syrian launcher that was responsible for firing it."

The Israeli military "sees any threat against its aircraft with great severity and takes measures to defend them."

"Our policy is clear – we are not prepared to tolerate any aggression against us, we will retaliate against it forcefully and decisively," the statement said.