Home » World News » Tanker attacks: Was it Iran, and will it lead to war?

Tanker attacks: Was it Iran, and will it lead to war?

The United States has accused Iran of being involved in an attack on two oil tankers in the Gulf of Oman.

Iran has denied the accusations, describing them as “alarming”.

:: Who attacked the tankers?

The most likely culprit is Iran. The tankers were attacked off the Iranian coast and Iranian vessels were reported in the vicinity. The Iranian Islamic Revolutionary Guards Corp has form, having attacked shipping in the past. But it is possible the attacks were carried out by Iran’s enemies and made to look like it was responsible. Tehran says it has been framed.

:: What’s the background to all this?

Tensions in the region have become heightened. Iran’s enemies in Saudi Arabia, the UAE and Israel have been urging Washington to take a tougher line with Iran and could benefit from a confrontation between the US and Tehran. They have a motive but there is no evidence any of those countries were involved.

Most likely, yes. Iran warned last month that if newly strengthened US sanctions made it impossible for it to sell its oil and export it through the Strait of Hormuz, it would make it impossible for others too by blocking the vital stretch of water. Iran may be flexing its muscles to prove it can do just that. But it is likely to do so while maintaining plausible deniability, covering its tracks and fiercely protesting its innocence.

The Strait of Hormuz is arguably the most sensitive and strategic stretch of water in the world. A fifth of the world’s oil passes through a passage only 21 miles (34km) wide, flanked by countries which are historically bitter enemies. A maritime oil pipeline is running along one the world’s most strained geopolitical fault lines. It requires assiduous diplomatic management. That’s currently in short supply. 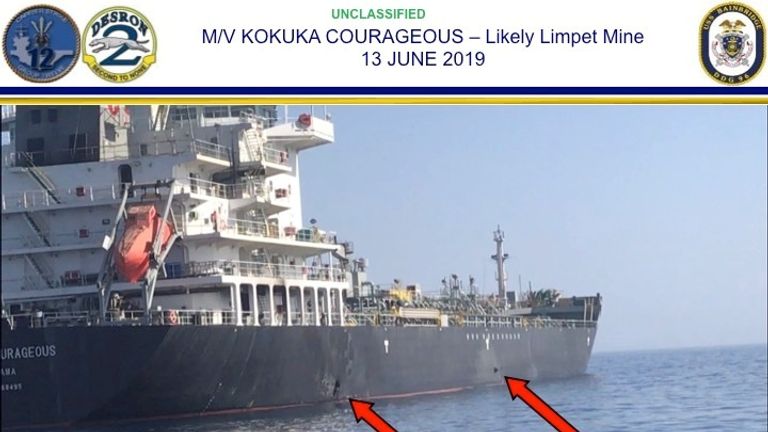 America says Iran was to blame for these attacks and those on four other tankers last month. The UK says it is inclined to agree. If so, what will the West do about it? It cannot allow Iran to attack ships at will in such a key waterway, but any punitive action risks war.

Neither side wants it. Donald Trump campaigned for office saying he would end American military adventures in the Middle East. He can hardly afford to go back on his word a year and a half before the next US presidential election. Iran is economically beleaguered and would be outgunned in any conflict with the West and its Sunni Muslim neighbours. But wars can happen by misunderstanding and miscalculation. The longer this goes on, the more of a possibility it becomes. 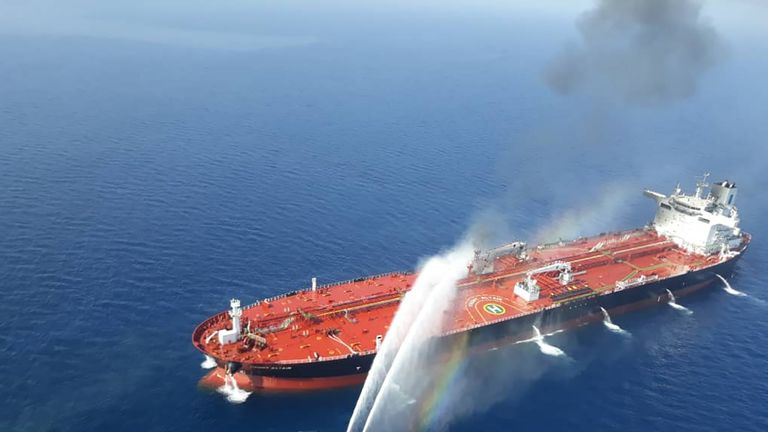 Tensions started rising as soon as Donald Trump pulled the US out of the Iranian nuclear deal, which was agreed after years of tortuous negotiations. Iran says the US can no longer be trusted – and with considerable justification. The US says the deal was too lenient on Iran and allowed it to continue destabilising the region unpunished. Increasingly severe US sanction have made life tougher and tougher for the Iranians. They are also incensed that the Islamic Revolutionary Guards Corp has been branded a terrorist organisation. The Iranians increasingly have nothing to lose from stepping up their destabilising activity and threatening nuclear blackmail.

:: Can Donald Trump stop them if that carries on?

He is already using almost all his non-military levers through sanctions and diplomatic pressure. Military options remain open to him but using them would come with enormous risk for America, its allies and the global economy. The ball is in his court.