London: A teenager who plotted an Anzac Day terror attack in Australia from his bedroom in England will be released from prison five years into a life sentence.

The boy became the youngest Briton ever convicted of terrorism when, aged just 14, he encouraged Australian jihadist Sevdet Besim to attack a 2015 memorial parade in Melbourne and behead a police officer. 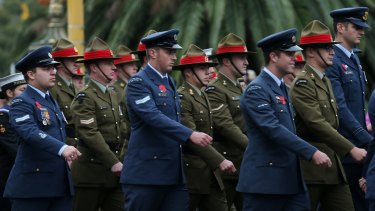 Authorities discovered thousands of messages between the pair just weeks before Anzac Day that year and police swooped on Besim, who was later sentenced to 14 years' jail.

The case made international headlines because of the British teen's age and a bizarre discussion between the two conspirators about whether to pack a kangaroo with explosives and set it loose on police.

The High Court granted the British boy a rare and controversial lifelong anonymity order in 2019 over concerns naming him would have a "profound impact on his psychological well-being", potentially undermine his rehabilitation and intrude on the right to privacy granted under the European Convention on Human Rights. He can only be identified as RXG.

The UK Parole Board has now concluded the 20-year-old is suitable for parole and will be released from prison after serving his minimum five-year term.

"Evidence was presented at the hearings regarding RXG's progress and conduct during this sentence," the board said in its published judgment.

"He had undertaken extensive specialist work in detention to address his offending behaviour, his understanding of Islam and to develop his level of maturity."

The judge who initially convicted RXG in 2015 said the extent to which terrorist group ISIS had radicalised the teenager online was "chilling" and described him as a "deeply committed radical extremist".

RXG gave evidence to the parole panel, as did prison officials, staff from the Youth Criminal Justice Service, an Imam who has worked with him, two psychologists employed by the prison service and a psychiatrist commissioned by RXG's lawyer.

In his five years in prison, RXG had undertaken "extensive" work to address his offending behaviour, his understanding of Islam and to develop his level of maturity.

Witnesses at the hearings recommended that RXG be released and accepted that all necessary work had been completed, the parole board said.

"No one at the hearing considered there to be a need for further time within the custodial estate," the board said.

He will have to live at a designated address, be of "good behaviour", be fitted with an electronic tag and other forms of monitoring, comply with limits on who he can meet and talk to, and meet restrictions on his use of electronic technology. He will also be subject to a curfew.

Besim was initially jailed for 10 years and required to serve a minimum of 7½ years before being eligible for parole. The term was extended to 14 years, with a minimum of 10½ years behind bars, after a community backlash to the original sentence. 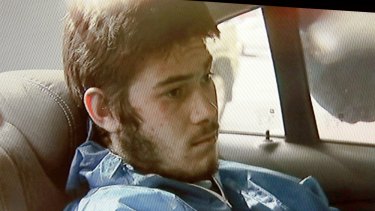 Khan was released from prison on parole halfway through a 16-year sentence for plotting to establish a militant training camp and blow up the London Stock Exchange. 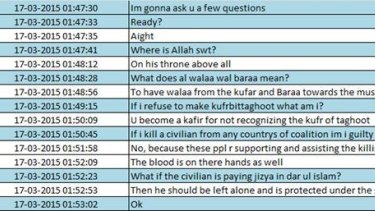 Summaries of messages UK police allege were exchanged between the boy and his Australian contact.Credit:Greater Manchester Police

A spokesperson for the parole board said decisions were "solely focused on what risk a prisoner could represent to the public if released and whether that risk is manageable in the community".

"Parole reviews are undertaken thoroughly and with extreme care," the spokesperson said. "Protecting the public is our number one priority."