Austin: Texas Governor Greg Abbott posted a picture of himself playing a violin at what appeared to be a partisan political event, as coronavirus cases surged in the state’s central region, straining intensive care units.

On Sunday, the same day Abbott posted the pictures, ICU wards in a five-county area that includes the state capital of Austin neared capacity with 184 COVID-19 patients. That number was close to the 200 ICU total beds available in the hospitals.

During the previous peak of the pandemic, 190 patients were in ICU beds in the region.

Abbott’s pose didn’t escape the attention of critics on Twitter who made comparisons to the Roman emperor Nero who, according to legend, fiddled as the city-state burned in an act of brazen disregard.

Johns Hopkins coronavirus data shows that Texas has registered 222, 428 new coronavirus cases in the past month, resulting in 1094 deaths. 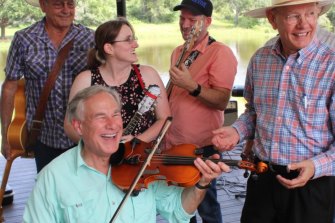 Available hospital space for COVID-19 patients in the Austin area continued to be a source of anxiety. An automated phone message distributed by the city encouraged residents who have not received a vaccination to “not wait to get one.“

The warning also recommended staying home and wearing face coverings in the presence of others.

“The COVID-19 situation in Austin is dire. Health care facilities are open, but resources are limited due to a surge in cases,” the message warned in English and Spanish.

Adler’s issue with Abbott comes amid the emergence of the Delta variant, which is thought to be more highly transmissible and more severe compared with variants that circulated earlier in the pandemic.

“Our current crisis could have been avoided if Gov. Abbott had not barred local government authorities from issuing mandates on masking,” Adler said. “Our hospitals are strained. It is vital that everyone gets vaccinated and wears a mask.”

Including ICU and non-ICU patients, 510 COVID-19 patients were hospitalised as of Friday in the five-county area of Bastrop, Caldwell, Hays, Travis and Williamson.

Health officials continue to say that the vast majority of COVID-19 hospital patients are unvaccinated or have received only one of two doses of the vaccine. In Travis County where Austin is located, about 64 per cent of residents 12 years and older are fully vaccinated and 74 per cent of that same population has received at least one dose, according to data from the Texas Department of State Health Services.

The vaccine has been available to most residents in the area since late April and early May.

The grim outlook is also captured in new modelling released last week by researchers at the University of Texas.

It placed the chance of reaching ICU capacity by the end of August at 92 per cent, if community mitigation efforts do not slow transmission.

Likewise, the report says if transmission is not slowed, a school with 100 in-person students would have a 94 per cent chance that at least one of those students would arrive infected on the first day of school August 23.

The UT researchers say they reached those conclusions by considering a number of factors, including the emergence of the delta variant, the ongoing rollout of the vaccines, the start of the school year, and various levels of social distancing and mask usage across Austin and within schools.

Abbott, in his post on twitter, thanks the “patriots doing their part to keep Texas RED!” (or voting for Republicans). “A great day in Austin county!”

TNS with The Age/Sydney Morning Herald