A tour guide has been captured on film pinning a baby elephant down into the sea so a bikini-clad tourist can take pictures.

The mahout dragged the calf into the ocean in Phuket, southern Thailand, on May 14, after the two holidaymakers paid for rides.

One man was seen taking selfies while sitting on top of a fully grown elephant which was knee deep in the clear blue water. 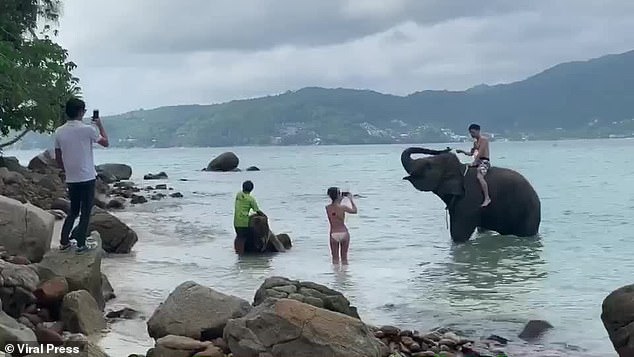 The cruel incident took place in Phuket, southern Thailand, on May 14 as one tourist sat on top of an adult elephant and another took photographs of the calf 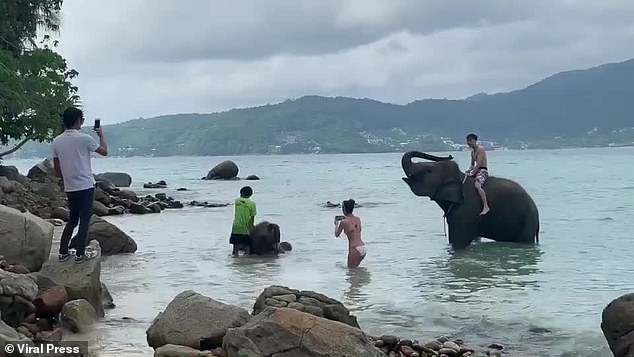 A female holidaymaker in a white bikini then took pictures of the baby elephant.

The nervous creature appeared to uncomfortable in the water but the mahout put his hands on the elephant’s neck and pushed it down into the sea.

As the calf waved its trunk in apparent discomfort, the mahout puts his hand on the creatures head while continuing to pin it down into the sea.

The cruel behaviour was an attempt to keep the calf still so the tourist can take a picture of it in the sea.

She snaps the elephant then turns the camera towards her partner, who is riding the other elephant.

The scene sparked anger from animal rights campaigners who said that taking the elephants into the sea had also damaged coral reefs in the area. 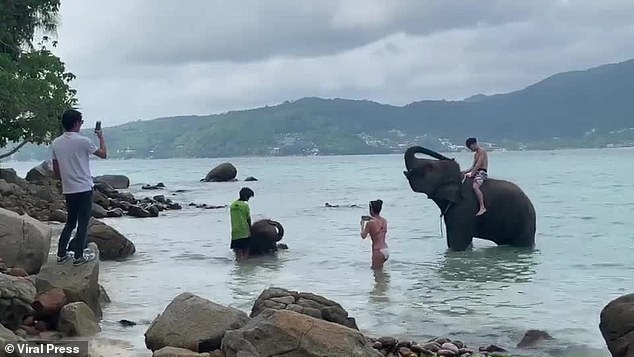 Thammarat Suwannaposri from Spotlight Phuket said: ‘The herd were the part of tourist attraction organised by a restaurant nearby and they didn’t ask the permission to do so.

‘The beach is very rocky but it is full of the old coral reef which was not allowed to be demolished according to the law. But they brought a digger to clear the area, so that those elephants could go in the water and pose for pictures with tourists.

‘What they did was considered illegal and they should be punished for destroying the environment.’