This refilled bottle of Pappy Van Winkle’s 15 Year Old Family Reserve bourbon is part of the collection of counterfeits kept by Adam Herz, a whiskey expert in Los Angeles.Credit…Rozette Rago for The New York Times

To the casual eye, there was nothing amiss about the bottle of whiskey sitting on a shelf at Acker, a wine store on the Upper West Side of Manhattan. But for anyone who knew what to look for, the warning signs were clear.

The whiskey, a bourbon called Col. E.H. Taylor Four Grain that Acker was selling for about $1,000, normally came packaged in a special cardboard tube; this one sat there tubeless. Its strip stamp, attached over the top of the cork, was on backward.

Still, when a producer from the TV news program “Inside Edition” asked in April about the bottle’s authenticity, the store assured him it was legitimate.

The producer bought the whiskey, then took it to Buffalo Trace, the Kentucky distillery that makes the Col. E.H. Taylor line of bourbon, for chemical analysis. The bottle, it turned out, was fake: It had been refilled with cheap whiskey and resealed, then sold to Acker as part of a private collection.

The store said it had already pulled several bottles from the collection off the shelf, and offered refunds on bottles it had already sold. But that didn’t stop “Inside Edition” from featuring the incident in an eye-opening news report a few weeks later.

It was just the latest high-profile example of what distillers, retailers and consumers describe as a growing problem for the bourbon industry and its millions of enthusiasts. Over the past few years counterfeiting, long a problem for purveyors of fine wines and single-malt Scotch, has come to American whiskey.

“We’ve had fans from across the U.S. contact us to tell us they’ve been duped,” Mary Tortorice, general counsel for Sazerac, the company that owns Buffalo Trace, said in a statement in September.

The scammers are finding fertile ground. “Luxury bourbon” was once an oxymoron; now, it’s the hottest thing in whiskey. Domestic sales of super-premium American whiskey — bottles valued over $50 — nearly doubled from 2016 to 2020, to four million cases, compared with an average growth of 30 percent for all American whiskeys, according to the Distilled Spirits Council of the United States.

At the very high end, where bottles sell for $500 or more, demand has vastly outstripped supply, creating long lines at liquor stores and a robust secondary market, mostly within private social-media groups. Trading or selling in such groups is illegal, though some places, including Kentucky and New York State, are starting to loosen their laws to allow private collectors to sell through an auction or to licensed retailers like Acker.

The disruptions caused by the pandemic have also created a new cohort of swindlers, some driven by economic desperation, others by boredom. And it has spawned a new pool of victims, as bourbon drinkers stuck at home with disposable income join the collecting fray, eager to show off their latest trophy.

“Part of the problem is the culture I see around bourbon, where it is about bragging rights and being able to Instagram a bottle you just bought,” said Adam Herz, a whiskey collector in Los Angeles and an expert in counterfeit bottles. “Most people I see ending up with fakes are partly to blame themselves. Any good con man knows how to take advantage of someone’s greed.” 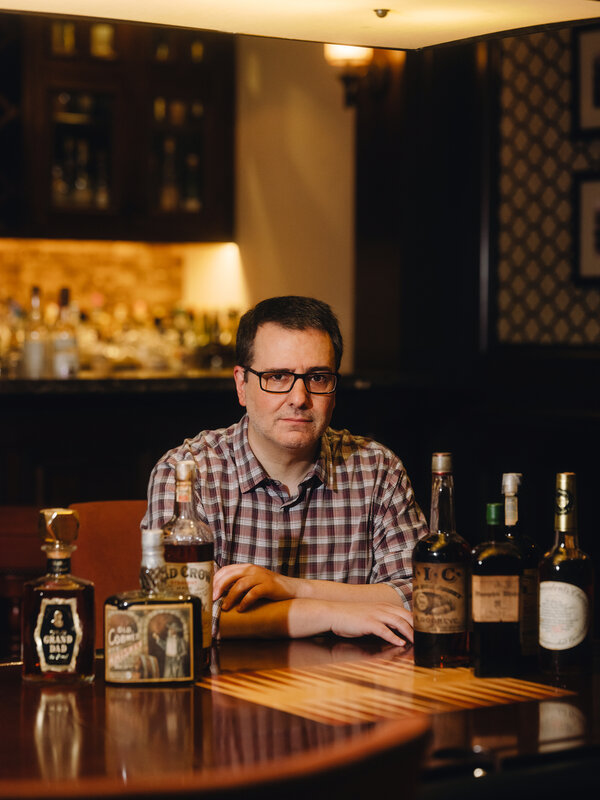 Bourbon in 2021 is, in other words, a counterfeiter’s dream, shaped by enormous demand, limited supply and a steady inflow of new and naïve fans all too willing to part with their money — and unlikely to go to the authorities when they realized they’ve been swindled in a transaction that is by definition illegal.

To make the deception even easier, most distilleries are only slowly taking action. Few are willing to admit the problem publicly, for fear of encouraging counterfeiters and discouraging interest in their own, legitimate products. Many still package their bottles with common shrink-wrap seals, despite the ease with which such closures can be faked.

Even speaking publicly about phony bottles poses a dilemma. Because both the barriers to counterfeiting and the penalties for getting caught are so low, any discussion of fake whiskey may push more people to try their hand at it — or, if they’re already involved, give them tips to improve their game.

Mr. Herz said he is regularly contacted by people posing as would-be whiskey buyers, asking if he can tell them whether a particular bottle is fake — when, in fact, he suspects they’re scammers looking for his unwitting advice on how to improve their technique.

“To realize you inspired a faker is just awful,” he said.

Mr. Herz, who by day works as a Hollywood producer and is best known for creating the “American Pie” franchise, first grew suspicious about fake bourbon around 2016, when he started noticing that empty bottles of high-end whiskey were selling briskly online.

“What bothered me was all the empty Pappy Van Winkle bottles for sale on eBay,” he said. “I said, ‘What do you think all these people are buying the bottles for?’”

Each bottle of Pappy Van Winkle, a coveted brand that often fetches more than $5,000 on the secondary market, comes with a unique identification code. Mr. Herz was able to read the number in a photo of an empty he found on eBay.

He then went to one of the countless private bourbon fan groups on Facebook, where people buy and sell brands like Pappy. Within a few minutes, he said, he found the once-empty bottle, refilled and resealed, on sale for thousands of dollars.

At that time, few brands beyond Pappy Van Winkle commanded the sort of prices that might justify the effort to counterfeit them. But over the last five years, as wealthy collectors started snapping up rare and prestigious bottles, more than a dozen other brands began to skyrocket in price, especially on the secondary market, drawing scammers’ interest.

Many of those whiskeys, like Pappy Van Winkle and Col. E.H. Taylor, are made by Buffalo Trace, including George T. Stagg, W.L. Weller 12 Year and Double Eagle Very Rare. Five years ago a bottle of Blanton’s Single Barrel, another Buffalo Trace brand, cost about $65 at retail in New York City; it now sells for up to $1,000 on the secondary market.

There’s also an increasingly brisk demand for bourbons made by other distilleries, among them Michter’s, Willett and Brown-Forman. And there is a small but passionate trade in so-called dusty whiskey, bottles that might have sat on a liquor-store shelf for decades, when bourbon was déclassé, but are now suddenly unicorns. Dusties, as they’re often known, are especially easy to fake because they usually come with screw tops, and because most consumers are unfamiliar with their packaging.

The American counterfeit trade is still a few years behind the market for counterfeit single-malt Scotch, where fakery has a much longer and more sophisticated lineage.

Isabel Graham-Yooll, the director of Whisky.Auction, an online auction website, said that worldwide, counterfeit Scotch has long been a thriving business, often run by organized crime and focused on volume, churning out thousands of outright fakes and knockoffs with deceptively familiar names — James Walker, for example, or Cutty Stark.

Most of that high-volume, low-value trade takes place in developing markets, where demand for Western luxury goods is strong and regulatory oversight is weak.

A different problem confronts the makers of high-end single-malt Scotch and bourbon. Much of the counterfeiting is done by small groups or individuals, and bottles may pass through several unsuspecting hands before they reach the expert eyes at auction houses. (To make matters harder for auctioneers like Ms. Graham-Yooll, private trade in bottles is largely legal in Britain.)

“I saw one collection that was in its entirety fake, and it had all been gathered 20 to 30 years ago,” she said. “There are some really well-known fakes that keep popping up.”

Reliable statistics on the size of the problem are hard to come by. Ms. Graham-Yooll dismissed as hyperbolic a 2018 study claiming that up to one-third of all rare single-malt bottles were fake. But she conceded that fakery is a sizable problem, and growing worse.

There is no shortage of anecdotes like the encounter at Acker. In 2017 a Swiss hotel drew notice for selling the world’s most expensive dram to a Chinese tourist. Subsequent analysis of the liquid, which was purported to be a single-malt Scotch made by the Macallan distillery in 1878, showed that it was a blended Scotch made sometime after 1970.

Like the Acker bottle, the fake Macallan had flaws obvious to an expert eye: the wrong cork, modern glass. In part because the field of counterfeiting is so new, Mr. Herz said, it’s not hard to spot counterfeits — drip stains on a paper label, for example, are a good indication that the bottle has been used before.

“Most people are lazy and impatient,” he said.

The whiskey trade has yet to see its version of Rudy Kurniawan, the prolific, highly skilled counterfeiter whose 2013 conviction for making and selling millions of dollars’ worth of precisely detailed fake Burgundy and California Cabernet rocked the wine world.

But it may be only a matter of time. Experts say they have seen an increase in the quality of counterfeits; Mr. Herz suspects that at least a few counterfeiters have inside connections at Kentucky distilleries, allowing them to build fake bottles from scratch, with pristine labels and expertly crafted closures.

A cottage industry has popped up in response, especially in Britain, promising high-tech countermeasures like through-the-glass chemical analysis, which allows sellers and collectors to assess a bottle’s authenticity without having to open it. But those are still in development, and years away from widespread use.

Easier solutions already exist. The Macallan, among other distilleries, has started to place holographic images on its seals. Ardnamurchan, another Scottish distillery, is adding QR codes to its labels, allowing retailers and consumers to check for authenticity with their smartphones.

In October, Buffalo Trace placed security tags inside the aluminum caps on some bottles in its highly sought-after Antique Collection line; scanning the tags with a special app will tell you if, and when, the bottle has been opened before. It’s a start, but such tags work only when a bottle has been opened — so it’s no help for retailers or collectors who want to hold on to it for a while.

For now, the best, if imperfect, response is for buyers to change their expectations when hunting for a good deal. Simple rules apply: Do your homework. Never trust a pushy stranger, especially online. And always be willing to pass on a bottle that looks too good to be true, because it probably is.