While many Victorians will want to forget about the coronavirus pandemic this Christmas, a dancefloor anthem featuring Premier Daniel Andrews has spawned some very 2020 light displays on two sides of the city.

Each night Grange Road in Sandringham, a normally quiet suburban street, briefly takes on a nightclub vibe at 10pm as number 63 lights up to the tune of 'Get on the Beers’ – an electronica dance remix featuring snippets from Victorian COVID press conferences. 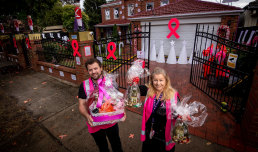 Michael created the light display for his mum, Glennis Eather, as a gift.Credit:Eddie Jim

From 7.30pm until 8pm, the house lights up to children's Christmas music played over loudspeakers, and also at a certain radio frequency to those driving by in their cars.

Later on, the main display features a variety of musical tastes: traditional Christmas songs, Mariah Carey, Snoop Dogg, Sia, The Weekend – and then at 10pm the main show: 'Get on the Beers'.

"We’ve had people wait up to an hour to see 'Get on the Beers'," said Mr Eather. “It’s been getting a lot of attention."

"I thought [the song] was kind of fitting for Melbourne and 2020 and thought I’d just get a bit of a laugh with the older crowd, but I didn't expect it to take off the way it did," he said.

The now-iconic pandemic anthem, created by Brisbane outfit Mashd N Kutcher during Victoria's first coronavirus wave, has been embraced in now re-opened nightclubs and at least one other home Christmas light display in Melbourne.

A home in Gillespie Road in Kings Park, west of Melbourne, has attracted huge online attention for its impressive 'Get on the Beers' display.

The man behind the light extravaganza, Minh Tuan Nguyen, has drawn fans and critics over the years for his annual music and light installations.

The trance-music fan told The Age in 2018 that it took 14 days to program each song to synchronise with his Christmas light show.

"There’s been people in their 40s and 50s who haven’t even heard the song and they're just in stitches thinking it’s the greatest thing," he said. "There's been no negativity. There are families with little kids that come out a few times a week for a dance and a bit of social interaction.

“We did a little gift pack to everyone on the street with earplugs, an eye mask and my number that said call me if you have any problems [with the display],” he said.

“We're another pack together in the spirit of the song and we'll send them a few beers."

Mr Eather said the night time shows are for a good cause: raising money for the Breast Cancer Foundation.

Mr Eather's mother Glennis was diagnosed in 2015 with breast cancer, and her two-year remission anniversary is partly what drove her son to restart the family tradition of installing Christmas lights.

While he's collecting cash in buckets outside the house, Mr Eather has also created QR codes for punters to donate online and is selling raffle tickets for hampers he has made.

Ms Eather said she was totally chuffed with the display, and all the funds raised.

"I’m absolutely so blessed to have him do this for me," she said.

END_OF_DOCUMENT_TOKEN_TO_BE_REPLACED

END_OF_DOCUMENT_TOKEN_TO_BE_REPLACED
Recent Posts
We and our partners use cookies on this site to improve our service, perform analytics, personalize advertising, measure advertising performance, and remember website preferences.Ok