The incredible jumbo return journey! Herd the one about the elephant family who baffled experts by going on a 300-mile rampage across China? Now they’ve suddenly packed their trunks for the long road home

No one knows quite why they set off in the first place. But after a 17-month jumbo journey that captured the imagination of people across the world — and continues to baffle experts — a 14-strong group of Chinese elephants is on its way home.

What possessed this adventure-seeking herd to turn around, having trekked 300 miles north, and finally head back towards their protected habitat in southwest China’s Yunnan province?

Perhaps they have realised that the grass — and bushes, tree bark, plants, roots and fruit — isn’t always greener on the other side. Or have finally got something out of their rebellious systems.

At any rate, they may miss the excitement. Along the way, they have plodded along motorways and through city centres and housing estates. They have rummaged in wheelie bins, drunk alcohol, bashed down garage doors and helped themselves to a private supply of water after managing to turn on the tap. All in all they have caused more than £1 million of damage, resulting in insurance claims of almost £800,000 — and 150,000 people have had to be temporarily evacuated from their homes along the migration route. 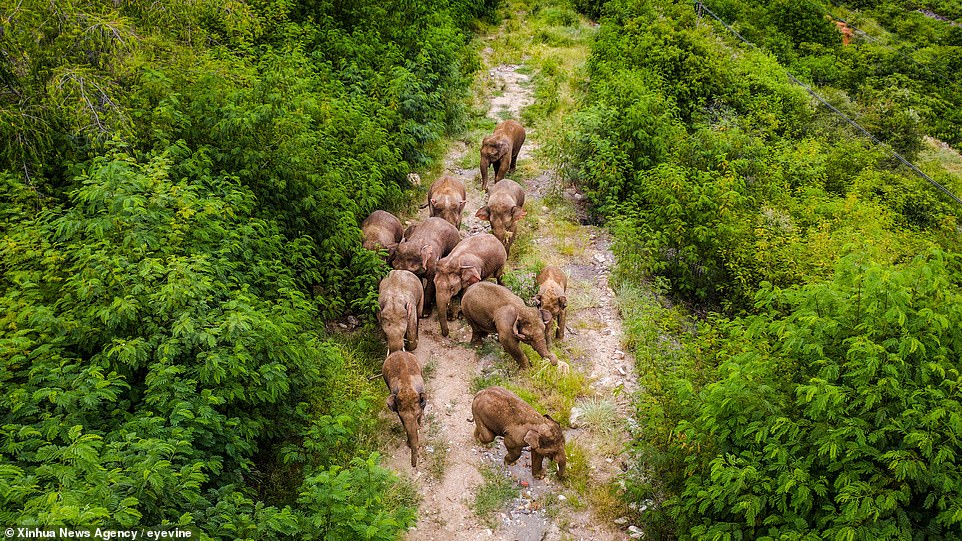 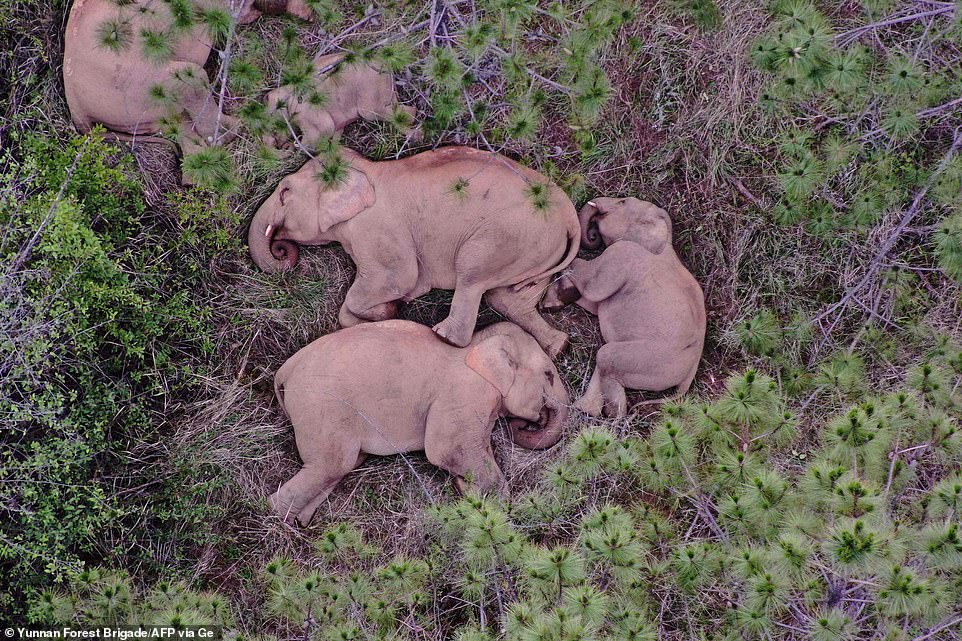 The elephants left their reserve in Xishuanbanna in China’s mountainous south west region on March 15, 2020 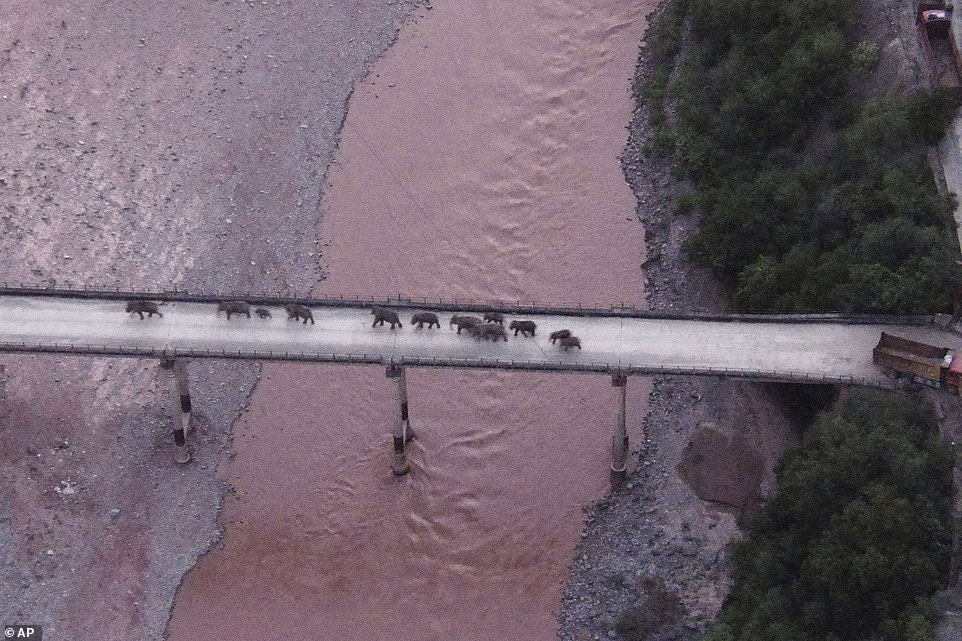 The trunk-swaying convoy set off on March 15 last year from their reserve in Xishuangbanna, in China’s mountainous south west near the borders with Laos and Burma, and headed north, followed discreetly by a determined convoy of 400 police officers and members of the emergency services, a fleet of vehicles, a small armada of drones and a lot of head-scratching boffins.

One expert, Yang Yingyong, a member of a committee set up to ensure the elephants came to no harm, said yesterday that their return was ‘scientifically planned’ but did not make it clear whether the planning was on the part of the committee or the highly intelligent jumbos. ‘We will strive to allow them to return to their habitat as soon as possible,’ Mr Yang added.

Maybe the animals are using some sort of internal compass, as migrating birds do. Or maybe their route is being skilfully directed by the Chinese authorities.

Whatever the explanation, elephants have mapped pathways based around sources of food, water and danger for centuries. The matriarchs of the herd use their remarkable memory to recall these migratory routes, leading their families to suitable feeding grounds with the changing of the seasons.

But in the case of the Chinese herd, we know human intervention is at work, too. When they approach a village, loudspeakers urge locals to shut themselves in — preferably upstairs, well out of reach.

Power supplies are cut to prevent the elephants electrocuting themselves or sparking fires, and vehicles are parked across roads behind the herd or on side routes to keep them moving forward.

The herd was photographed on Sunday night crossing a bridge over the Yuan river, near Yuxi city. This meant they were at last heading in the right direction. But they were still about 120 miles from home.

As these new photographs show, they have been hosing each other down, playing follow-my-leader and, charmingly, lending a supportive trunk when any of their number has struggled. One endearing image shows a baby elephant being helped up a slippery slope in Yuanjiang County; another captures the group spooning as they sleep on the ground in protective clusters. A third shows them jumbled together as they trek through scrubland foliage. 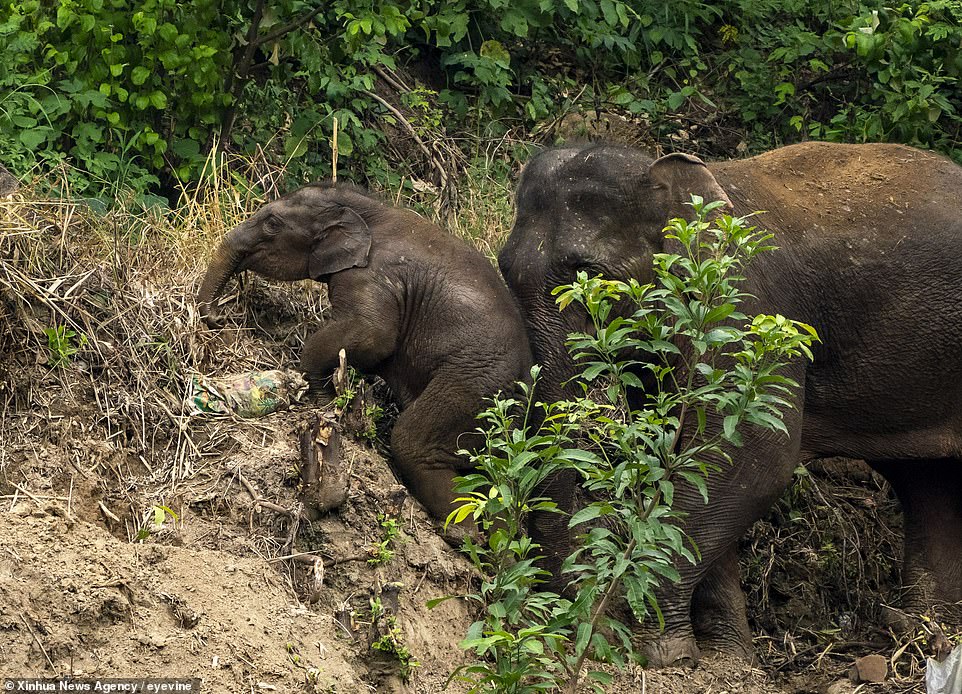 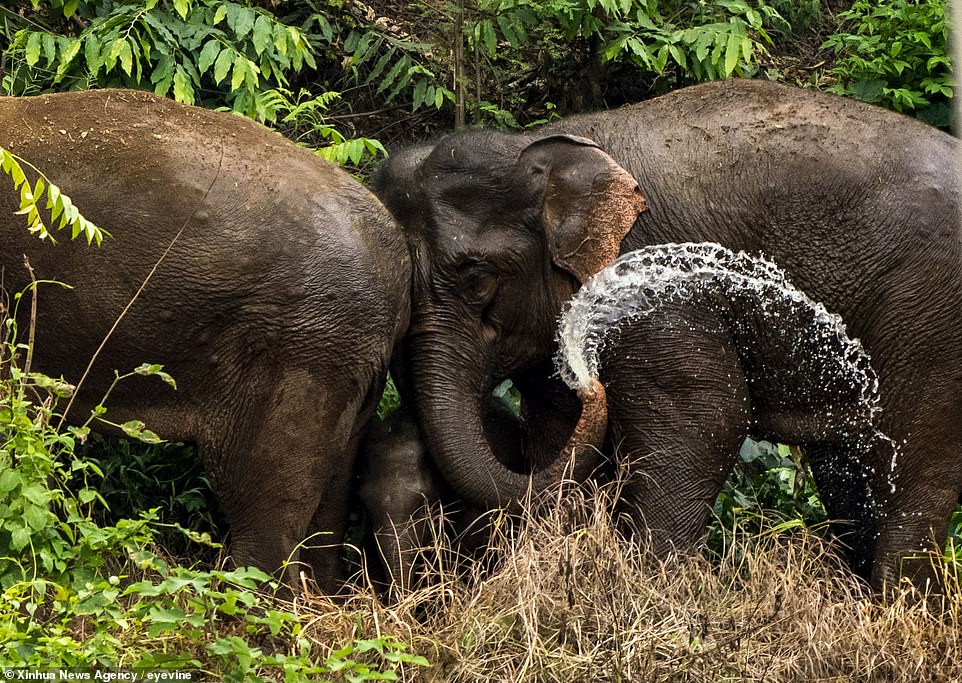 Becky Shu Chen, a leading conservationist at London Zoo, told the Mail that elephants have become prone to roam because of an increase in deforestation to clear land for mainly rubber plantations

Becky Shu Chen, a leading conservationist at London Zoo, told the Mail that elephants have become prone to roam because of an increase in deforestation to clear land for mainly rubber plantations.

‘We’ve seen elephants expanding their range for decades as their populations increase and they search for more food,’ she said. ‘But this movement to the far north does seem an unusually big expansion.’

According to Shen Qingzhong, from the Xishuangbanna National Nature Reserve Management Bureau, it’s ‘likely the elephants will head north again in future’.

And who can blame them? The travel bug is hard to shake off. There are always pastures new to explore. But such a trek is not something to be embarked on lightly, even for these heavyweight ramblers.