HUGE numbers of tourists have been cramming the Great Wall of China as the country declares it has conquered Covid-19 while the virus stricken UK faces lockdown misery.

These scenes are a far cry from the strict lockdown which was imposed on China when the killer coronavirus bug began spiralling out of control earlier this year. 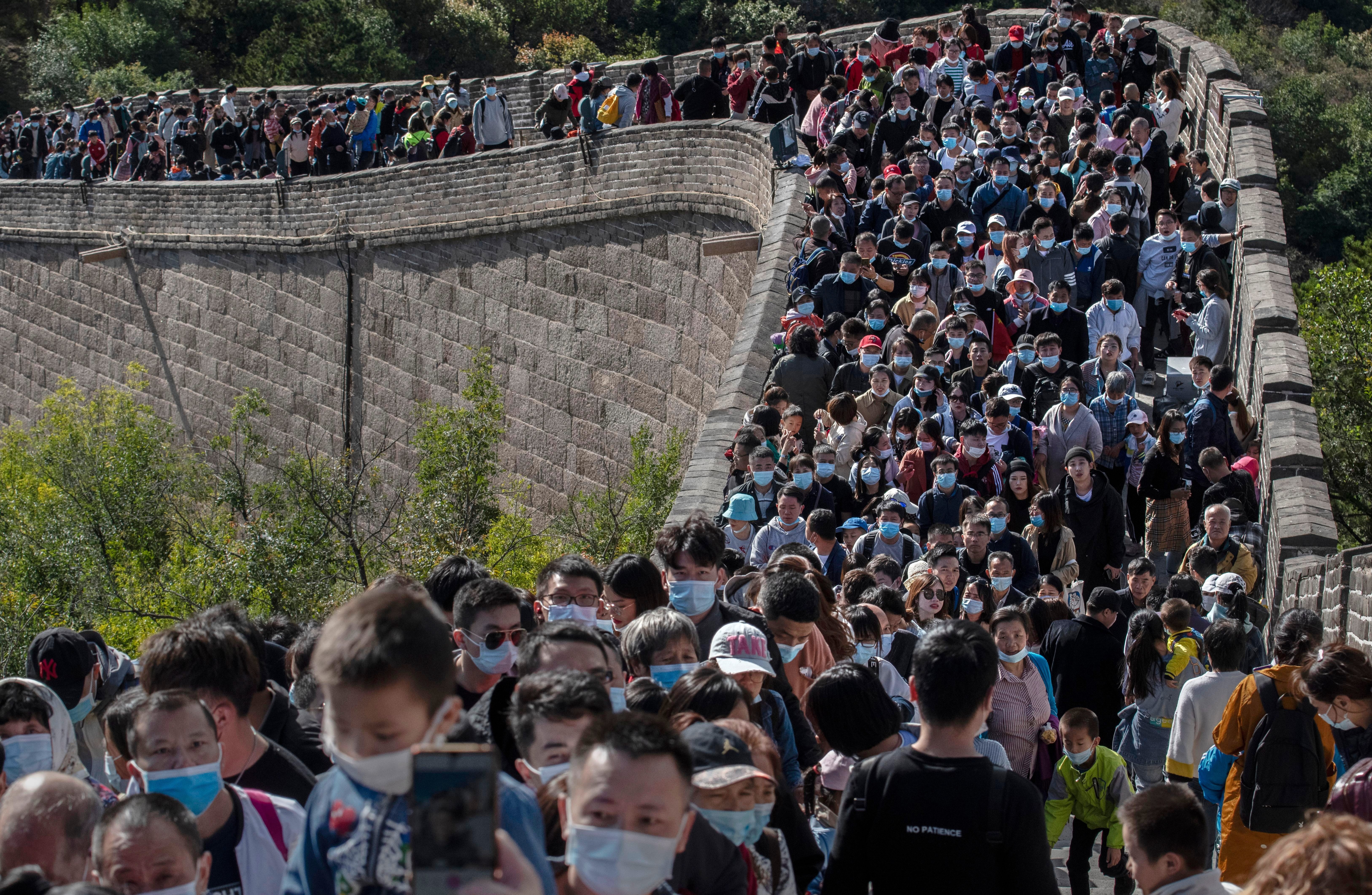 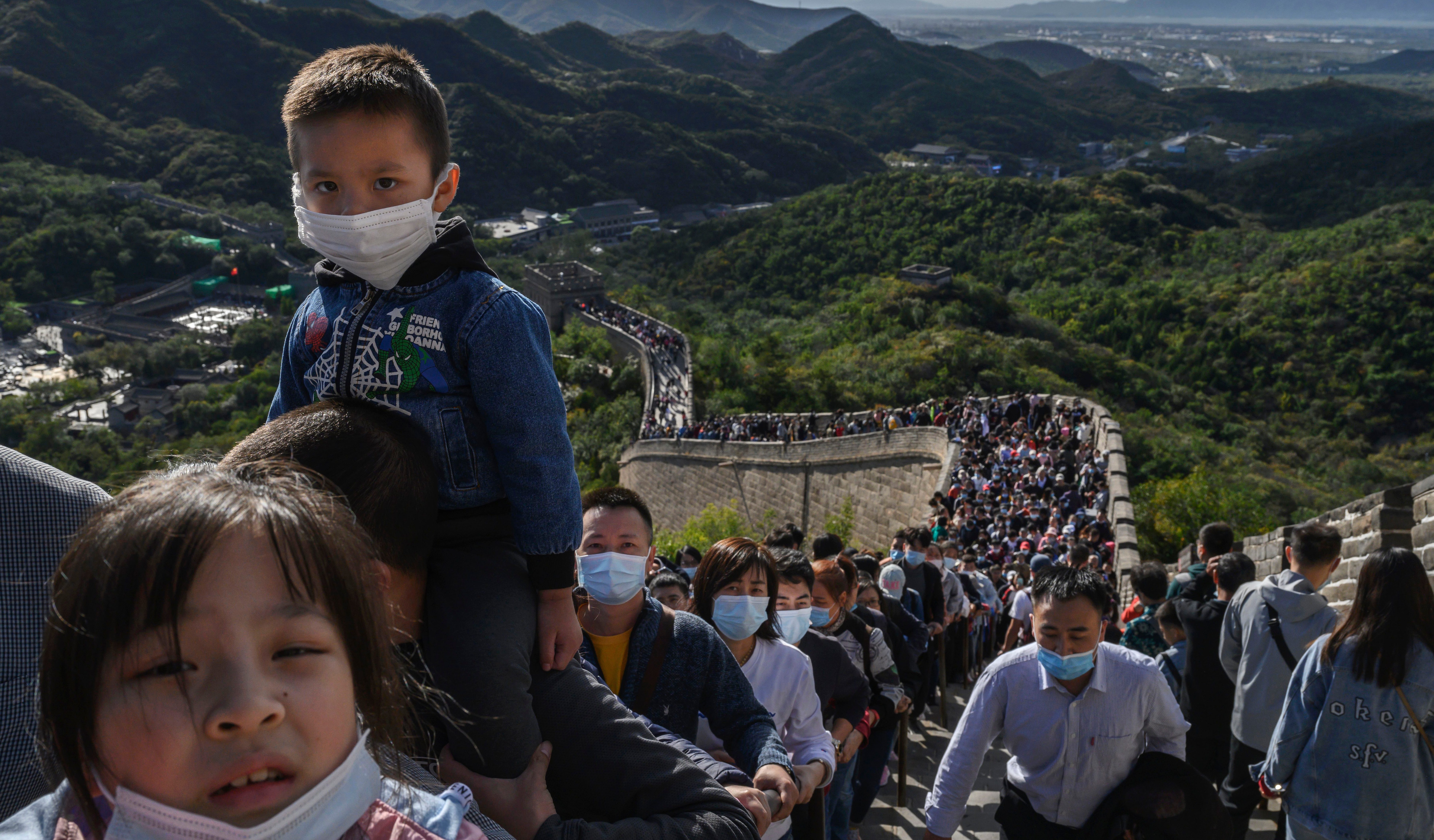 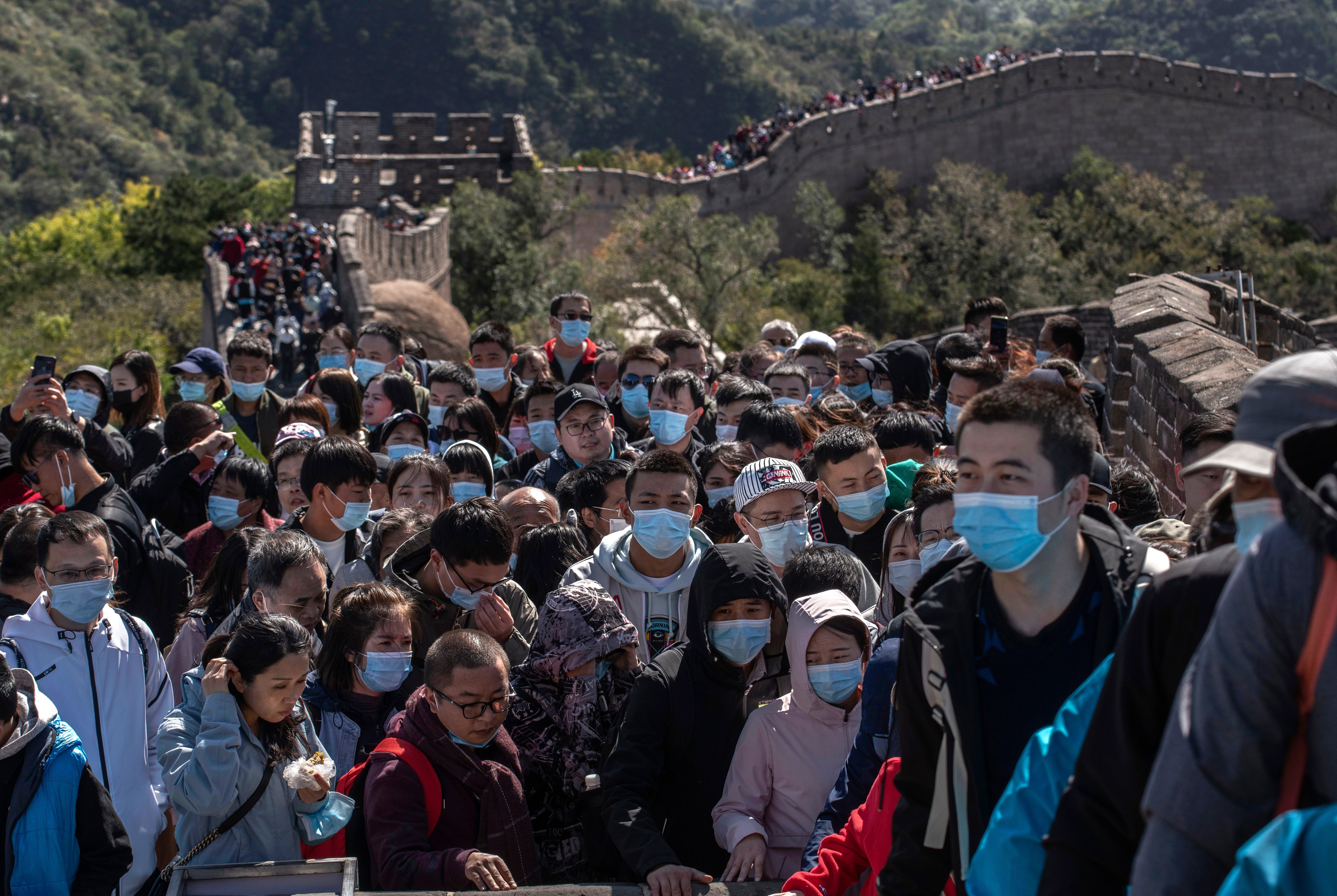 As Europe hunkers down amid a second Covid-19 wave, China is celebrating an eight-day holiday called Golden week.

The state-owned China Daily newspaper reported: "The holiday week travellers, estimated at more than half a billion, show China’s confidence and success in reopening the economy after a hard-fought victory over the virus."

Millions of people have been flocking to bus stations, airports and transit hubs to travel around the country for the holiday.

Meanwhile, tourist attractions like the Great Wall have been luring the tourists in with pictures emerging which show no social distancing.

Crowds are crammed together cheek-by-jowl along the winding wall and they squeeze past each other through narrow doorways.

Most are wearing face masks.

But a number of people, including young children, have pulled their masks down to their chin.

Some were not wearing any at all.

However, if the Chinese Communist Party is to be believed, there is little risk of catching covid.

Strict lockdown measures were lifted in April, including the covid ground zero in Wuhan in central China.

The holiday week travellers, estimated at more than half a billion, show China’s confidence and success in reopening the economy after a hard-fought victory over the virus

Officials claim the last reported virus transmissions within China were four patients who were found on August 15 in the northwestern city of Urumqi in the Xinjiang region.

All the cases reported since then were in travelers from outside the mainland.

China, the world’s most populous country and where the pandemic emerged in December, has reported 4,634 deaths and 85,578 cases, plus nine suspected cases that have yet to be confirmed.

After falling in the summer, coronavirus cases are on the rise as winter approaches, with northwest and northeast England seeing the steepest increases. 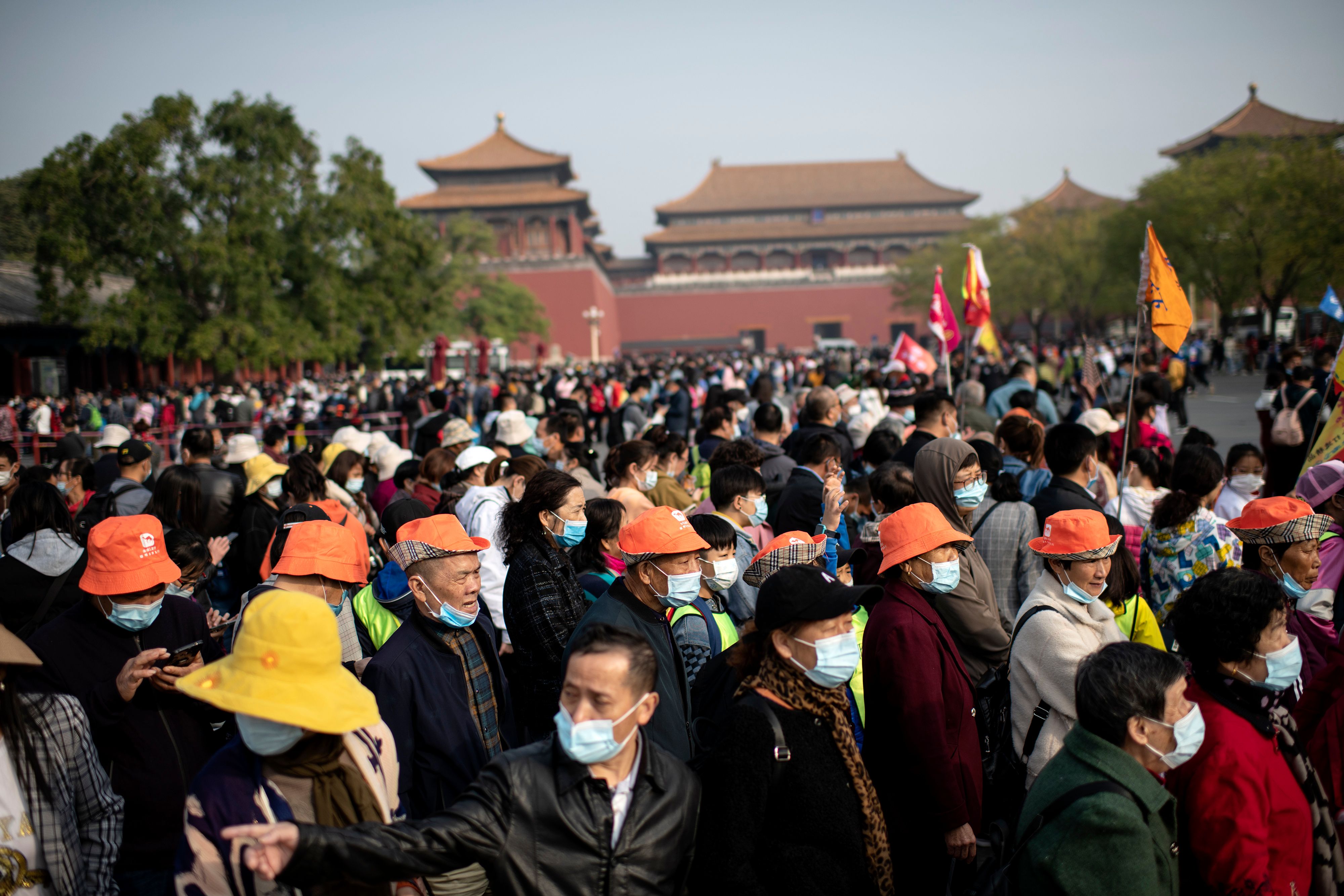 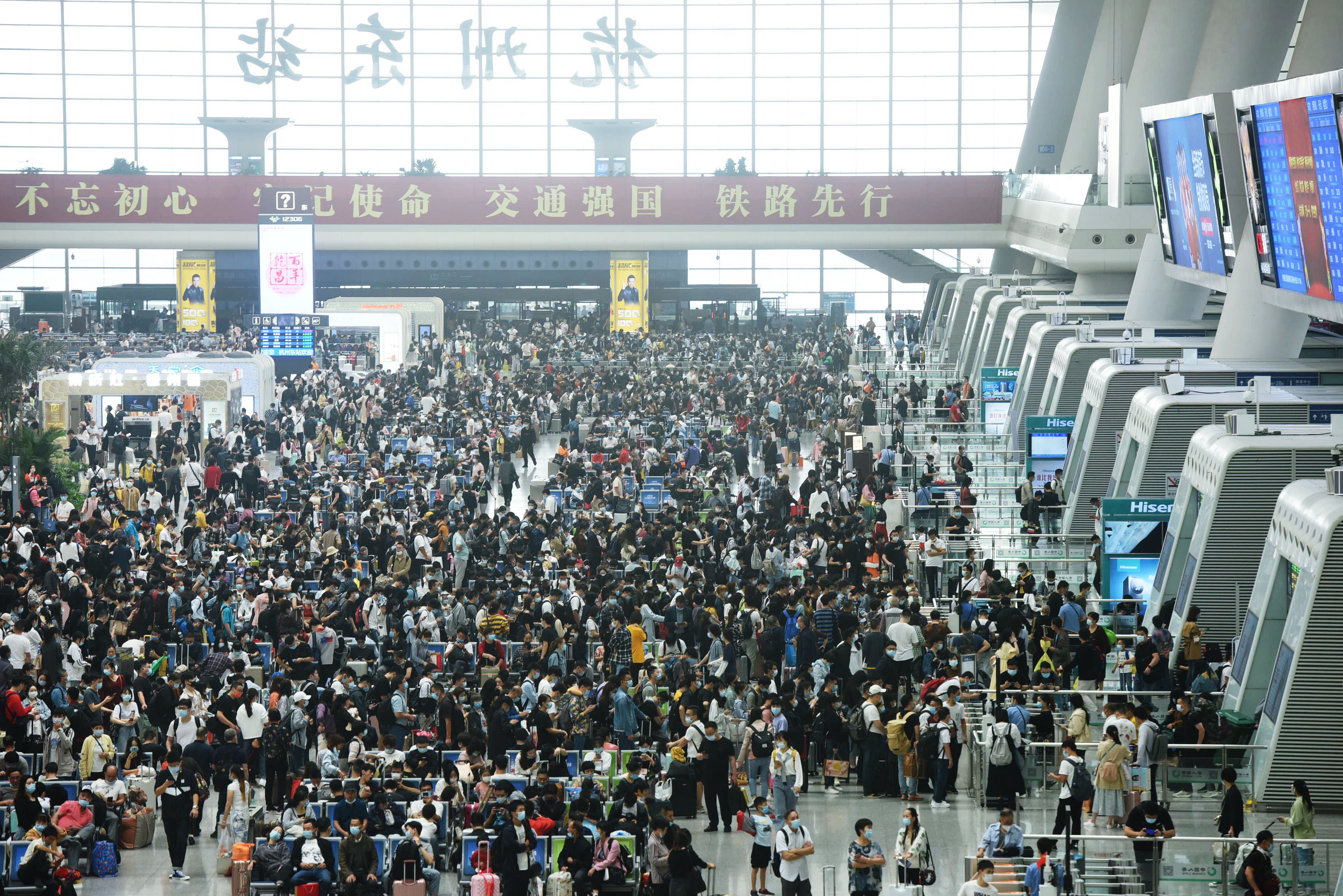 Pressure is building on NHS hospitals, with a steep rise in the number of people needing urgent treatment for coronavirus, senior government advisers have said.

England's deputy chief medical officer, Professor Jonathan Van-Tam, said that while cases are rising fastest in the North of England, it is of "concern" that they are "heating up" in more parts of the country compared with a week ago.

But while China officially boasts about beating Covid-19, the Chinese city of Qingdao said it will conduct tests for its entire population of more than 9 million.

It comes after the port city reported new cases that appeared to be linked to a hospital treating patients who had come from abroad.

END_OF_DOCUMENT_TOKEN_TO_BE_REPLACED

END_OF_DOCUMENT_TOKEN_TO_BE_REPLACED
Recent Posts
We and our partners use cookies on this site to improve our service, perform analytics, personalize advertising, measure advertising performance, and remember website preferences.Ok