A Tory split erupted today after Chancellor Philip Hammond warned that a target to slash the UK’s greenhouse gas emissions to zero by 2050 could cost the country £1trillion.

Theresa May and the favourite to succeed her, Boris Johnson, are among the senior Tories who have backed the goal – which was recommended by the Government’s advisory Committee on Climate Change (CCC).

It could mean emissions being largely eliminated from electricity generation, transport and heating, with a switch to renewables, electric vehicles and an end to traditional gas-fired boilers for heating homes.

Any remaining pollution by 2050 from areas such as agriculture and flying will need to be offset through measures to capture carbon, such as planting trees. 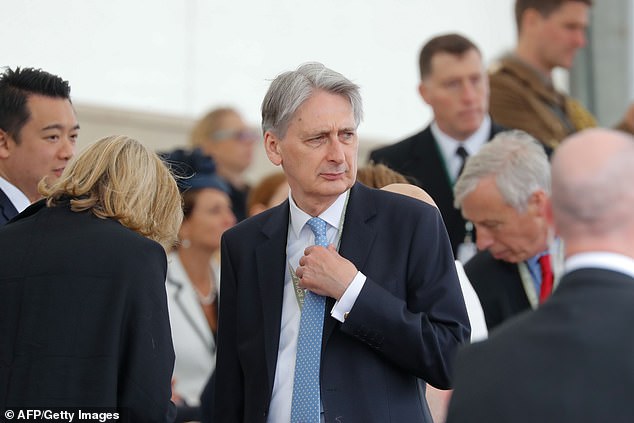 in a leaked letter to the Prime Minister, Philip Hammond (pictured at D-Day commemorations yesterday) said the total cost of moving to a zero-carbon economy is likely to be ‘well in excess of £1trillion 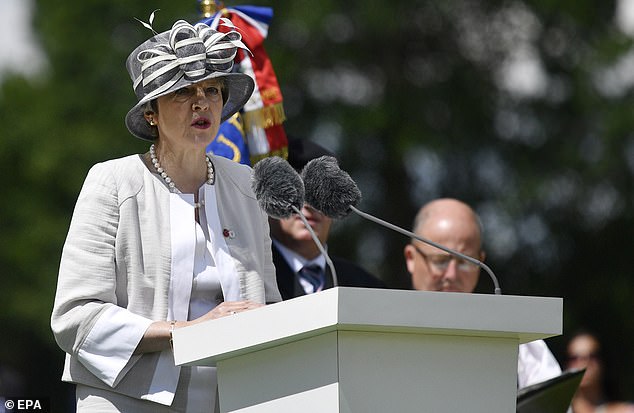 But in a letter to the Prime Minister leaked to the Financial Times, Mr Hammond said the total cost of moving to a zero-carbon economy is likely to be ‘well in excess of £1trillion’, and will have profound implications for households, businesses and the Exchequer.

While he voiced support for reaching ‘net zero’ as soon as possible, Mr Hammond warned that the UK was off track on meeting interim ‘carbon budgets’ to cut emissions, and a new target will require ambitious policies in this parliament.

This will require increased Government spending, reducing money available for other areas, and a review should be undertaken before a new legal target is set, according to the leaked letter.

The Treasury declined to comment on leaks, but it is understood the Chancellor is not blocking a move to net-zero emissions.

The PM’s official spokesman would not comment on the leaked letter, but said: ‘We committed to legislating for net zero back in 2016, we commissioned the report by the CCC to help shape our progress.

‘We have not published Government analysis of the costs.

No10 later said criticism of the targets did not ‘factor in the benefits or consider the costs of not doing this’, and stressed that the £1trillion was across the whole economy over a long period, rather than relating to government spending. 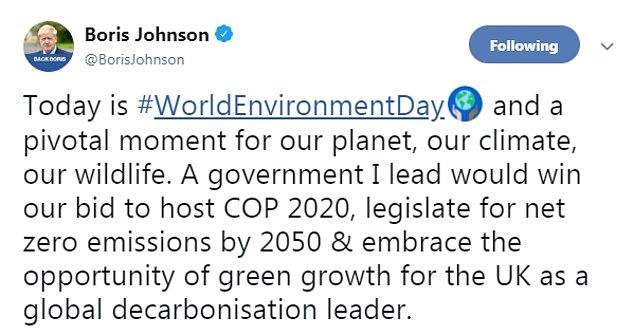 Mr Johnson tweeted yesterday: ‘Today is #WorldEnvironmentDay and a pivotal moment for our planet, our climate, our wildlife. A government I lead would win our bid to host COP 2020, legislate for net zero emissions by 2050 & embrace the opportunity of green growth for the UK as a global decarbonisation leader.’

Dr Doug Parr, chief scientist for Greenpeace UK, accused the Treasury of ‘putting their ideology before our well-being’ and failing to include the benefits of a switch to a net zero economy.

‘If you want to know whether a policy is a good idea, you include the benefits as well as the costs, and in this case the benefits include an economy fit for the 21st century, cleaner air, warmer homes and maximising the chances of civilisation surviving.

Shadow chancellor John McDonnell said: ‘We are facing a climate emergency and Philip Hammond clearly doesn’t get it.

‘The Tory Party is way overdue in adopting a target already put forward by Labour, and now the Chancellor is creating obstacles to prevent the action we desperately need to take.’