Washington: President Donald Trump attacked Robert Mueller in a tweet on Thursday, claiming that the former special counsel would have brought charges against him if he had any evidence – a characterisation directly at odds with what Mueller said in a public statement.

"The Greatest Presidential Harassment in history," Trump wrote on Twitter. "After spending $40,000,000 over two dark years, with unlimited access, people, resources and cooperation, highly conflicted Robert Mueller would have brought charges, if he had ANYTHING, but there were no charges to bring!" 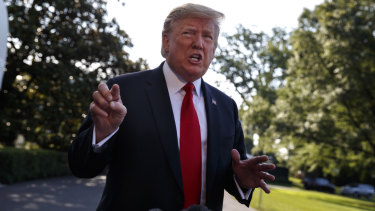 President Donald Trump talks with reporters before departing on Marine One for the Air Force Academy graduation ceremony.Credit:AP

Trump's comments came a day after Mueller said his office could neither clear nor accuse Trump of obstructing justice because of a long-standing Justice Department opinion that a sitting president cannot be charged with a federal crime.

Mueller's public remarks were his first since concluding a nearly two-year investigation into Russian interference in the 2016 presidential election and whether Trump sought to obstruct the probe.

In another tweet, Trump seemingly acknowledged for the first time that Russia had helped him win in 2016.

"Russia, Russia, Russia! That's all you heard at the beginning of this Witch Hunt Hoax," he wrote. "And now Russia has disappeared because I had nothing to do with Russia helping me to get elected. It was a crime that didn't exist."

Shortly afterward, however, he told reporters at the White House that Russia had not helped him get elected.

Speaking at the Justice Department on Wednesday, Mueller said his team found "insufficient evidence" to accuse Trump's campaign of conspiring with Russia to tilt the 2016 election but emphasised that investigators did not make a similar determination on whether the President obstructed justice.

Mueller said that if his office "had confidence that the President clearly did not commit a crime, we would have said so." And he noted that the Constitution "requires a process other than the criminal justice system to formally accuse a sitting president of wrongdoing" – a reference to impeachment by Congress.

Because of the Justice Department opinion, Mueller said that "charging the President with a crime was therefore not an option we could consider."

Hundreds of former federal prosecutors have opined that Mueller laid out sufficient evidence in his report to make an obstruction case against Trump. 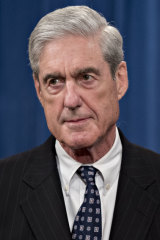 Trump’s comments came a day after Mueller said his office could neither clear nor accuse the US President of obstructing justice.Credit:Bloomberg

In his tweet, Trump did not elaborate on why he considers Mueller "highly conflicted." In the past, White House aides have pointed to an alleged dispute over membership fees at Trump National Golf Club in Northern Virginia.

In other tweets Thursday morning, sent before departing the White House for Colorado, where he is scheduled to address a US Air Force Academy graduation ceremony, Trump defended his aggressive pushback against Mueller's probe.

"So now the Dems and their partner, the Fake News Media, say he fought back against this phony crime that didn't exist, this horrendous false accusation, and he shouldn't fight back, he should just sit back and take it," Trump wrote. "Could this be Obstruction? No, Mueller didn't find Obstruction either. Presidential Harassment!"

Giuliani said Mueller's public statement "was halting and stumbling which demonstrated why he doesn't want to testify" to Congress about his report.

"But still the same conclusion: no case," Giuliani wrote. "Mueller proved he was as biased as his staff."