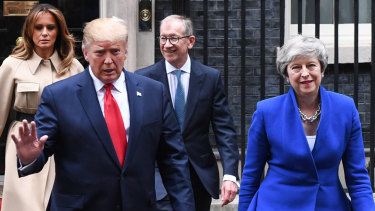 Trump spoke with leadership contender Boris Johnson on the phone, though Johnson reportedly turned down the offer of a meeting as it clashed with his plans to meet other MPs who will soon vote on the prime minister’s successor.

And the President spurned Labour’s Jeremy Corbyn, declaring the Opposition Leader a "negative force" and saying he decided to reject a request for a meeting because he preferred "people that get things done" rather than critics.

Trump and May – who will resign as party leader on Friday ahead of a leadership contest that will pick her replacement – held a press conference after a meeting at Downing Street on Tuesday. 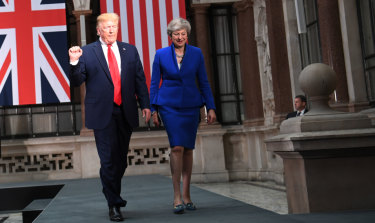 US President Donald Trump and British Prime Minister Theresa May arrive for a press conference in London on Tuesday.Credit:Bloomberg

Trump paid tribute to May as a "tremendous professional and a person that loves their country" who deserved a lot of credit for teeing up a Brexit deal with the EU.

However he added that he would have "sued the EU and settled" instead of pursuing a deal the way May had.

It is not the first time Trump has suggested using the courts to solve Brexit, though it is unclear on what grounds the UK could sue or in what court.

Trump said the US and UK had "the greatest alliance the world has ever known".

He played down a divide between the allies on Chinese mobile company Huawei, which the UK is considering allowing to tender for parts of the country’s 5G network against advice from Five Eyes allies, including Australia which is concerned about national security risks.

"We are going to have absolutely an agreement on Huawei and everything else," Trump said. "We have an incredible intelligence relationship and we will be able to work out any differences."

Trump said the US was committed to "a phenomenal trade deal" with the UK after Brexit, saying there was "tremendous potential" to increase trade.

He added that "I think everything with a trade deal is on the table… [national health service] NHS or anything else, a lot more than that".

The comment drew immediate criticism, with Corbyn saying "that’s what Tory leadership contenders and Farage are lining up for the No Deal disaster capitalism plans they have … our NHS is not for sale".

The US is believed to want the NHS to open up to greater American competition in services and medical and pharmaceutical supplies.

Health Secretary Matt Hancock, another Tory leadership contender, said "the NHS isn’t on the table in trade talks and never will be, not on my watch".

And former Brexit secretary and leadership contender Dominic Raab said "the NHS is not for sale to any country and never would be if I was prime minister".

Asked about May’s potential successors, Trump said he had liked former foreign secretary Johnson "for a very long time and I think he would do a very good job".

He also praised Hunt as someone who would do a good job.

Trump will reportedly meet Hunt for a one-on-one meeting on Wednesday; as well as Gove, another major contender among a crowded Tory leadership field.

Trump said he didn’t know Gove, despite having met him in January 2017 when the senior Tory interviewed the then President-elect for The Times newspaper (reportedly with Rupert Murdoch also in the room). 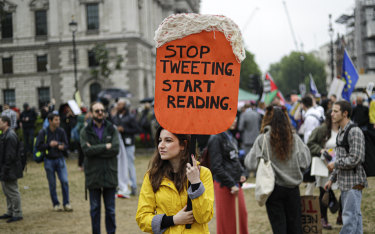 Anti-Trump protesters in London on Tuesday.Credit:AP

Asked about anti-Trump protests in London, Trump called it "fake news". He claimed there had been "thousands of people on the streets cheering" him and that "there was great love [apart from] a very small group of people put in for political reasons".

In fact there was a small group of pro-Trump supporters among tens of thousands of anti-Trump protesters around Westminster, Whitehall and Trafalgar Square on Tuesday.

The protests featured Trump effigies including the now-infamous Baby Trump blimp, a Trump in a pram, a Trump in a cage, and even a Trump face imprinted on a slice of toast. 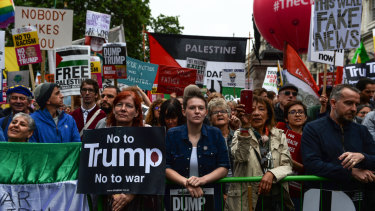 Protesters gather listen to Opposition Leader Jeremy Corbyn at an anti-Trump rally in London on Tuesday.Credit:Bloomberg

Trump also repeated a claim he has made previously that he had predicted Brexit "the day before it happened", either misremembering or misreporting the fact that he had welcomed the result of the referendum the day after the vote.

The day before the vote he had spoken in favour of Brexit but not tipped a result one way or another, saying "I don't think anybody should listen to me because I haven't really focused on it very much."