Nevada’s legislature recently voted to join six other states who send the ballots to every voter ahead of election day. 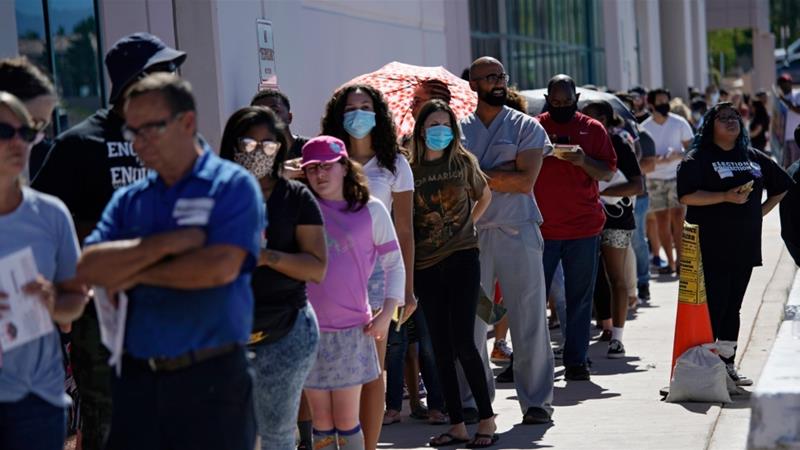 President Donald Trump has threatened to sue Nevada after Democratic politicians passed a bill that would send mail-in ballots to every voter ahead of November’s presidential election in light of the coronavirus pandemic.

Trump, who has claimed without evidence that voting by mail will lead to rampant fraud, wrote on Twitter on Monday that the legislation approved on Sunday was an “illegal late night coup”.

“Using Covid to steal the state,” he added. “See you in Court!”

Nevada mailed ballots to all voters ahead of its primary election in June and encouraged residents not to risk in-person voting. Most of the state’s polling places were closed, leading to waits of as many as seven hours in Las Vegas and Reno.

Nevertheless, 1.6 percent of residents voted in-person during the state’s primary, a tiny share compared with the 34.2 percent in the state who voted in-person in the November 2018 election.

Nevada Secretary of State Barbara Cegavske told lawmakers last week that she was not aware of any fraud in the June primary.

Election experts say voter fraud of any kind, including incidents related to mail-in ballots, is rare.

Last week, Trump suggested delaying the election due to the likelihood of fraud, though he does not have the authority to do so.

END_OF_DOCUMENT_TOKEN_TO_BE_REPLACED

END_OF_DOCUMENT_TOKEN_TO_BE_REPLACED
Recent Posts
We and our partners use cookies on this site to improve our service, perform analytics, personalize advertising, measure advertising performance, and remember website preferences.Ok