Two men in comas after ‘horrific, senseless’ attack in Carlton

Two men were attacked in a Carlton laneway the early hours of Saturday, with CCTV footage showing one of the victims clutching his head before crawling and collapsing on the ground.

One of the victims, a 26-year-old man, was set upon by a group of up to 10 attackers who stomped repeatedly on his head in Little Cardigan Street.

He was found unconscious and taken to hospital, where he remained in an induced coma on Saturday night.

The footage shows the man stumbling in the laneway before falling to the ground unconscious. The attackers can be seen casually walking away.

While searching for the attackers about 4am, police found the second victim, a 30-year-old Niddrie man, slumped against a building in Argyle Place near Lygon Street with three stab wounds to his abdomen.

Police believe up to 10 males in their late teens and early 20s were involved in what they have described as a “horrific” and “senseless” attack on the two victims, but as many as 20 people could have been part of the initial confrontation. 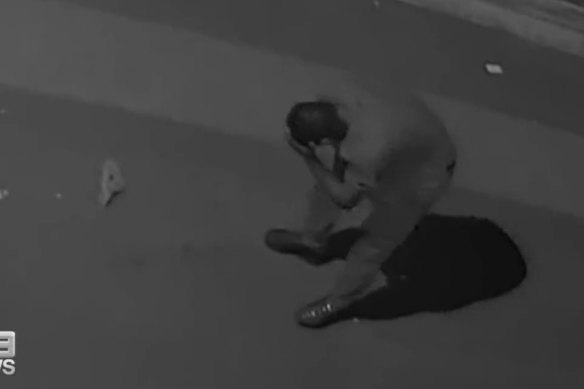 Footage showed a man stumbling in the laneway after an attack.Credit:Nine News

“The violence in this incident is horrific. It was a terrible, senseless act. One of the victims is unconscious whilst he’s been assaulted,” Detective Senior Sergeant Paul Topham said.

“They’re both terrible acts of violence that potentially could take a life.”

Local resident Chloe Farnsworth told Nine News she heard people shouting “fight, fight, fight” while one of the men was being attacked. 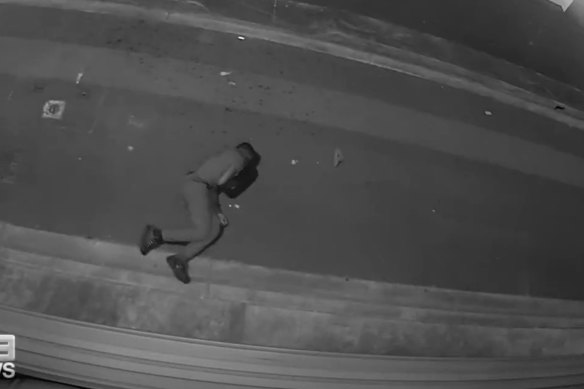 The victim fell to the ground, unconscious.Credit:Nine News

Police said the assailants fled the scene in cars before police arrived. No weapon has been found.

Both victims remained in induced comas in the Royal Melbourne Hospital on Saturday night.

“We’ve been unable to establish if there’s any relationship or all the parties are known to each other at this point,” Topham said.

Last weekend, police did a major sweep across Melbourne’s CBD and Carlton targeting people carrying weapons as part of Operation Omni, following a night of violence on October 30 when two brawls left one man dead and six others injured. 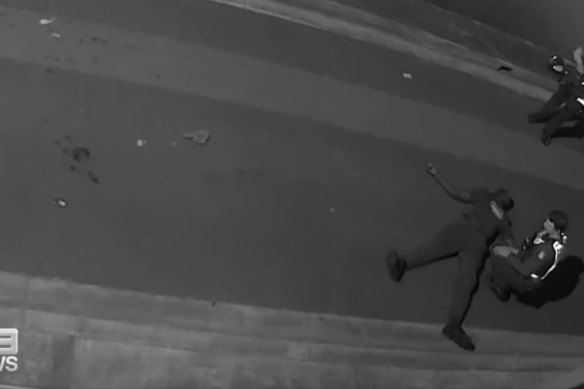 Police believe up to 10 males in their late teens and early 20s were involved in the “horrific” and “senseless” attack.Credit:Nine News